Automation And Inflation: An Uncertain Linkage

In many respects, economists are a little unusual. We think in odd ways, and we arrange data into odd patterns. We find it hard to reach conclusions without significant equivocation. We have difficulty explaining to others exactly what it is that we do.

Given the irregularity endemic to the vocation, I was therefore surprised to see a recent study suggesting economists were likely to be replaced by computers in the coming years. How will a machine be able create the kind of confusion that a human economist can? I guess time will tell.

The topic of technological advance was very much on the minds of the Federal Reserve and the Bank of England this week. (The former raised rates, while the latter opted to wait.) Automation may be altering the way that inflation evolves, causing frustration among central banks seeking to achieve their price level targets.

New equipment and new processes are taking root across industries, with the aim of increasing efficiency. And the possibilities for future transformation are impressive. But while the promise of technology is clear, its effect on present performance is much less so.

There is little doubt that firms around the world are innovating aggressively. The number of industrial robots in service has grown geometrically, while investments in artificial intelligence (AI) are expected to follow a similar path in the years ahead. 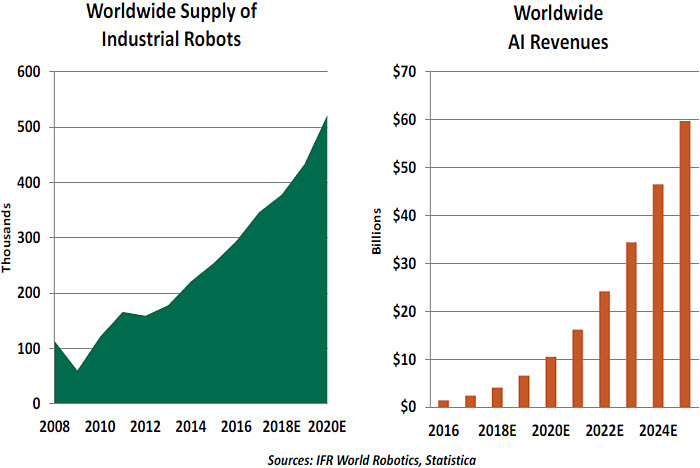 These developments represent the intersection of opportunity and necessity. Smarter machines can handle more intricate processing and reduce production times. “Bots,” programs that allow computers to do routine tasks, are having a similar impact on services. (Bots have gotten a bit of a bad name because of their role in election influencing, but Siri and Alexa have been generating more positive interactions with humans.)

The necessity of technology is rooted in aging populations. Slowing labor force growth places a premium on finding new ways to keep up output. As one might expect, the countries facing the most significant demographic challenges have made greater strides into digital assistance. China, among others, is moving aggressively in this space.

AI takes things a step further, enabling robots and bots to learn from experience. As an example, AI is being used to program autonomous vehicles; its ability to synthesize huge amounts of data and calibrate the instructions used to direct cars goes well beyond human capabilities.

The overall trends in automation are both exciting and concerning. It is truly amazing to contemplate what is being done and what lies ahead. But robots (especially sentient ones) also create a certain degree of apprehension. A recent film of robots learning to open doors was both amusing and a little chilling. (It reminded me of the scene from “Jurassic Park” where velociraptors opened doors.)

As we discussed in last summer’s essay “Automation and Anxiety,” this is far from the first time that machines have made inroads into the global economy. Past periods of technological advance created the same kind of mixed feelings that are present today, but they eventually paved the way to higher output, employment and standards of living. For instance, the rise of spreadsheets reduced the need for bookkeepers, but created more work for financial analysts.

Advanced technology has been cited as a governor on the price level, in two main ways. Firstly, digital approaches can increase output and reduce costs. And secondly, the possibility that computers will take on a wide array of functions currently executed by people may lead today’s workers to hesitate before requesting higher wages. Cashiers who press for higher pay might accelerate the adoption of kiosks to take their places. 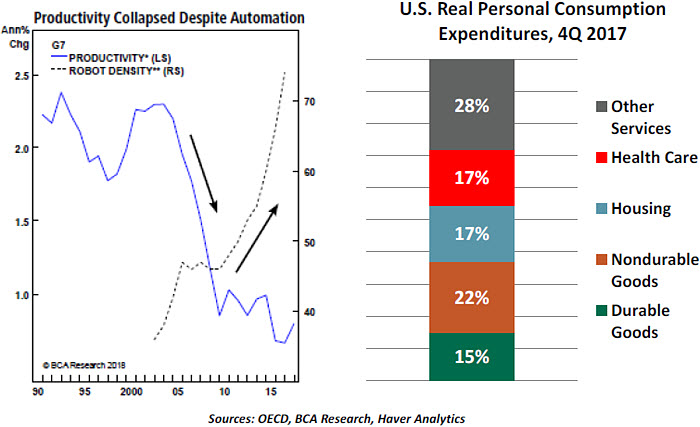 All of this makes intuitive sense, but the data are not yet aligned with theory. In the past decade, the increasing penetration of robots has coincided with a steep fall in the rate of productivity growth. This is exactly the opposite of what one might expect. Furthermore, people spend a substantial amount of their incomes on services like housing and medical care, which automation is finding more difficult to penetrate. Prices in these areas continue to escalate at a more normal pace.

To be fair, it can take time for new processes to make their impression on prices and inflation. But the number of robots is presently very small relative to the number of people employed in heavier industries. And bots are a relatively recent innovation whose impact on output and productivity is difficult to gauge. The penetration of automation
may grow over time, but it is beginning from a small base.

It should also be noted that while new technology stirs the imagination, reality can limit its advance. The autonomous vehicle program suffered a setback this week when a driverless Uber struck a pedestrian; this may lead to more curbs on progress. Technology requires strong infrastructure (broadband, electricity, etc.), and substantial additional investment will be required to bring it to full fruition.

In sum, progress to the new paradigm may be more gradual than sudden, and its effect on inflation may consequently be more modest than supposed. I am hedging my bets, though; I’ve been researching alternative careers that are less vulnerable to disruption. Dental school has been recommended, but I don’t think I could ever reach a definitive diagnosis.

Households around the globe have generally improved their balance sheets in recent years, but Australia and Canada are exceptions. In those countries, housing and household debt remain causes for concern.

Strong immigration levels, foreign investment, low interest rates and population growth have boosted demand for property in many countries around the world. Australia and Canada are special cases, given the influx of Chinese capital to those two nations. (Some of this was explicitly encouraged by government policy seeking inbound investment.) The Economist’s house-price indices for the third quarter of 2017 show prices in real terms to be around 44% higher in Australia and around 53% higher in Canada than they were in 2009.

The Economist’s comparison of house prices with their long-term relationship to individual incomes show that house prices are around 61% overvalued in Australia and 58% overvalued in Canada. When compared to long-term average rent, the situation looks even more stretched. As per the UBS Global Real Estate Bubble Index, Toronto leads the world in risk of a potential bubble, with Vancouver and Sydney also in the top five.

In response, Australia and Canada have implemented corrective measures that are beginning to take some steam out of the housing market. Examples of these include special taxes on foreign buyers of residential real estate, increased stamp duties for vacant units and restrictions on property flipping. China’s crackdown on foreign investment outflows will further help ease the pressure on property prices in these markets, but there are also fears that investments will dry up and cause a severe correction.

Rising house prices are not the only concern. Native residents wishing to buy into these richly valued markets have to take on sizeable mortgages to afford them. As a consequence, Australia and Canada also have record household debt, standing at around 210% and 162% of gross disposable income, respectively. 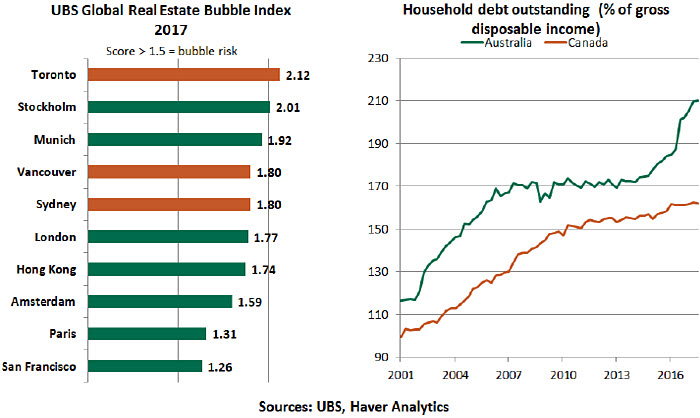 High levels of household debt are a risk for the banking systems in Canada and Australia. Though mortgage delinquency rates are currently low in both places and banks seem to be largely stable, the sheer scale of lending implies that loan performance will be a critical aspect for banks’ health and stability of financial system. A drop in mortgage performance could impair capital buffers and put bank balance sheets under stress.

Canada is among the economies most at risk of a banking crisis, according to early warning indicators assembled by the Bank for International Settlements, with its credit-to-GDP gap and debt service ratio flashing red.

Mortgages in both countries are vulnerable to rising interest rates. Australian loans carry variable interest rates, and Canadians need to refinance their loans every five years. As interest rates in developed countries continue to make their way upwards, this could cause discomfort to borrowers.

Rising interest rates, coupled with tighter macroprudential regulations, pose risks for home prices and household balance sheets. Policymakers will have to craft their policies in a way that tames price growth and household indebtedness without risking macroeconomic and financial stability. It will be a delicate process.

Putting the Ability Back in Disability

We have contemplated slack in the U.S. labor market previously. We seem to have located a new source of labor supply: some workers are overcoming disabilities to
re-enter the workforce. This is a welcome development.

To dissuade fraud, the Social Security Administration’s process to qualify for disability pay is stringent. Workers must be disabled for six months before receiving any benefits and must demonstrate a condition that will render them unable to work in any job for at least a year. For example, a plumber who suffers a leg injury and cannot visit work sites, but could work in the plumbing company’s office as a dispatcher, would not qualify for disability.

Workers who can recover and take jobs are encouraged to do so. However, given the hardship and months of effort required to reach this status, disabled workers rarely return to work. This trend is shifting, though. As of 2017, 10% of workers who were on disability one year prior have re-entered the workforce, a steady improvement since the low of less than 6% recorded in 2010.

Pay is a strong motivator. Disability payments are scaled to a worker’s average lifetime earnings. In 2017, an average disability recipient earned $1,060 a month, equivalent to $12,720 annually and scarcely above the poverty threshold for an individual. The highest earners who enter disability will receive a maximum benefit of only $32,244 per year. The value of this subsistence-level income is relative. For a worker suffering chronic pain or fighting a terminal illness, it’s a saving grace to afford food and shelter. For a worker with a more manageable condition, the opportunity cost of forfeiting that small income may be worthwhile if an accommodating, better-paying job is available.

The return of workers from disability helps to explain a surprising result in February’s employment figures. A net 313,000 jobs were created, but the unemployment rate remained steady at 4.1%. At full employment, job creation would mathematically lead to a decline in the unemployment rate (as more job seekers find work) and a spike in wages (as more employers compete for scarce labor). Though we do not believe most disability recipients have this option, the re-entry of marginally disabled workers back into the workforce is a positive sign for them, and for the economy.