This week, the White House signaled its intention to place punitive tariffs on imports of steel and aluminum. Markets and analysts reacted quickly, and negatively.

The move toward trade protection is not at all unexpected; the administration was elected on a platform of leveling the playing field with countries seen as playing unfairly. The aspiration is to promote American industries and preserve American jobs.

The measures previewed this week are an unusual starting point for the campaign. China has been a focal point of U.S. trade concerns, but we import relatively little steel from them. (And we are a net exporter of aluminum to China.) Some of our biggest suppliers of steel are our closest economic and strategic allies, including Canada and Japan.

We won’t know the specific details of the measure until next week. But it is likely that U.S. Commerce Secretary Wilbur Ross will have the authority to grant exemptions to countries that file appeals. This feature might tend to ameliorate the adverse consequences that might ensue. And because the measure does not directly confront the Chinese, it seems unlikely to be the flash point for a trade war.

That said, this week’s news is a troubling signal. Increased tariffs will raise the cost of raw materials and could add to inflationary pressures at a time in which markets are especially sensitive to them. Federal Reserve Chair Jerome Powell seemed calm about inflation prospects during his Congressional testimony this week, but the upside risk is clearly there. 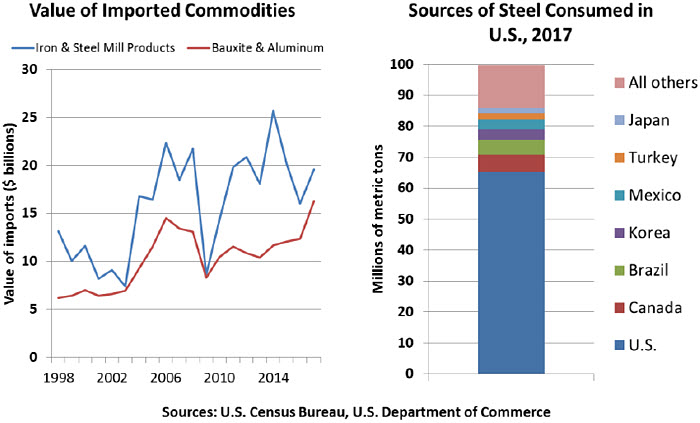 Many businesses in the United States use steel, and the measure would hinder their profitability, potentially limiting their willingness and ability to hire and invest in new equipment. Meanwhile, it will not be a simple task to ramp up U.S. production of steel and aluminum; a portion of American capacity is outdated and not cost-effective. The short-term impact on growth may be negative.

And finally, markets will certainly wonder what might be next. It could be that the administration is only putting trade partners on notice and will pursue further grievances at the bargaining table. But if more serious and provocative protection is forthcoming, it would be a serious concern for global economic performance.

We’ll have a more extensive analysis of the situation next Friday.

Vaibhav Tandon reports on the upcoming Italian election and its implications for the European economy.

I was out to dinner with my wife celebrating our wedding anniversary last weekend. For the occasion, we selected an authentic Italian restaurant. My wife, who usually takes the lead in choosing a main course, ordered the quattro formaggi pizza and soufflé ai tre formaggi. These recipes include a wonderful blend of Italian cheeses, and we enjoyed them immensely.

Unfortunately, Italy’s political parties do not blend as well as their formaggi. As Italian voters go to the polls on Sunday, they’ll have a broad menu of options to choose from. But it is unlikely that those favored by the balloting will be able to find the right recipe to boost Italian economic performance.

A year ago, when the eurosceptic wave was at an elevated level, the prospect of Italy heading to an election amid the rise of a populist party would have been enough to give the entire continent agita. Fortunately, stomachs are more settled now, thanks to the improving macroeconomic environment and toned down anti-EU narratives.

The Italian economy seems to be benefitting from the economic momentum in the wider eurozone and globally. Business confidence has been steadily improving; leading indicators have improved noticeably over the recent months. The manufacturing and composite Purchasing Managers’ Indices (PMIs) are close to their multi-year highs. 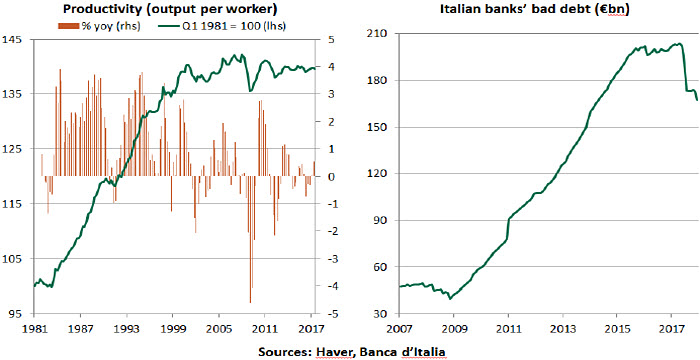 While Italian economic growth has improved, it continues to lag the progress of other European countries. Unemployment has fallen, but remains above 11%. Low productivity growth has been a key drag on Italy’s economy, and structural reforms are sorely needed.

Regardless of the outcome of Sunday’s election, the new government is unlikely to focus on pushing productivity. Pension reforms announced in 2011 that had helped make Italian labor more competitive could be at risk of being revoked. France is currently making a brave attempt to reform its labor markets, but it is unlikely Italy will elect leadership with the kind of mandate (and longevity) enjoyed by President Emmanuel Macron of France.

The Italian banking sector, a drag on the economy and a major concern for market participants over the last few years, is becoming more supportive. Credit to non-financial corporations increased sharply towards the end of last year. Bad debt has fallen by around €35bn to €167bn in December, the lowest in four years.

Although Italy has been reporting a current account surplus since 2013, the country has the second-highest public debt in the eurozone after Greece at 133 percent of gross domestic product (GDP), suggesting little room to increase spending. There are no immediate concerns over Italian debt sustainability, as the government has locked in low interest rates on its longer-dated debt. But with no progress expected on structural reforms and the future government likely to adopt an expansionary policy, Italy is unlikely to see a material shift in debt dynamics.
Immigration and economic policy are issues of contention in this election. Several hundred thousand migrants have entered Italy over the past three years from the Middle East and North Africa; while the flow has slowed, assimilation has also been slow. And Italians are among the EU citizens most discontented with the way the EU is dealing with their issues of concern. 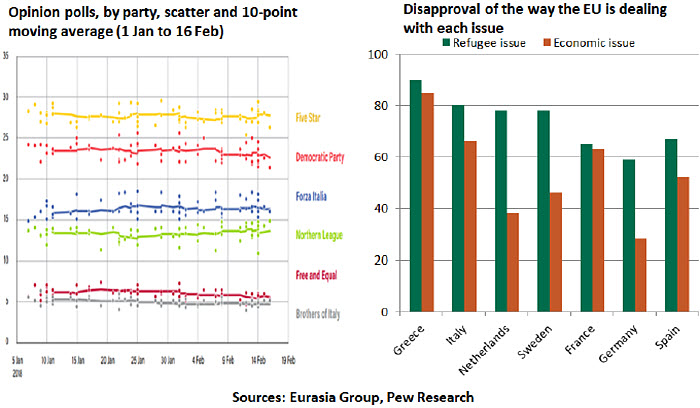 Given the political landscape and the new electoral system, the most probable outcome is a right-wing coalition comprised of Silvio Berlusconi’s Forza Italia (relatively more pro-business), the Northern League and the Brothers of Italy. An anti-euro or anti-establishment coalition led by the populist Five Star Movement (which is likely to emerge with the most seats in the Italian parliament), is much less probable.

Either way, there is little or no reason to cheer, as none of the potential coalitions is likely to be especially durable. With 65 governments in the past 72 years, Italy is cursed with congenitally unstable governments, making it difficult for the country to plot and sustain a clear course. If that course requires reform and austerity, it will be especially difficult to
implement.

While some economies can function well during coalition talks (this was the case in the Netherlands last spring and is the current case in Germany), a political void in Italy could do more harm. Italy’s bureaucracy is highly inefficient, and was listed as the most problematic factor for doing business in Italy in the World Economic Forum’s 2017 Executive Opinion Survey.

Though the economy is gathering momentum and is likely to continue progressing in the near-term, some of the structural issues such as low productivity growth and high debt levels will continue to act as a hindrance to Italian growth. This is not only a poor outcome for Italy, but as the eurozone’s third-largest economy, it serves as a drag on commerce throughout the region. And that is a complication for the European Parliament and the European Central Bank as they try to plot the continent’s economic course.

It seems strange that a country that stands for the finest things in industry, art, music and cuisine could face such severe economic struggles. Whomever Italy’s new leader is, the search for la dolce vita commerciale will be a top priority.

Cracking Down on Credit

During last October’s communist party congress in Beijing, Chinese president Xi Jinping promised a transition from “high-speed growth to high-quality growth.” Financial reform was a key plank in this platform, and Xi seems to be delivering it.

During the past decade, China accumulated an immense amount of leverage at the household, corporate and provincial levels. Easy credit facilitated the creation of excess capacity in industry and speculation in real estate. Incentives offered to regional governments and banks (maximize growth!) pushed them to remain aggressive.

Retail investors, whose wealth has increased significantly during China’s growth boom, have been willing participants. Many households own “wealth management products (WMPs),” whose high returns are tied to the performance of underlying assets. WMPs are often backed by real estate ventures and small businesses, making them quite risky;
nonetheless, they are sold through traditional banks, giving them a safer appearance.
A breakdown in the WMP market could initiate considerable contagion.

Most think China’s debt trajectory is unsustainable, but there has been a reluctance to address it. Curbing leverage means curbing economic growth, which was undesirable. As a result, stress has been building on Chinese financial institutions and markets. It takes strong leadership with a high degree of job security to take the tough measures needed. 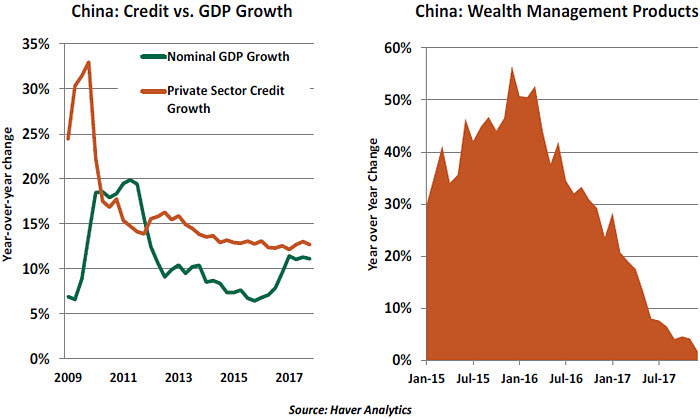 And that is exactly what President Xi has provided. His power within the communist party, along with the prospect of a very long tenure (China recently removed presidential term limits so that Xi can serve as long as he wishes), give him the backing and time needed to address financial imbalances.

Beginning last year, the Chinese central bank began tightening credit conditions. Interest rates were raised and new limits on leverage were enacted. Credit growth is moderating, and speculative investments have been curbed. Growth in credit is now much closer to growth in gross domestic product, and the WMP market has slowed to a crawl.

A new Financial Stability and Development Commission (FSDC) has been assembled, with a mandate to oversee systemically important financial intermediaries. Last week,
the FSDC moved to take over the Anbang Insurance Group. Anbang had been especially aggressive in its investing, taking stakes in high-profile properties and companies
worldwide. These adventures were funded with extensive leverage from banks and savers.
Anbang came to be a poster child of China’s financial excess, which made them a prime
candidate for intervention.

The resolution calls for the government to manage the company down to a more manageable scale and then return it to private hands. Debt will be swapped for equity and asset management companies will be formed to work through problematic investments. Losses will be borne centrally, so as not to invite contagion. In the hope of retrieving ill-gotten gains and sending a warning to others, the chairman is being prosecuted under anticorruption standards. The Anbang intervention may serve as a template for dealing with other Chinese firms that are too big to fail.

China’s financial reform program is the right move at the right time. But it presents two main risks. First, authorities must encourage enough caution to reprice risk, but not so much that it shocks investors. Transgressors must be called out, but faith in the system cannot be shaken.

Secondly, curbs on credit will almost certainly mean moderation in the pace of China’s expansion. This could create challenges for employment and profitability. Fortunately, China’s political structure allows it to take a much longer view of the situation; slower but more sustainable growth will prove to be in the country’s best interest.

A Chinese proverb says that one generation builds the street on which the next will walk. While the current road may be a bumpy one, China’s current policy path should pave the way for sounder financial progress in the future.