Since its recent high of $1,370 an ounce at the end of January, the price of gold has shaved off about $40 as Treasury yields continue to head north. The yield on the benchmark 10-year T-note is looking to cross above 3 percent, which would be the first time since early January 2014. This is a short-term headwind for the yellow metal that could reverse if inflation continues to rise more than expected, as it did in January. The consumer price index (CPI) increased 0.5 percent from the previous month, against forecasts of 0.3 percent.

A new report from the Federal Reserve Bank of New York indicates that U.S. household debt rose to a new all-time high in the last quarter of 2017. American families now owe a jaw-dropping $13.15 trillion, or roughly $40,000 per man, woman and child. That’s up 1.5 percent, or $193 billion, from the previous quarter, and up 8.5 percent from the high during the financial crisis.

Thirteen trillion is a head-spinning sum, but we can’t place all the blame on borrowers. For nearly a decade now, the Fed has kept interest rates at historically low levels, flooding the economy with cheap money. The good news is the rate of delinquency for all debt has fallen to prerecession levels.

But there’s one area that’s worsened since then—student debt, which now stands at nearly $1.4 trillion, the largest type of lending second only to mortgages. At the start of this year, about 11 percent of student debt was considered delinquent, or more than 90 days past due.

Americans aren’t the only ones loading up on debt, though. Last month, the Institute of International Finance (IIF) reported that global debt rose to a record $233 trillion in the third quarter, up $16 trillion in only nine months.

As much as $44 trillion is owed by households alone. And in some countries—most notably Switzerland, Australia, Norway and Canada—the amount of debt families have on their balance sheets is now greater than what Americans owed soon before the housing bubble.

Combined with overstretched asset valuations, these debt loads “could undermine market confidence in the future, with repercussions that could put global growth at risk,” the IMF writes.

Time to Add to Your Gold Exposure?

I see this growing debt bomb as just the latest sign that investors might want to consider adding to their gold exposure. The yellow metal has been sought as a safe haven during times of economic and systemic market risk, and I frequently recommend a 10 percent weighting, with 5 percent in gold bullion or jewelry and the other 5 percent in high-quality gold stocks, mutual funds and ETFs.

Since the Fed raised rates in December, the price of gold has been trending up, as it did in the previous two years following December rate hikes. A declining U.S. dollar continues to support the metal, which has consistently been hitting higher highs and higher lows so far this year.

The greenback is expected to remain lower for longer, with CLSA writing in a note to investors on Tuesday that it “is a casualty of strong risk appetite that has characterized financial markets since the start of the year.”

As for the monumental debt load, I can’t say when or whether it might burst. All I can say with certainty is that the bigger it gets, the greater the risk it presents. This, in turn, underscores the need for a reliable safe haven investment, which I believe gold is.

Turning to another metal, cobalt has made stunning moves on red hot demand, rising nearly 180 percent in the past three years. The brittle bluish-white metal is used in the production of lithium-ion batteries, which power our smartphones and electric vehicles (EV), among other things.

According to mining consultant CRU Group, cobalt demand exceeded 100,000 metric tons for the first time last year, and over the next 10 years, it’s projected to grow at a compound annual growth rate (CAGR) of 11.6 percent.

Because around two-thirds of the world’s cobalt is mined in the highly unstable Democratic Republic of the Congo, a supply shortage is likely brewing.

“There just isn’t enough cobalt to go around,” George Heppel, a CRU consultant, told Bloomberg in January. “The auto companies that’ll be the most successful in maintaining long-term stability in terms of raw materials will be the ones that purchase the cobalt and then supply that to their battery manufacturers.”

Automakers aren’t the only ones with this idea. Bloomberg reported this week that Apple, the world’s largest end user of cobalt, is in talks to buy the metal directly from miners, a move that could save the iPhone-maker many billions of dollars.

Although details are scarce at this point, Bloomberg writes that “Apple is seeking contracts to secure several thousand metric tons of cobalt a year for five years or longer.”

One of the miners the company is rumored to be speaking with is Switzerland-based Glencore, the 14th largest company in the world by revenue as of 2016, according to the Fortune Global 500. This would make sense, as Glencore—the best-performing London-listed miner last year, finishing up 41 percent—has been positioning itself as the go-to supplier of not just cobalt but other metals that are used in so-called clean tech, including copper, nickel and zinc. Glencore Announces $2.9 Billion in Dividends in 2018

Glencore stock jumped more than 5 percent on Wednesday after the company reported phenomenal performance in 2017 that CEO Ivan Glasenberg describes as “our strongest on record.” Earnings before interest, taxes, depreciation and amortization (EBITDA) rose 44 percent year-over year, from $10.3 billion to $14.8 billion, led by higher commodity prices and “enhanced” mining margins.

Sure to make investors happy, the company also declared a distribution of $2.9 billion, or $0.20 per share, to be paid in two installments this year.

The earnings report made no mention of Apple—or smartphones, for that matter—but it did emphasize the high rate of growth in electric vehicle investment, which is expected to greatly benefit cobalt demand.

“Global automaker investments now total more than $90 billion, with at least $19 billion attributed to the U.S., $21 billion to China and $52 billion to Germany,” Glasenberg writes. “Volkswagen alone plans to spend $40 billion by 2030 to build electrified versions of over 300 models.”

Over the next three years, Glencore’s cobalt production growth is projected at 133 percent, followed by nickel at 30 percent and copper at 25 percent.

Every year, the World Affairs Council of San Antonio (WACSA) names a local leader as the International Citizen of the Year for his or her contributions to the international community and for exemplifying global citizenship. I was honored and humbled to receive the award in 2009, and to this day I still think of it as one of my proudest accomplishments.

Last night I had the opportunity to see the award go to Joe Straus, Speaker of the Texas House of Representatives. In an age when partisan divides seem only to be widening, making it more difficult for Americans to find common ground and compromise, Joe is the rare pragmatist who truly serves his constituents rather than an ideology. He’s often been at odds with the more far-right faction of his own party, going so far as to block the consideration of a controversial “bathroom bill” similar to the one in North Carolina that was ultimately repealed.

I’d like to extend my sincerest congratulations to Joe, and I look forward to seeing what he chooses to do after the end of this term. (He announced recently that he would not seek reelection.)

Finally, I’d like to say that I thoroughly enjoyed hearing from the night’s keynote speaker, presidential historian Jon Meacham, whose biography of Andrew Jackson, American Lion, won the 2009 Pulitzer Prize. I was impressed with the scope and depth of his knowledge of not just Jackson but American politics as a whole and the ways in which the office of president has changed over time. He’s also very witty and amused the audience with his impersonation of former President George H.W. Bush, the secret to which, he told us, is to do Mr. Rogers doing John Wayne.

Have a blessed weekend! 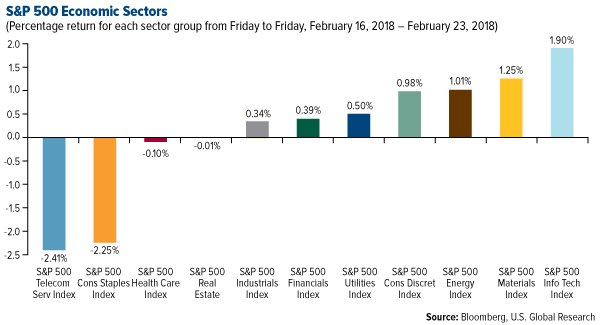 This week spot gold closed at $1,328.75, down $18.35 per ounce, or 1.36 percent. Gold stocks, as measured by the NYSE Arca Gold Miners Index, ended the week lower by 2.85 percent. Junior-tiered stocks outperformed seniors for the week, as the S&P/TSX Venture Index came in at 0.49 percent. The U.S. Trade-Weighted Dollar strengthened this week and rose 0.88 percent.