In all the places I have traveled in the past year (and there are a lot of them), investor sentiment has been similar. Gratitude at the amazing returns has been tinged by nervousness over the height of asset values and the dearth of volatility. Termed by The Economist as the “Bull Market in Everything,” the cycle seemed ripe for a correction. Some actually expressed a hope for one, to prompt additional perspective.

It is said we should be careful what we wish for, because we just might get it. Beginning late last week, stocks finally stepped back. Market declines of 5% and even 10% occur with some regularity, even in the midst of long bull intervals. But because it has been such a long time since one had happened, the associated nervousness was amplified. Some in the media even went so far as to suggest that something systemic was in the works.

My colleague Jim McDonald covers the market angle well in his piece “The Return of Volatility.” In this column, I will examine the root causes of the market’s collective concern and assess whether the alarm is justified.

Asset prices have benefitted importantly over the past few years from low interest rates. Nearly a decade after the financial crisis, monetary policy in developed markets remains extraordinarily accommodative. Overnight interest rates are still low and central banks continue to carry large balance sheets. As a result, long-term interest rates across countries have been well below historical norms. 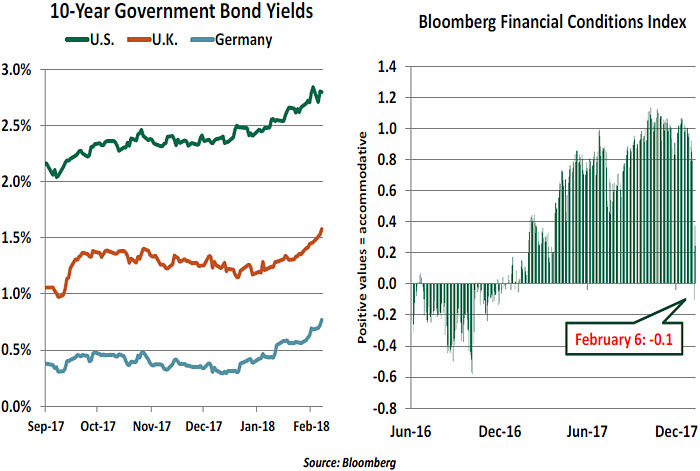 Last fall, the strength of the global economy prompted bond market participants to reevaluate. Ten-year yields in the U.S. are 80 basis points higher since last September, and sovereign yields in other markets have also moved upward. That led to worry that one of the foundations of asset price increases was cracking.

It bears mentioning, though, that interest rates remain low by historical standards. And if interest rates are rising because global economic strength is generating demand for capital, that combination of circumstances should be supportive for markets.

Nonetheless, the anxiety over rising interest rates was in the background when the U.S. employment report came out last Friday. Within the release was the highest reading on wage growth in nine years. This single number appears to be the leading suspect in the search for the root cause of the correction.

Faster wage growth is not at all unexpected. U.S. unemployment is just above 4%, and unemployment in other parts of the world has been declining. Reports of wage pressures have been mounting, and business surveys reveal an expectation that retaining talent will require paying up. Forecasters and central bankers have factored this into their estimations of future inflation.

Even if wages rise more rapidly, the historical link between wages and inflation is weak. During the past two expansions, wage growth reached a 4% annual pace without creating much (if any) pressure on the overall price level. 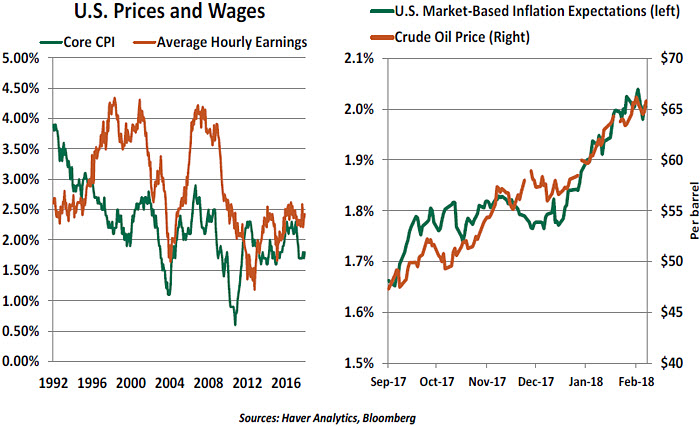 Argentina: In contrast to the effects of accommodative policies in much of the region, Argentina’s interest rates are moving higher. Inflation, an old menace in Argentina, has led to monetary tightening, while the peso has depreciated against the dollar. A weaker currency alongside dollar-denominated debt buildup demands caution.

Mexico: Appreciation of the Mexican peso combined with rising interest rates has played an important role in reducing the burden of public debt. Higher oil prices improve the fiscal position but also increase its trade deficit. Mexico has been a net oil importer since 2014.

Venezuela: While other major LATAM economies are growing, Venezuela is still mired in a deep and prolonged recession with hyperinflation. Irresponsible policies, a shortage of dollars due to low oil prices (and output), curbs on imports and widespread shortages are together impairing not just Venezuela’s economy, but its overall quality of life. Given sizeable
upcoming debt repayments and a chaotic exchange rate regime, the economy is unlikely to recover anytime soon.

Beyond their economies, political risk in this region is sizeable, particularly in Brazil and Mexico. Brazil’s prolonged political crisis (triggered by the impeachment of former president Dilma Rousseff) is likely to persist until its October 2018 elections. In Mexico, a victory of the left-wing populist Andrés Manuel López Obrador in July would pose a major threat to the structural reforms undertaken by outgoing president Enrique Peña Nieto and further complicate discussion of the North American Free Trade Agreement (NAFTA).

Given the trade linkages between LATAM and the developed world, events in these markets bear watching. We’ll certainly be following them, and will keep you updated.

I was not invited to last month’s World Economic Forum (WEF) in Davos, Switzerland. Judging from the press coverage of the event, it was my loss; a virtual Who’s Who of world leaders was there to offer reflections on how to improve the state of the world. The program included panel discussions on a broad array of topics including global health, energy, technology, immigration, education, conservation, diplomacy and (of course) economics. Scarcely any subject of human interest went unaddressed.

The sessions included an impressive array of discussants, many of whom have devoted their lives to their disciplines. They approached their assignments in the spirit of George Bernard Shaw, who famously said: “You see things; and you say ‘Why?’ But I dream things that never were, and I say “Why Not?’”

It’s inspiring to imagine a more utopian world, where good ideas are the coin of the realm and global divisions are manageable. The speeches provided a welcome departure from the seemingly intractable challenges that dominate policy discussions and media attention.

Tellingly, though, this year’s gathering was entitled “Creating a Shared Future in a Fractured World.” Unfortunately, the messages emerging from conclaves like Davos are increasingly at odds with broader public sentiment in many countries. Globalization and immigration have become four-letter words, and the regard for experts and expertise is in decline. Borders are getting thicker, not thinner; and the world’s elite are seen as being increasingly out of touch with the bulk of the population. (Jamie Dimon, Chairman of JPMorgan Chase & Co., once said Davos was best described as “where billionaires tell millionaires what the middle class feels.”)

Given that an uncomfortably large fraction of the world’s population would be overjoyed to join the middle class, it seems even less likely that the luminaries are in sufficient touch with those who live in the lowest deciles. To sustain support for globalization and high-minded approaches to global challenges, organizations like the WEF must do a better job of enunciating how (and when!) these prescribed remedies will improve the lots of those seeking a clearer path to prosperity. Until then, even the best of sentiments expressed in Davos will dissipate quickly into the Alps.