Ryan takes a look at the recent dynamic around the U.S. dollar.

I married into an internationally dispersed family, and my European wife has helped me widen my perspective of the world beyond the United States. This comes at a cost, though, in the form of international travel to see her family. Lately, we have been discussing whether 2018 will be the right year to begin taking our family to visit her relatives in Germany or France. Setting aside the difficulty of traveling with three young children, I hesitate at the cost—which, of late, has only grown steeper.

For more than a year, the U.S. Dollar (USD) has been losing value relative to most other currencies. When asked about this trend this week in Davos, U.S. Secretary of the Treasury Steven Mnuchin seemed unconcerned, and even supportive. This began a nervous forty-eight hour period that illustrated the anxiety that currency values can create. Ultimately, though, we expect the situation to have little impact on economic activity or asset prices.

The value of the USD has declined not only relative to most major currencies, but also when considering the trade-weighted dollar, an index of the USD’s value against all its major trading partners. In the context of a well-performing economy and rising interest rates, we would expect steady or increasing exchange rates. Why has the dollar depreciated? 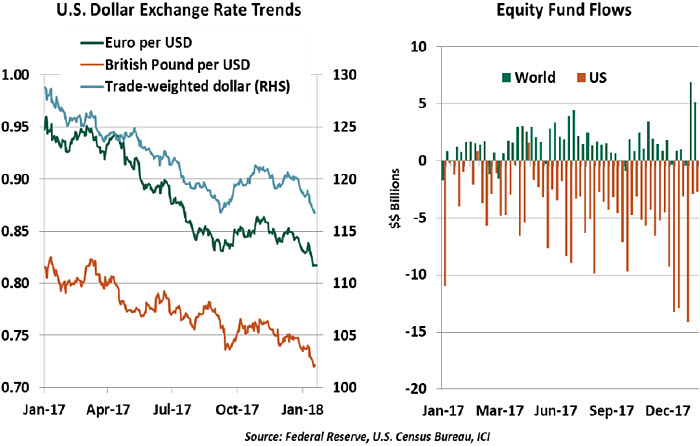 Exchange rates are determined by the demand for products, services and debt denominated in one currency relative to another. Debt issuance, sovereign rate guidance, debt ratings changes and trade imbalances all affect the valuation of currencies.

In the case of the recent decline of the USD, capital flows seem to be a main driver. It’s not that U.S. asset markets are falling behind; instead, other markets have risen. In all major centers, we are seeing solid growth in manufacturing activity as well as optimistic consumer and business sentiment. Investors have the luxury of bountiful investment choices, globally. Equity fund flows bear this out: most weekly net investment flows in 2017 were negative for the U.S., but positive for the rest of the world. Essentially, the U.S. has gone from being the source of the best investment opportunities, to merely being one of many great destinations for capital. The dollar’s slide can be at least partially attributed to this change.

Furthermore, while U.S. long-term interest rates remain much higher than those in Europe, the differential between sovereign yields has narrowed. This has prompted some reallocation away from the U.S. and its currency.

This situation with the U.S. dollar could easily continue for a while, given the age of the U.S. expansion and strengthening growth in Europe. While this will be interesting for participants in foreign exchange markets, we do not believe it will have a great impact on the U.S. economy. Ultimately, trade flows, the movement of goods and services across borders, may not be influenced much by the recent realignment in exchange rates.

International businesses are adept at managing their exposures to foreign exchange fluctuations. Financial instruments such as foreign currency options can be used to limit the downside risk of exchange rate movements, allowing firms to keep prices constant without sacrificing margin. Furthermore, finished goods may be priced with sufficient margin to absorb routine changes in exchange rates, and foreign producers selling into the U.S. may decide to accept a thinner margin to sustain market share. Global supply chains move parts all over the world; a finished product may already be an assemblage of foreign exchange transactions before it is even sold. 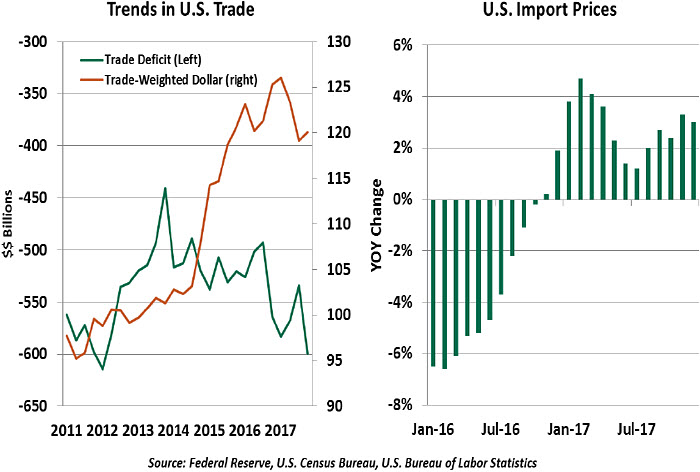 The U.S. trade balance demonstrates the disconnect between exchange rates and economic activity. The U.S. is a net importer, running a negative trade balance continually for decades. Since 2011, the dollar has fluctuated—from stagnation coming out of the Great Recession, to strength as the U.S. recovery led the world, to the decline we are focused on today. These fluctuations have had little apparent impact on net trade flows. If anything, the trade deficit has only increased in 2017, despite a weaker currency that should theoretically reduce our import volumes.

Import prices tell a similar story. Prices declined through most of 2016 as the USD held its strong position. In 2017, prices started to grow, coinciding with the USD’s decline in value. Yet as the USD’s fall continued through 2017, the rate of import price increases slowed, illustrating that there are more than simply exchange rate factors at play in global competitiveness.

Counter to this, Secretary Mnuchin stated last Wednesday that “A weaker dollar is good for trade.” This was a significant departure from past statements from the Treasury, which needs to maintain demand for dollar-denominated debt. Foreign investors who purchase Treasury securities face exchange rate risk when those securities come due; if the dollar weakens during the term of the instrument, returns are diminished.

Under the recent U.S. tax legislation, the U.S. debt is poised to increase. Foreign investors may be hesitant to purchase securities if they expect a fall in the dollar’s value. Administration officials scrambled during the week to backtrack on Mnuchin’s comments and have hopefully learned an important lesson about communicating about currency markets.

Foreign exchange rates have momentum. A low rate will tend to stay low until some news gives market participants a reason to change their expectations. As long as the global economy continues performing strongly, we see no reason to expect an upswing in the dollar’s value—nor any relief for the looming cost of a European vacation.

Robust world trade growth has been a key engine of global expansion over the last few quarters. This bodes well for many emerging markets (EMs), particularly those dependent on commodity exports and those that are integrated into global manufacturing supply chains. In fact, EMs made a large contribution to the trade recovery in 2017, constituting at least half of world trade growth. Leading indicators such as the global manufacturing Purchasing Managers Index (PMI) suggest even better times ahead.

Though China’s growth momentum has slowed somewhat, its remains the primary engine of global exports. Outside China, rising imports in Brazil and Russia, marking the end of a deep recession, have also underpinned EM trade.

The U.S. dollar’s recent weakness has provided modest cause for concern. EMs usually prefer a stronger dollar, which makes their exports more competitive. However, the dollar’s value is only one of several determinants of trade flows, and in many cases, not the most important.

The data illustrate the ambiguous relationship between EM exports and the dollar. There have been numerous phases in which EM trade and the U.S. dollar have moved in the same direction, but the stronger dollar in 2015 and 2016 coincided with weak trade in several EM countries.

Clearly, other factors are at play. These include demand from the advanced economies and the pace of expansion of global value chains. As mentioned in our first article, the dollar’s recent weakness has been the result of strength in other centers, particularly Europe. This cyclical upturn in the U.S. and euro area supports all exporting countries.

There is optimism that this trend could continue, which in turn could push investment growth in the EMs. However, there are still reasons to be cautious about the trade outlook beyond the next few quarters. Protectionist sentiment has been rising over the last two decades, especially since the financial crisis, as measured by the higher trade barriers to exports reported by the German IFO and rising trade concerns reported to the WTO. 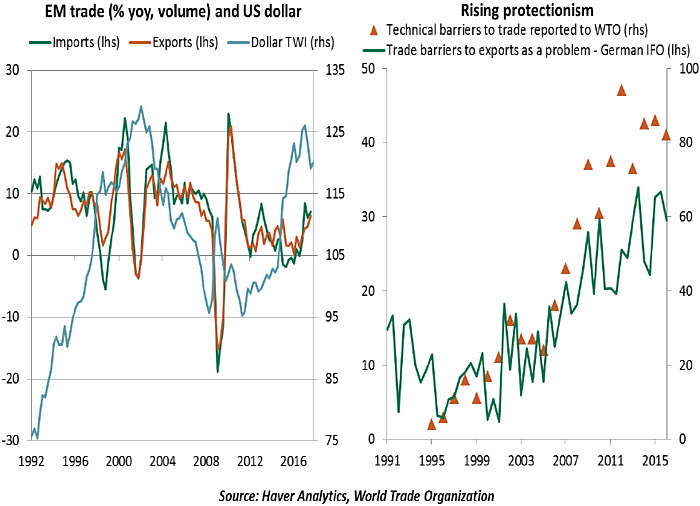 Unfortunately for EMs, America is not the only country seeking to put itself first in the arena of global trade. Trade barriers alone are strong enough to offset the impact of exchange rate movements on EMs. Tariffs, quotas and other measures are clearly on the rise.

Several crucial trade conversations lie ahead; the North American Free Trade Agreement (NAFTA) discussions, Brexit negotiations and China/US bilateral talks will hold the key for the future course of global trade. Though we do not anticipate any breakdowns, there is a risk that trade conflicts arising from one or all of these discussions could challenge the nascent recovery in trade-dependent EMs. And that could spell trouble for those countries
that have not managed leverage well. (See our piece Emerging Markets Are Taking On More Debt.)

Based on this evidence, we conclude that when a large developed market currency like the U.S. dollar moves, its effect on global flows may not be as strong or obvious as one would think. Far more important is the tone of trade, which is at risk for re-evaluation.

Are you looking for a stock with a ton of upside, but want to avoid low-quality names? We have just the solution for you: the Swiss National Bank (SNB). Believe it or not, one of the world’s most prominent central banks generated 200% returns for its shareholders last year.

All central banks around the world own securities, but they are most often sovereign bonds denominated in the local currency. Keeping the portfolio simple avoids favoring a particular firm or sector and minimizes risk.

The SNB presents a clear exception. Twenty percent of its holdings are allocated to equities, held in the form of individual shares. Most are denominated in currencies other than the Swiss Franc. And on the top of the list are some of the hottest technology stocks.

The SNB also differs sharply from most other central banks in that its shares trade openly on financial markets. A little less than half the stock is held by the public. Dividends have been fixed (by law) at the same level for almost 100 years.

Switzerland has a prominent place in the global financial system, but its economy is small. There aren’t sufficient Swiss franc assets for the SNB to own exclusively, so it must look outside its borders. Keeping the Swiss franc from appreciating too much is one of the SNB’s objectives; buying foreign assets is one way of achieving this goal. With other
central banks absorbing much of the available sovereign debt, the SNB has chosen to
extend into other asset classes.

So far, the success of the SNB portfolio has deflected concerns over its propriety. But there are those who worry about the effect of a market correction on the bank’s holdings. For now, however, the SNB’s performance would make an active asset allocator proud.