As many employees do at the start of the year, last week I sat down with my boss to set targets for 2018. He insisted on keeping many of the objectives he had established last year: forecasts for all variables must be precisely accurate, I must present our commentary in six languages, and standing ovations are expected at all presentations. Standards are important, but these may be set too high.

Most central banks have targets, too. And judged solely by the numbers, monetary policy would be assigned a substandard rating. Going forward, the question for monetary policy is whether to adjust targets or work harder to achieve those currently in place.

Formal inflation targeting was first adopted by the Reserve Bank of New Zealand in 1989. Canada followed the next year, and the United Kingdom the year after that. The U.S. Federal Reserve ultimately adopted a target in early 2012.

Inflation targeting has many merits. By providing an anchor, it improves the transparency of central bank decision-making, gives comfort to investors and provides forward guidance on how a central bank might react.

Central banks in developed markets have deemed an inflation rate of 2% to be ideal for price stability. In order to avoid period bouts of deflation, there is a reluctance to set the target much lower than that; once in place, deflation can be difficult to dislodge, whereas a number of tools are available to tame excessive increases in the price level. 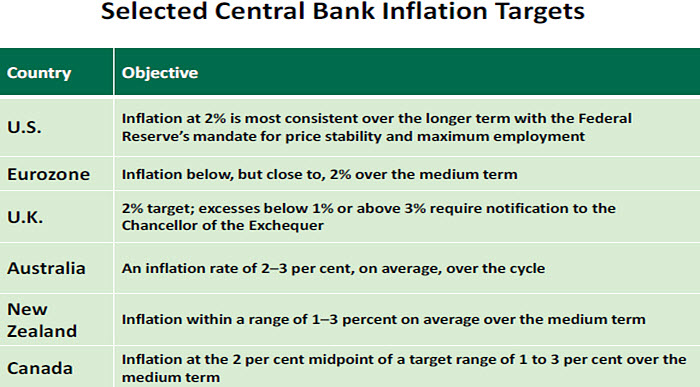 The global symmetry of the 2% objective is interesting. Inflation can evolve differently in different places; this might have warranted some heterogeneity in global target levels. Central banks have, however, used the phrasing of their targets to create room to maneuver. Some give themselves ranges of acceptable outcomes; others give a vague time horizon over which compliance is to be achieved.

The assessment of inflation is typically forward-looking, relying on a forecast of future price levels. Even if current readings are out of range, no immediate reaction is required if further inflation is expected to reach the desired state. Essentially, while targeting regimes may seem rigid on the surface, they allow for considerable discretion in their application.

The fact that inflation is not easy to measure does not help targeting regimes. Collecting accurate prices, adjusting for changing features and accounting for shifts in the “basket” of things in an index are among the many challenges economic statisticians face. Determining which components are more transitory and which are more stable is an
additional complication.

Furthermore, the advance of globalization and technology can limit the ability of a central bank to steer the price level by altering local credit conditions. A goal that seemed attainable when established may now be less so.

With the notable exception of the Bank of England (which is coping with the aftermath of Brexit), central banks in major markets have struggled to meet their inflation mandates despite years of low interest rates and massive quantitative easing programs. 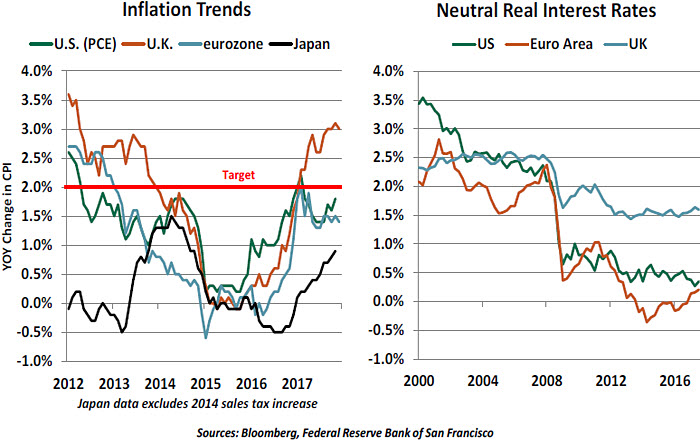 Keeping rates lower (or in the case of the European Central Bank, negative) for longer to promote higher inflation introduces two risks. The first is asset price excesses, which can form as investors reach for return. The second is that holding rates down during expansionary phases leaves little room for central banks to react when the next recession comes. While unconventional policies like forward guidance and quantitative easing can always be called upon in these cases, their effectiveness is in doubt.

Since 2008, there has been a collapse in “neutral” interest rates (levels which neither stimulate nor hinder economic activity). This development is due, in part, to slower potential for economic growth that limits demand for credit across the cycle. If neutrality is lower, interest rates will spend more time near zero than central banks would prefer. Researchers conclude that frequent trips to the lower bound could prolong recessions and result in permanent losses of output.

There is, therefore, a growing urgency to create additional “dry powder” to address the next downturn. To that end, some have suggested boosting expectations by raising the inflation target. Others have proposed targeting the price level (as opposed to an inflation rate), which would force central banks to steer so low inflation in one interval is offset by higher inflation in others.

In theory, either of these steps would lead to higher current inflation expectations and inflation, raising nominal interest rates and providing room for central banks to ease when necessary. But in order to work, any new rule must be seen as credible. If central banks have struggled to hit 2%, it would be difficult to convince markets that inflation will be steered to 3% when called for. And implementing a new targeting regime today would
suggest that central banks stay easier for longer than some think prudent.

The academic discussions around inflation targeting are fascinating. (Those wishing to indulge will enjoy a recent Brookings program on the topic.) But the likelihood of a change in course this year seems low.

Whether for me or for central banks, the best goals are measurable and attainable. It is not clear that inflation targets fully satisfy these criteria at present. And so they should be applied carefully in the current conduct of monetary policy.

Now, if you will excuse me, I have to translate this note into Swedish.

The past several years have been a great time for asset owners. Most indicators point to a global economy that is thriving: employment is high, inflation is stable and consumer and business sentiment surveys show high scores. Against this backdrop, we ask: Do you feel wealthy?

Wealth effects are the changes in a person’s financial behavior resulting from a change in that person’s net worth. Simply stated, portfolio gains can allow households to spend more of their current income. Our healthy fiscal environment suggests many Americans should feel positive wealth effects and that this year should present a strong tailwind for consumer spending.

Equity indices had a breakout year in 2017, reflecting the likelihood of U.S. tax reductions and optimism in continued demand for goods and services. The effect of this increase is felt by anyone who owns stocks, directly or through a retirement savings account. Even the most dispassionate long-term investor would strain to ignore a 19.4% portfolio gain like the S&P 500 saw in 2017.

Meanwhile, house prices have been on a steady ascent since 2011. Homeowners who weathered the recession will find their homes are now near the peak values seen a decade ago. First-time homebuyers who entered the market in the last few years have already realized substantial gains.

It should be noted that equity and housing wealth are somewhat illiquid. Stocks are often held in retirement accounts; drawing down retirement savings before a certain age incurs substantial penalties. We can borrow against our retirement savings or home equity, but these are loans, not dividends. Consumers are gaining wealth on paper, but not yet in our wallets.

But this does not diminish the power of wealth effects. Regardless of any changes to our income or debt positions, we feel wealthier. And the presence of strong reservoirs of saving for the future allows a greater propensity to spend today. Past research into consumer attitudes toward spending shows that the wealth effect is real. For every $100 gain in a consumer’s home value, they will spend $8. For every $100 gain in a retirement portfolio, they will spend $3. 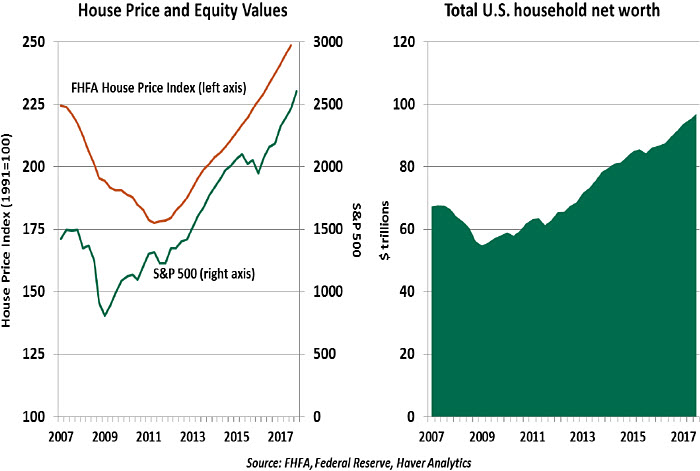 Unfortunately, not everyone has enjoyed the gains from the ascendant markets. This essay has focused on equity holdings and house prices. Not all of us have positions in those markets. According to the Federal Reserve’s Survey of Consumer Finances, only 52% of Americans have retirement savings, and a recent Gallup poll found 54% of adults owned stocks directly or through a retirement portfolio. Nearly half of the country has seen the stock market boom pass them by.

Meanwhile, in the course of the economic recovery, the U.S. homeownership rate has fallen steadily. The market needed years to work through consumers facing foreclosure, and tighter lending standards prevented many marginal borrowers from obtaining mortgages. The rate of homeownership reached a near-record low of 62.9% in 2016 and
has grown only slowly since then. Consumers who have been renting their homes, by
choice or by circumstance, have not felt any positive impact of the house price recovery.

We end this note with a word of caution. Wealth effects of housing were first articulated by John Quigley, Karl Case, and Robert Shiller (the latter two of whom are also responsible for the well-known Case-Shiller house price index). They established the strength of rising house prices as a positive predictor of consumer spending. In 2013, they revisited their seminal paper by looking at behavior through the Great Recession and found the relationship works both ways: declines in housing wealth do lead to a significant drop in spending.

The current boom cycle will not last forever, and we cannot predict how consumers will react to a downturn after years of stable growth. But in the coming year, wealth effects should certainly be a powerful force for economic activity.

Recent news of the Bank of Japan (BoJ) trimming its monthly purchases of longer-dated government bonds led to sharp movements in exchange rates and global yields. This is due partly to the fact that the BoJ, unlike the European Central Bank (ECB), has not provided formal forward guidance on its quantitative easing (QE) program. Hence, the trimming of monthly purchases led to increased expectations (particularly overseas) that the BoJ could move to normalize interest rates sooner than previously expected.

In our view, this was a technical move rather than a signal of policy shift. In fact, the BoJ’s purchases of Japanese government bonds (JGBs) have declined noticeably since the second half of 2016, when the BoJ switched its policy framework to targeting interest rates from the size of the monetary base. Given its already large amount of JGB holdings (around 40% of all government debt), the BoJ, in our view, has little choice but to continue with the gradual reduction of bond purchases.

Though the JGB purchases are on a declining trend, the BoJ has doubled its purchases of exchange traded funds (ETFs) since 2016 (see below chart), thus boosting stock prices and leaving the BoJ vulnerable to stock market movements.

The Japanese economy continues to prosper as a result of stronger exports and improved business investments. Against this backdrop, clamor for policy tightening is likely to grow further. But, as inflation remains far from the 2% target as a result of weak wage growth, the BoJ is expected to maintain its QE efforts.

While we cannot entirely rule out possibility that the BoJ will fine-tune its policy by year-end, it will remain cautious of the fact that an early policy tightening would push the yen higher and potentially derail the economic momentum and progress on inflation.