December used to be a month that allowed time to unwind and reflect. The pace of news would slow, trading would ebb and the most challenging thing facing office workers was the annual purge of unneeded files. Companies would throw lavish holiday parties, the stories from which would form the core of committee discussions during the latter weeks of the year.

Times have changed, in more ways than one. This December has been especially hectic, with the transition in Brexit negotiations, U.S. tax reform debate and Bitcoin setting new highs every few minutes. Still, we’ve tried to pull ourselves away from current events to identify the most significant economic themes of 2017.

Economics 101 is pretty clear on one point: if demand accelerates, prices should rise. This year, however, that relationship was turned on its head. Despite accelerating expansion in many countries, inflation remains muted. (Great Britain is the exception, with Brexit exacting a toll on the value of the pound.) 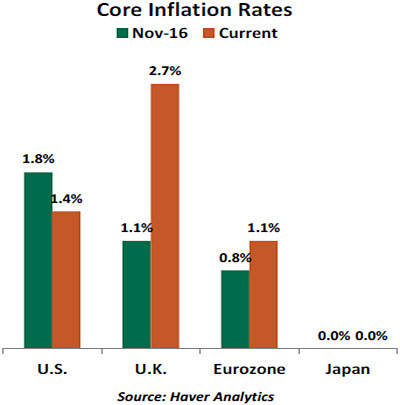 There are many theories that attempt to explain this apparent conundrum. In her final press conference this week, Federal Reserve Chair Janet Yellen suggested that most of inflation’s retreat has been due to temporary factors. Among them was the re-benchmarking of prices for cellular telephone service and prescriptions, which had a pronounced impact this spring. However, the global nature of disinflation suggests that more than measurement issues may be at play.

Automation has been thrown out as another factor holding prices back. Few would disagree that computers and machines continue to advance efficiency, and new developments in artificial intelligence promise more in the years ahead. But the rather abrupt retreat of inflation would suggest a sudden impact, and technology usually exerts its influence gradually over time.

Automation of another kind is likely having a prominent effect. The impact of online merchants and the proliferation of online information have given global consumers extra leverage. Known in some quarters as “the Amazon effect,” this phenomenon has driven goods prices down. But service prices are more insulated from online disruption, and comprise a significant fraction of inflation indexes. And the Amazon effect may be a one-time change in structure whose effect on prices may fade over time.

Finally, the failure of wage growth to respond to low levels of joblessness in many nations has been a puzzle. Full employment has arguably been reached in the United States, Great Britain, Germany and Japan; but rates of pay increase in those countries have barely budged since 2014. Sluggish productivity growth, low inflation expectations (which causes wage demands to moderate) and corporate resourcefulness have combined to produce this outcome.

When will transitory factors fade? Will workers become emboldened? Will capacity become a constraint? Markets and central bankers will be following these narratives very closely in 2018.

Last year, we witnessed a global re-emergence of populism. Politicians found that voters were receptive to platforms promising protection for domestic industries, reductions in immigration and the placement of national interests above global cooperation. This was more than rhetoric: British voters’ approval of a referendum to exit the European Union was a shock to many observers, and protectionist policies were fundamental to Donald Trump’s presidential platform. 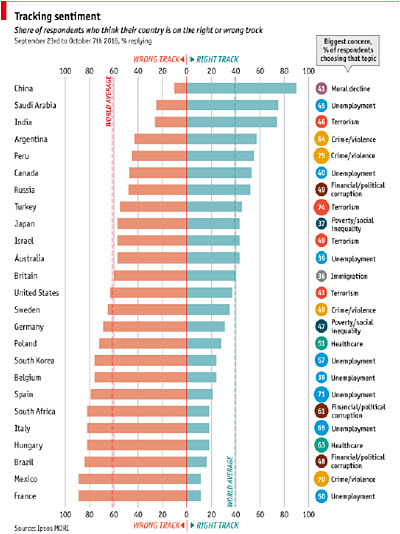 Elections in 2017, however, failed to sustain the populist momentum. In France and the Netherlands, support for the populist candidates fell behind those with more mainstream views. More recently, German Prime Minister Angela Merkel won re-election. But her majority has diminished and parties with less-mainstream views have advanced. They key takeaway is that the populist movement may be latent, but it has not disappeared.

The turn to populism has had consequences for those countries that embraced it. Brexit continues to create uncertainty for the United Kingdom. The U.S. administration has taken a tough tone on trade, which generated consternation at this week’s meeting of the World Trade Organization.

And 2018 promises to be an exciting year for political spectators. Italians will return to the polls next spring; Brexit negotiations over trade terms will be ongoing; and the U.S. will have midterm Congressional elections in November. The decisions voters and world leaders are making today will require years to fully assess. We are watching history in the making, but we may not know how the chapters will evolve for quite some time.

The past year’s news brought us a series of sad headlines and images from natural disasters. Our readers in the United States will readily recall an uncommonly busy hurricane season: Hurricane Irma in Florida mercifully caused less damage than expected, while Harvey brought historic flooding to Texas and Maria left potentially permanent damage in Puerto Rico. Wildfires tore through the country’s northwest in the summer and the Los Angeles area just last week. The news was not limited to the United States. Death tolls and property damage were staggering following a mudslide in Colombia, flooding in Sierra Leone, an earthquake in Mexico and monsoon flooding spanning Bangladesh, India and Nepal. 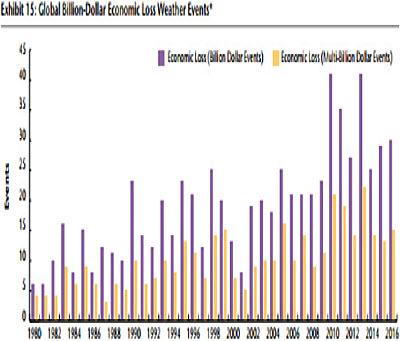 Living through a natural disaster is traumatic. A limited consolation is that these events tend to be fairly localized. While Houston saw immense flooding, the remainder of Texas was spared, offering space for displaced residents to take refuge and for business to continue. In some of these cases, however, the damage has been so severe that we may never see the affected areas recover. As we noted in “Puerto Rico: Left on an Island,” tens of thousands of Puerto Rican residents appear to have permanently relocated to Florida, leaving a lasting impact on both their native homes and their destinations.

Economically, rebuilding a disaster-ravaged area is a form of stimulus. Contractors will find months of work from repairing or replacing damaged homes, businesses and infrastructure. Cars and trucks totaled in flooding will need to be replaced; the purchases of new cars in the wake of hurricane insurance settlements appeared to bolster the American auto industry this year. While the stimulus is helpful in the short term, it is also an illustration of the broken window fallacy: capital spent repairing existing structures cannot be invested in other ways. We hold out hope that 2017 was an anomaly and that future years bring less havoc.

The End of an (Easy) Era

In 2012, Mario Draghi famously said the European Central Bank (ECB) would do “whatever it takes” to save the euro. That battle cry is an apt description of global monetary strategy since 2008. Record low interest rates and massive central bank balance sheet expansion gradually succeeded in restoring economic activity. 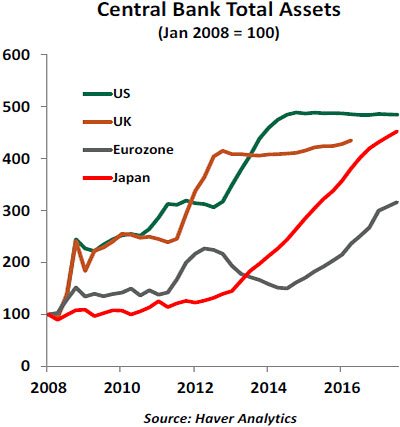 With economic growth strong and even accelerating in some markets, the case for accommodation is fading. We described “The Fading Light of Monetary Policy” last August. The Federal Reserve began reducing its balance sheet in October; this week, it raised interest rates for the fifth time since 2015. In November, the Bank of England raised interest rates for the first time in 10 years. Many expect the ECB’s asset purchases to conclude next year.

Undoing all of this beneficence will take a delicate touch. Quantitative easing programs worked, in part, by encouraging investors to take risks that would help economies to recovery. But the mountains of liquidity unleashed on the financial system may be pushing portfolios to reach for yield, creating the potential for excesses in asset prices. Removing that support too abruptly risks a disorderly correction that could undermine the progress made over the past decade.

Communication with markets will have to be handled deftly. The world’s monetary leaders did well in this area in 2017, but the degree of difficulty is only going to increase. Expansions rarely die of old age; something usually kills them. And that something has often been a monetary policy misstep.

Central banks knew these challenges would eventually arise. But most would agree that these are a nice set of challenges to have, especially given the unpleasant alternatives facing the global economy a decade ago. Monetary policy got the world economy off the ground; it now must seek to keep it well-grounded.

Perhaps the most significant long-term economic trend in recent history has been the rise of China. Since opening to global trade in the 1970s, and especially since joining the World Trade Organization in 2001, China has grown into its current role as the world’s factory.

As the Chinese economy has matured, many economists have been concerned about the potential for a Chinese crash. Any number of factors could bring about this circumstance: currency fluctuation could rapidly destroy Chinese wealth; tariffs could affect Chinese industry; or conventional conflict in North Korea could spill throughout the region. We regard these risks as low, but worth monitoring. 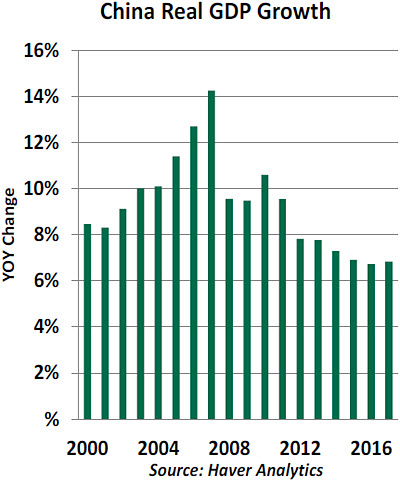 In the most likely case, we expect the growth rate of the Chinese economy to continue to cool at a measured pace, much as it has for the past five years. China’s recent annual growth rates of more than 6% are still well above the 2% to 3% rates observed in developed economies. China’s prospects for continued growth from new manufacturing are approaching a limit; however, its growth has created a prosperous generation that will support sustained economic activity going forward.

Politically, this year brought a landmark change in China’s approach to governance. President Xi Jinping consolidated his power and cemented his position as the country’s leader for the indefinite future. And as we detailed in our piece “China’s New Nationalism,” China has mapped out an expanding global vision.

The ruling Communist Party revised its constitution to explicitly declare Xi’s political philosophies as its platform. In so doing, China offered some amount of assurance of stability to the world. Xi has been politically active his whole life, and his positions in favor of free trade are well established and clearly articulated. He appears to enjoy broad support from his party and citizens. However, any single ruler with such broad power presents key-man risk. A poor decision by Xi could have far-reaching implications, and there is not a clear succession plan in place should Xi ever need to be replaced.

China has emerged as a mature economy and an important global force. How it uses that new platform will bear close watching.

Historians believe that horses were first domesticated more than 4,000 years ago. The partnership formed between man and steed improved transportation, eased harvesting, and generated power for pumps, mills and saws. It’s certainly possible that our early forbears fretted over being made redundant by their equine companions. But more than likely, they welcomed the advance in productivity, which improved their incomes and granted them more leisure time.

Subsequent innovations in production, from steam-powered looms to robotic assembly lines have had a similar impact on economic efficiency. At the turn of the 20th century, nearly half of workers in developed countries labored on farms; automation has since reduced that to less than 5%. Nonetheless, overall employment is at record levels.

Despite the encouragement provided by past patterns, the global debate over technological change has been revived. As we discussed in our July essay “Automation and Anxiety,” the current wave of innovation somehow seems more threatening. Artificial intelligence, which increases the sentience of robotics, could displace whole categories of workers if the futurists are right.

To some, robotics will be welcome compensation for demographic deficits that will confront many countries in the coming generation. To others, the prospect of mass disruption has led to consideration of universal basic income, a program which provides earnings to those who are not working.

Is this time really different? During periods of change, it’s easy to identify industries at risk and hard to identify new ones that might replacement. But those new things have always arisen. Change can be unsettling, but it can’t be stopped. Best to embrace the disruption that will inevitably occur.