This Week in Bitcoin: The IRS Targets Coinbase, Venezuela to Mint Its Own Cryptocurrency Writing about blockchain and bitcoin right now is a little like buying a new computer in the 1990s. The tech was advancing so fast in those days that as soon as you brought the thing home, it was sorely outdated. Similarly, the cryptocurrency world is changing so rapidly at the moment that even before “the ink dries” on one of my posts, some important new development has already surfaced.

Case in point: When Bloomberg ran a particular story this Monday—“Bitcoin Is Now Bigger Than Buffett, Boeing and New Zealand”—bitcoin’s market cap hovered just above $185 billion, making it worth more than the likes of PepsiCo, Boeing and McDonald’s. Well, here it is only four days later, and this chart is already outdated. As of Friday morning, bitcoin’s market cap topped $265 billion, bringing its total value comfortably above Coca-Cola, Toyota and Verizon (and now Bank of America, Walmart, Procter & Gamble, Pfizer, AT&T and Chevron). Next stop is Alphabet, which had a market cap of $288 billion at the end of the third quarter.

Or consider this: In May 2011, an early bitcoin investor named Greg Schoen tweeted his regret that he sold at $0.30, as the currency had then risen to $8.00 apiece. Obviously we’ve seen earth-shattering appreciation since then. As of my writing this, bitcoin has breached the $17,000 level, up nearly 5.6 million percent—yes, you read that right, 5,600,000 percent—from our friend Greg’s exit point in 2011.

Bitcoin, of course, is just the largest fish in the entire universe of cryptocurrencies, which now number somewhere in the vicinity of 1,330, according to CoinMarketCap. If we combine the total market cap of all “altcoins” Friday morning, the amount exceeded $400 billion. That’s larger than the economies of Thailand, Nigeria and Austria. As of my writing this, as many as 15 coins had market caps over $2 billion. Contributing to Coinbase’s attractiveness is the ease with which someone can join. Whereas it can take up to two weeks to create a Schwab account, a Coinbase account can be opened in mere minutes, and as effortlessly as a Tinder account. This is one of the many reasons why both the popular online trading platform and dating service appeal to millennials.

According to Coinbase, as much as $50 billion have been traded on its platform since its inception, but as the number of accounts grows, we’ll likely see this dollar figure surge exponentially. This is the effect of Metcalf’s law, which I featured in an earlier post and discussed with SmallCapPower during the Mines and Money conference in London last month. The Rule of Unintended Consequences

If you recall, President Reagan once said: “Government’s view of the economy could be summed up in a few short phrases: If it moves, tax it. If it keeps moving, regulate it. And if it stops, subsidize it.” Surprising no one, then, Coinbase’s success has raised alarm bells for regulators and other government officials.

Ironically, it’s regulators that have unintentionally created the current environment in which cryptocurrencies now thrive. Back in May, I shared with you the fact that the number of listed companies here in the U.S. fell by more than half between 1996 and 2016. The addition of new financial rules and regulations, from Sarbanes-Oxley to Dodd-Frank, has encouraged more and more startups to avoid going public altogether, which is why we’re seeing an explosion right now in both stock prices—fewer listed companies means greater consolidation of fund flows into select stocks—and nontraditional methods of fundraising, from initial coin offerings (ICOs) to angel investing.

Consider the unintended consequences of Prohibition. Thanks to the 18th Amendment, the U.S. saw a sharp rise in organized crime and the emergence of notorious figures such as Al Capone.

By invoking “Scarface,” I’m not suggesting that all activities involving cryptocurrencies are illegal or malicious. I’m only saying that when rules and regulations become too restrictive, it invites new opportunities in unexpected ways.

And the beat goes on. After a months-long pushback, Coinbase agreed at the end of November to turn over the identities of 14,000 of its users to the Internal Revenue Service (IRS), which asserted that only 800 to 900 taxpayers reported bitcoin earnings between 2013 and 2015.

The tax agency initially requested access to all 13 million of Coinbase’s users, so I would call this an overall win for the exchange

You might presume the IRS’ crackdown on Coinbase would discourage some potential bitcoin investors from participating. I would argue that the IRS incident is actually constructive for bitcoin because there’s very recent precedent of similar setbacks being turned into a windfall for digital currencies.

In mid-September, we saw the price of bitcoin dip sharply after China restricted new ICOs and JPMorgan Chase CEO Jamie Dimon knocked the digital currency as a “fraud,” comparing it to the Dutch tulip bubble in the 17th century. The one-two punch purged the market of weak-stomached investors, resulting in an intraday loss of $711 per coin.

Those who managed to tolerate these swings in the past will likely continue to stay aboard the S.S. Bitcoin—after all, the big banks and IRS’ opposition to digital currencies is precisely why they’re in the game in the first place. Bitcoin enthusiasts value the currency because it’s decentralized, anonymous, finite and cannot be manipulated by “the powers that be,” unlike fiat money.

Put another way, that some world governments, big banks and the IRS seek to quash bitcoin is unequivocal confirmation of its value.

If You Can’t Beat Them, Join Them

That brings us to Venezuela’s recent announcement that it plans to launch its own cryptocurrency, dubbed the “petro,” which will reportedly be backed by oil, gold and diamond reserves.

The revelation comes as the beleaguered South American country’s economy continues to deteriorate since Nicolás Maduro took office in 2013. The country owes around $60 billion to bondholders yet has only $9.6 billion sitting in the bank. An estimated 80 percent of Venezuelans currently live in poverty. Food, medicine and other necessities are dangerously scarce, and inflation right now is among the worst the world has ever seen, comparable to Germany in the 1920s and Zimbabwe in the 80s. 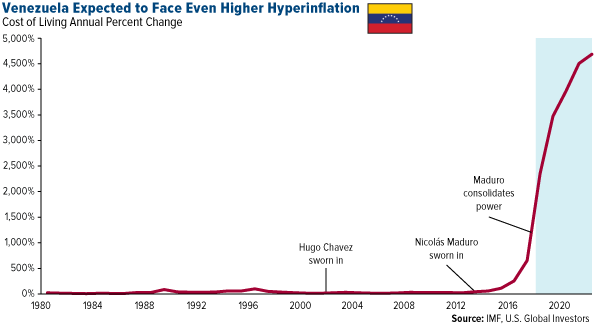 This is inexcusable for such a resource-rich country. Venezuela, which depends on oil for around 95 percent of its export revenues, sits atop the world’s largest known oilfield. Amazingly, though, its output has been declining for several straight months. In September, production fell below 2 million barrels a day, a three-decade low, according to the Organization of Petroleum Exporting Countries (OPEC).

Conditions aren’t likely to improve for the country since Maduro consolidated power in July, effectively making himself absolute dictator and inviting harsh economic sanctions from the U.S. government.

This is precisely what drives Maduro’s interest in establishing a cryptocurrency—to circumvent U.S.-led sanctions. The petro will serve as a “buffer” between transactions, encrypting all incoming and outgoing money to free up the country’s monetary system from controls imposed by the U.S.

As explained by Bloomberg’s Leonid Bershidsky, foreign investors “will be able to lend money to Venezuela and get repaid in cryptocurrency, which Maduro wants them to spend on oil and other Venezuelan commodities” that are tied up by the U.S.

Russia has similar ambitions with its “CryptoRuble,” unveiled in October. Like Venezuela, Russia grapples with steep U.S. and international sanctions following its annexation of Crimea in 2014 and meddling in the 2016 U.S. election. Below is a flowchart— courtesy of Zura Kakushadze, professor of quantitative finance at Free University of Tbilisi, and Jim Kyung-Soo Liew, assistant professor of finance at John Hopkins University—illustrating how the CryptoRuble is designed to allow the Russian government to maintain full control of money flow into and out of the country’s coffers. According to Kakushadze and Kyung-Soo Liew:

With government-issued cryptocurrencies, central banks and sovereign governments will gain even more control, not less, than with the current banking system… This is any government’s dream come true!

To be clear, the way in which Venezuela and Russia plan to use cryptocurrencies is antithetical to their appeal in the eyes of many investors. Unlike bitcoin, Ethereum, Litecoin and other popular digital currencies, the petro and CryptoRuble are centralized—they are conceived and will be controlled exclusively by the Venezuelan and Russian governments.

And unlike bitcoin, they will not be mined, as gold is, but issued by governments, as fiat money is.

The world order as we know it is changing, right before our eyes. This disruptive technology—cryptocurrencies—will indeed end up disrupting the status quo. However, at least in the mid-term, forward-thinking sovereign states that embrace and adapt it to their advantage will end up being the disruptors as opposed to disrupted. The U.S. is the sovereign state with the most to lose in their process, with a clear policy implication: adapt to the changing reality, issue CryptoDollars now, or risk being marginalized.

This assessment dovetails perfectly into a November report from Deutsche Bank strategists Jim Reid and Craig Nicol, who reflect on what they see as the end of traditional fiat money within the coming decades. Because fiat currencies are “inherently unstable and prone to high inflation,” Reid and Nicol write, “We may need to find an alternative.” Among other solutions, the two suggest cryptocurrencies, which “are as much about blockchain as anything else.”

Speaking of blockchain, Australia’s main stock market, the Australian Securities Exchange (ASX), is soon poised to become the first in the world to use blockchain’s superior ledger technology to process transactions, according to Bloomberg. It wouldn’t surprise me if other global stock markets, including the New York Stock Exchange (NYSE), quickly embraced this exciting new technology.

How to Gain Exposure to Bitcoin Without Owning Any

And finally, both the Chicago Board Options Exchange (CBOE) and the Chicago Mercantile Exchange (CME) are setting the table to offer bitcoin futures contracts for the first time ever this month—the CBOE this Sunday, the CME a few days later. This will give investors a new way to participate in bitcoin and, in many skeptics’ minds, help “legitimize” the currency as a serious asset.

There are other ways to participate without actually owning bitcoin. In a recent Bloomberg story, Tom Lee of market research firm Fundstrat lists several companies and funds with exposure to the digital currency. Among his favorites is HIVE Blockchain Technologies, a blockchain infrastructure company involved in the mining of fresh new coins, never before traded. The first company of its kind to sell shares to the public, HIVE began trading on the TSX Venture Exchange on September 18.

I’m sure I’ll have more to say on these topics at a later time. In the meantime, I invite you to watch these two short, informative videos that succinctly explain blockchain and bitcoin in plain terms. Enjoy!

What Is Blockchain?
What Is Bitcoin? This week spot gold closed at $1,248.50 down $32.00 per ounce, or negative 2.50 percent. Gold stocks, as measured by the NYSE Arca Gold Miners Index, ended the week lower by negative 3.67 percent. Junior-tiered stocks outperformed seniors for the week, as the S&P/TSX Venture Index came in off just 0.50 percent. The U.S. Trade-Weighted Dollar surged 1.10 percent this week.