Five years ago, my father’s accounting job was eliminated. Though the change was abrupt, he wasn’t overly disappointed. The layoff happened just two weeks before his 68th birthday, when he would qualify to receive maximum payouts from Social Security. He had saved well for retirement, so he could afford to leave the workforce.

Then, after four months of gardening and photography, he jumped at the opportunity to get out of the house and take a part-time job. Retirement just wasn’t for him. As it turns out, he is not alone. Older Americans are staying in the workforce in increasing numbers. (For the purposes of comparison, we rely on data that defines ages 65 and over as “older.” We present this only as a guidance of when retirement used to be the norm, and we mean no offense to anyone who has grown into this demographic.)

The trend is global: most countries are experiencing a relative increase in workforce participation among older workers. The majority of countries tracked by the Organisation for Economic Co-operation and Development (OECD) show rising workforce participation among residents over age 65. The United States is relatively high at 19.3%, but this is still lower than other developed economies, including Japan (22.8%), Mexico (27.3%) and Iceland (40.6%).

Why has this trend taken off, in so many geographically and economically dispersed nations? Reasons for this phenomenon abound, and range from uplifting to cautionary.


It’s not all cheerful news, however. Many older workers are in their jobs by necessity. Some did not save sufficiently for retirement, while others saw their savings depleted during the slow recovery from the 2008 recession. Social Security payments alone are often insufficient to pay for a person’s necessities. Recent surveys have shown over a third of Americans have saved nothing (beyond Social Security) for their retirements.

This is not a new phenomenon, but rather the extension of a long-running trend. For decades, we have seen a gradual decline in personal savings – the share of our gross income that we do not consume or spend on taxes. This is the money that is available for long-term investing. The personal savings rate in the United States averaged 11.8% in the 1970s, 9.3% in the 1980s, and 6.7% in the 1990s. Personal savings rates in the United States reached a low of 1.9% in July 2005 and climbed somewhat as households de-leveraged in the most recent recovery. However, the savings rate remains low by historical standards.

To be fair, the savings rate does not reflect price appreciation in investments or retirement accounts, which for many has been substantial. It commingles retirees, who would be expected to have negative savings, with current savers; as more Baby Boomers retire, this will weigh on the net savings rate, but does not reflect economic hardship.

But for many families, the low savings rate is telling the whole story. The Federal Reserve’s Survey of Consumer Finances found that only 40% of households with below-median income had a retirement savings account of any kind, in contrast to 95% of households in the top decile.

In Transamerica’s survey of U.S. consumer retirement plans, 28% of respondents intended to continue working, either by pursuing a new career, working in their field in a different capacity or starting a new business. When these respondents were asked why they planned to continue working, most said they were doing so for the money or the benefits. These figures suggest that the idea of a conventional, leisurely retirement is changing.

There is hope for the future. The Millennial generation appears to have benefitted from years of advice about the importance of retirement savings. Younger workers were the least financially affected by the Great Recession, in that they had very little saved when the recession began in 2007. However, they witnessed its impact. They have seen older generations struggle to retire. According to the Transamerica Retirement Survey, Millennials started saving at a much younger average age of 22 years old, as opposed to 28 for Generation X and 35 for Baby Boomers.

Retirement savings present a psychological challenge. The cost of saving is felt immediately through reduced take-home pay and a smaller bank account, while the benefit is deferred, by design, for a very long time. Workers in their prime earning years may be tempted to postpone savings. Employers have begun using behavioral finance tactics to encourage savings plan participation, including enrolling employees by default and increasing contribution rates annually unless employees opt out. Small measures like these can go a long way toward helping employees building a nest egg.

Continued labor force participation has other benefits. Older workers who continue earning wages may postpone their Social Security withdrawals and Medicare participation, reducing the burden of these systems on all taxpayers. Those who continue working will remain active participants in the broader economy. As my father can attest, entering retirement may not happen by choice – but with proper planning, we can choose to “retire” in a way that suits us best.

The e-mail announced cheerfully: it’s time to enroll! The phrase evoked the beginning of school days, with new supplies, new outfits and (at least initially) no bad grades on the report card.

Alas, I’m too old to be going back to school. Instead, the message referred to annual enrollment in our corporate benefits program, a process that can make astrophysics seem easy by comparison. The good news is that there is a substantial amount of information available to help workers make decisions on health care coverage, but the bad news is that it is terribly difficult to understand it all. And there is a lot of economics involved, which is a scary prospect.

Most corporate providers will offer their employees a menu of alternatives for health care coverage. They typically differ by the range of coverage offered, the range of providers that can be used, and the split of payments between patients and insurance. On this latter front, there are a couple of key variables to consider, each of which involves important tradeoffs.

1. Co-Payments. Asking patients to pay a modest amount for an office visit might lead them to think a bit more carefully about whether the visit is essential, which can help reduce the cost of unnecessary appointments. But if the co-payment is too high, a patient might defer a checkup or a treatment, raising the risk of health problems (and health expenses) later on.

2. Deductibles. High-deductible plans have become increasingly popular. They provide coverage for more significant situations, but require patients to pay out-of-pocket for more routine things. Again in this case, people might choose to save money and defer medical maintenance. Low-deductible plans initiate coverage earlier, and thereby shift more of the risk for high medical expenses to the carrier.

High deductible plans are often paired with Health Savings Accounts (HSAs), which can be used to cover out-of-pocket medical expenses. HSAs can be funded with pre-tax dollars, and employers will sometimes kick in money to help endow them.

Of course, plans that require less of patients when they get sick carry higher premiums. If you had perfect knowledge of your family’s care needs for the coming year (and good spreadsheet skills), you could simulate how much you would pay under each of the alternatives, and then select one that is the cheapest overall. But no one can predict how their health might evolve with a high level of precision. Accidents happen, and benign conditions can unexpectedly become chronic. The consequences of decisions taken today (in the arenas of wellness and insurance coverage) could take many years to fully manifest, adding to the intricacy of the exercise. 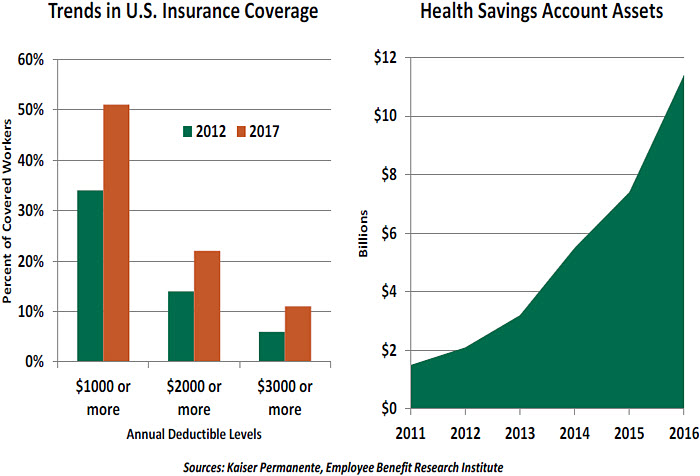 Behavioral economics plays a big role in the process. As we discussed earlier this year, people have a tendency to turn complicated problems into simple ones they think they can solve, with potentially dangerous consequences. Or they avoid the problem altogether; quite a few people simply roll over the coverage they had the year prior, even if their personal circumstances have changed or if a new alternative has been added to the menu.

Finally, people seem to dislike paying deductibles, even if doing so lowers their overall costs. This may be a reflection of risk aversion; we don’t know if we’ll get sick, but if we do, we don’t want to add the insult of having to pay for the privilege. Premiums are collected through payroll deduction, which is relatively painless; deductibles and copayments come more directly out of our pockets.

There are websites that can help you through the analysis, but the cold calculus they use fails to account for our innate irrationalities. Just thinking about enrollment is giving me a migraine … I wonder if my insurance will cover it?

I’ve been getting a lot of questions about the yield curve lately. Specifically, clients ask whether the diminishing spread between long-term rates and short-term rates is warning that a recession is coming. A recession will certainly come again someday, but the yield curve may not be the best leading indicator for that event.

Yield curves normally have an upward slope, for two reasons. First, during good economic times, inflation is likely to be rising and central banks are more likely to be raising interest rates. And second, investors require compensation (called a term premium) for extending their durations, since they risk seeing short-term rates rise during the term of their investments.

When a yield curve is flat (or on those rare occasions when it inverts), it could reflect an expectation of lower inflation and lower interest rates in the future, which would result from slower economic times. History (below) shows that flat yield curves have been observed around the last several U.S. recession periods.

But the current the current yield curve is not unusually flat, and the history shows that the yield curve can be flat for a long time without a recession occurring (as was the case in the 1990s). Further, the shape of the yield curve is influenced by patterns of government borrowing, which currently skews heavily to the short-term. This week, Treasury Secretary Steven Mnuchin announced a further shift toward short-term debt issuance.

Perhaps the biggest damage to the yield curve’s utility as a forecasting tool has been the massive participation of foreign investors in long-term Treasury auctions. As we discussed earlier this year, global pools of capital have grown substantially over the last 20 years; the U.S. Treasury markets offer strong liquidity, a relatively strong currency and high credit quality. Given their wish for portfolio diversification, some international investors may not be basing their choices exclusively on the outlook for the U.S. economy.

In sum, the yield curve is certainly worth watching. But its current position is no cause for alarm.