by Carl R. Tannenbaum, Ryan James Boyle of Northern Trust, 11/3/17
SUMMARY
The White House has settled on Jerome Powell as its choice to lead the U.S. Federal Reserve. The nomination should earn support from the U.S. Senate, which confirmed Mr. Powell as a governor of the Federal Reserve System in 2012.

During his five years at the Fed, Powell hasn’t expressed any strong views on monetary policy. He has never dissented from an interest rate decision, and his public remarks on the economy and inflation have not staked out fresh ground. On this basis, we are not expecting any changes to the trajectory of U.S. interest rates upon the transition next February.

The Fed’s balance sheet reduction program, which commenced last month, is designed to proceed without much intervention. Barring something unforeseen, it is unlikely that this carefully laid plan will be modified.

Powell will become the first Fed chair without a PhD in economics in three decades. We do not see this as a liability; there are plenty of classically trained economists on the Fed staff, and throughout the Federal Reserve System. Further, financial conditions have become an increasingly prominent consideration for central banks since the 2008 financial crisis, and Powell’s experience with markets will continue to be of value to the Fed’s discussions.

Powell is close with Randal Quarles, who was recently confirmed as the Fed’s vice chairman for supervision. Together, the two will likely seek to right-size supervision of the financial system. Our view is that some post-crisis regulation is in need of re-evaluation. Portions of the Dodd-Frank Act (such as the Volcker Rule, which limits the proprietary trading done by banks) have been difficult to implement and have had little impact on financial stability. Other strictures, like higher capital standards for banks, have been more effective and should be sustained.

Should Janet Yellen opt to leave the Fed Board when her term as chair concludes, there will be four openings to fill. The new appointments will certainly contribute to the institution’s monetary philosophy. But it is worth noting that the Fed’s constitution is filled with checks and balances that limit the potential for radical change. The staff is influential, as are the district presidents. And if the Fed loses control of inflation, the bond markets will certainly express their displeasure.

Powell will take the helm amid an odd combination of circumstances: strong growth, low employment and quiet inflation. He may be called on to react to significant fiscal stimulus, if tax reductions pass the Congress. And he may have to confront risks to financial stability as asset prices continue upwards (see following article).

We’ll publish more on the leadership transition as the handoff approaches.

By middle age, most jocks have accumulated a few injuries. Their affected joints often get sore when the weather changes; one senses the chill coming before it hits. The onset of autumn is particularly uncomfortable.

During recent travels, several people I’ve spoken to have confessed to feeling uncomfortable. They aren’t aging athletes, though; their unease has been caused by the terrific performance of financial markets around the world. Even though this development has been enriching, it has left a lingering nervousness in many corners. The prices of everything are rising in unison (as described in a story from The Economist, depicted below), with little apparent concession to potential risks.

Similar conditions prevailed ten years ago, just before the financial crisis. That memory is leading present-day policy makers and portfolio managers to contemplate defensive measures. Unfortunately, it isn’t clear what steps should be taken, or how effective they will be. 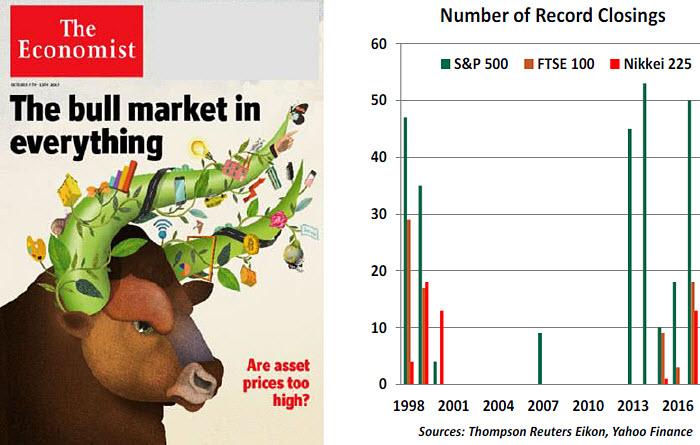 At the outset, it is important to note that neither my partners nor those I’ve spoken to are anticipating another financial crisis. Fundamentals surrounding most asset prices remain constructive: global economic growth is strong and well-coordinated, central banks remain
accommodative and banks are far healthier than they were in 2007. A treatise from our
investment strategists to this effect can be found here.

That said, markets have had an incredible run this year: equities have set a series of records, bond prices remain strong, credit spreads are narrow and real estate values continue to escalate. After such a strong performance, it is natural to ask whether such a trajectory can be sustained.

Bull markets rarely expire of old age; something usually hastens their demise. There is a long list of potential risks that could shake the market’s foundations:

Advancing trade friction would hinder countries and companies that are dependent on international exchanges. If global supply chains are broken, or if global commerce is curtailed, the effects could threaten corporate performance. It would also lock economies into much shallower growth paths, and it could threaten the sustainability of debt in some parts of the world.


Despite all of these threats, market volatility has remained muted. And it has been quite a long time since equity markets experienced the corrections that occur normally during the course of bull markets. On the back of this overriding calm, credit agents have been getting much more aggressive. Leverage is beginning to build once again in many parts of the world, and exotic forms of financing are reappearing for the first time in a decade. 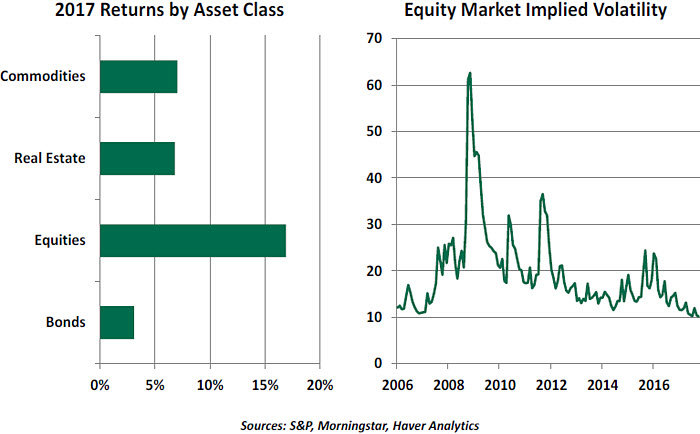 Central banks are taking careful notice of all of this. Their aggressive strategies in the post-crisis era have added trillions of liquidity to markets; these funds are all looking for returns. Quantitative easing, in particular, sought to repress interest rates and promote portfolio rebalancing towards risk assets. Perhaps these efforts have been too successful.

In the years since the 2008 crisis, many central banks set up departments to monitor financial stability. The intelligence produced by these units complements more traditional macroeconomic analysis and informs the course of policy. It isn’t clear, though, that the expanded surveillance is having much influence. It isn’t easy to identify
when a market trips from fully valued to overvalued, and central banks don’t have a
great track record of success on this front.

Should concerns escalate, it might be difficult for monetary authorities to act on them. There is a reluctance to use interest rates to contain asset prices; many investors are not using leverage, so higher rates will have limited impact on their appetites. Raising the cost of borrowing may also suppress more desirable kinds of economic activity.

As an alternative, former Fed Chairman Ben Bernanke promoted the use of “macroprudential” tools (which include limits on leverage and regulatory warnings) to address market imbalances. But these tactics are untested, and their application would certainly raise objections from those who would like to enjoy the party just a little bit longer.

For private portfolio managers, it can be difficult to move away from being fully invested. Concerns about asset prices may never come to fruition, or may take some time to manifest. One can be wrong for a long time before being proven right; missing another leg of strong returns can lead clients to look elsewhere for guidance. And so we wait, hoping the soreness in our sensibilities isn’t foreshadowing a change in market climate.

For Richer or Poorer

In the early stages of this recovery cycle, there was widespread concern that all economic gains were going to higher earners with more qualifications. People with less experience and fewer skills were unable to find work, leading to persistently high unemployment and sluggish wage growth.

As the recovery has continued, though, this trend has diminished somewhat. This is manifest in the U.S. Census Bureau’s recently-published report, Income, Poverty and Health Insurance Coverage in the United States: 2016.

The report paints a positive picture for the U.S. economy. The median household income of $59,039 is a new record high. Adjusted for inflation, the 2016 reading exceeds the previous record set in 1999, at the peak of a historically strong growth cycle. This is encouraging because it reflects median income, the amount earned by a household exactly at the middle of the income distribution. Any windfalls experienced solely by high earners will not skew the median.

The report pays close attention to income distributions, providing detailed statistics on the subset of the U.S. population in poverty. The definition of poverty varies by household size, currently an annual income of $12,228 for an individual or $24,563 for a family of four. The poverty rate now stands at 12.7%, a continued improvement from the peak of 15% observed in 2011 and 2012.

This view of income by distribution reveals that the recovery has not benefitted all earners equally. Incomes have risen, but at differing rates. In the line chart below, we see that the median household income for the top 20% of earners has grown at a compound annual rate of 2.5% in the past five years compared to a more modest 2.1% growth at the median and only 1.5% for the lowest quintile. Low earners are obviously starting from a lower base of earnings, and their lower growth rate makes it harder to rise to a higher economic stratum. This disparity will compound over time, as people living paycheck-to-paycheck today will have little left to save for retirement.

When people feel they have fallen into a permanent underclass, unable to achieve the lifestyle they envision, they can become disillusioned. Voters’ perception of a lack of economic opportunity drove much of the populist sentiment that played out in last year’s elections.

To respond, measures that promote economic mobility should be given greater consideration. These can take many forms, including support and funding for
re-training workers, relocation allowances to help households move for work and enhancements to the Earned Income Tax Credit. Addiction counseling can be a
lifesaver for those who have compounded their economic challenges with narcotic abuse, as opioid consumption has been more prevalent in more economically-challenged areas.

At the low end of the spectrum, we should note a limitation of the median income measure: it is based only on gross monetary income. It does not factor in taxpayer subsidies, such as the Earned Income Tax Credit, or social support measures like the Supplemental Nutrition Assistance Program or rent subsidies. And while these support programs aim to prevent our lowest earners from becoming destitute, they do not encourage mobility.

Are only the rich getting richer? The Census report includes an updated Gini coefficient, a measure of income dispersion across a population. The measure ranges from 0 to 1, in which a rating of 0 would indicate that income is evenly distributed across all people, and 1 would indicate that all income is going to a single person. The United States now rates 0.481 on the Gini scale, slightly down from its peak reading of 0.482 in 2013. The United States’ lowest recorded Gini coefficient in this data series was 0.386, set in 1968; since then, the measure has gradually increased. As long as greater income gains continue to accrue to higher earners, American income inequality will only increase.

While the overall report contained good news for all workers, there is continued opportunity for further improvement. Any well-functioning economy will always have some income dispersion. But as the expansion continues, we should seek ways to ensure that the bounty is widely distributed.