With our nest now empty, my wife and I are aggressively decluttering. We found a variety of things in the far reaches of our children’s closets: old stuffed toys reminiscent of gentler times, and empty liquor bottles from…less gentle times. Both went into the bin, no questions asked.

We’re now turning our attention to cleaning out the garage, which could easily occupy the next several months. We might need a dumpster to cart away the 25-year accumulation of junk. But I am reluctant to part with my tools, even though they have received scant use over the past decade. I used to enjoy working with my hands, and helped to build the deck and shed that adorn the perimeter of our house.

During my apprenticeship, I was taught the cardinal rule of carpentry: measure twice, cut once. That is not the tactic currently being taken by the U.S. Congress as it tries to rush tax reform through before the end of the year. The design of the program is still not clear, and passage is by no means guaranteed. But miscalculation during the process could introduce global costs.

The new cast at the White House arrived with strong opinions about the U.S. tax system. In their view, the code was too complicated and it was hindering economic activity. As we discussed recently, the corporate tax regime has come under particularly intense criticism for placing American firms at a competitive disadvantage. 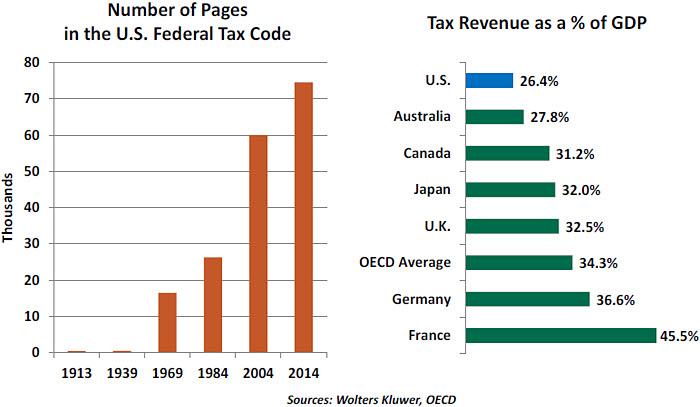 It isn’t universally clear that tax cuts are needed. As shown in the chart above, the United States is far from a high-tax jurisdiction. And while reducing taxes should increase economic activity, few economists think that the cuts will generate enough incremental growth to keep the budget deficit from expanding. U.S. government debt has tripled since 2006, and deficit hawks have been loath to add any further to the total.

But the U.S. Congress has agreed on a budget resolution that would allow an additional $1.5 trillion of deficits over the coming decade. (Apparently, the desire to deliver a tax cut trumped calls for fiscal responsibility.) The measure was a reconciliation bill, which allows it to proceed with a simple majority. This parliamentary procedure will make it
somewhat easier for Republicans to pass budget measures without any Democratic support.

With added room to maneuver, legislators have increased latitude to consider tax reductions. But a couple of significant challenges remain.

The first is that the cuts may increase the U.S. Federal deficit by even more than the expanded allowance. The verdict on this question will be determined through the scoring process, covered in our recent piece entitled “Fuzzy Math on Fiscal Policy.” To evaluate how different policy formulations will affect the deficit, forecasters start with a static view, which only considers the direct impact on the bottom line. From this perspective, tax cuts never fare very well.

But the hope of those who support lower taxes is that such a policy would generate increased economic growth, thereby producing additional revenue. In an attempt to capture these effects, dynamic scoring can be used. The case for a more interactive approach can be found here; the measure passed this week allows this technique.

Performing dynamic scoring is extraordinarily difficult, and subject to a number of assumptions. Disagreements on the end result of tax reform are already emerging, as shown in the chart below. 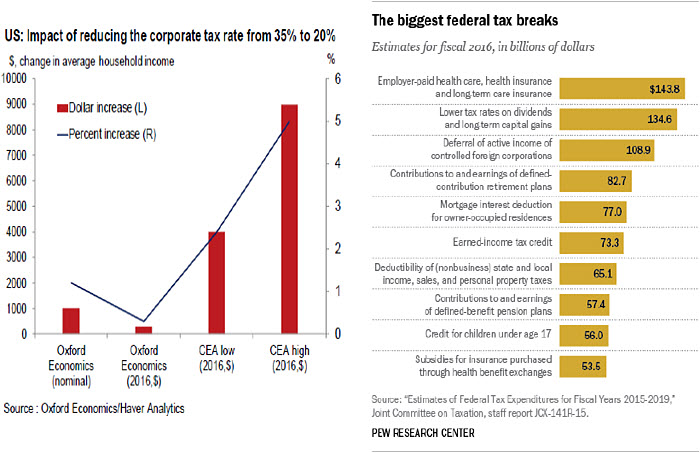 The second challenge is that limiting the cost of lower tax rates requires “broadening the base.” This means curtailing or eliminating some preferences that are near and dear to the hearts of taxpayers and the legislators who serve them. Among the proposals floated this week was limiting the tax exemption for contributions to defined contribution plans. (This seems ill-timed, given America’s yawning deficit in retirement preparedness.) Dropping the deduction for local income and property taxes would hurt those in high-tax states.

Eliminating favorable tax treatments could create sizeable allocative effects, favoring some sectors while leaving others disadvantaged. This could threaten the Republican unity that will be required to pass reform. It is also not clear that there is close consensus between the Congress and the White House on the ideal outline, which adds to the degree of difficulty. The horse trading currently going on in Washington makes the Keenland thoroughbred auctions look like a country swap meet.

The outcome of the process is being closely followed in a number of world capitals. On arrival in Melbourne this week, I was surprised to see calls from the Australian Treasurer to lower corporate tax rates pre-emptively to sustain competitiveness. The Australian economy, which has not endured a recession in 26 years, does not appear to require such
urgent stimulus. And actions of this kind could start a fiscal race to the bottom that would
ultimately benefit no one.

We continue to think that the political and fiscal calculus makes tax reform unlikely, but the odds of it happening have increased somewhat. Lacking any political victories this year, Republicans are very anxious for a signature legislative success. But in their haste to deliver something to their supporters, they may not be properly measuring the impact of the program. An ill-designed initiative could turn out to be the unkindest cut of all.

Editor’s Note: We are delighted to introduce Ryan Boyle, who joined us as a senior economist this week. We’re looking forward to sharing his insights; his reflections on how tax reform might affect the housing industry follow.

Ask any homeowner why they purchased their house, and you can expect to hear a variety of answers: a desirable neighborhood, space to raise a family or proximity to relatives. My home provided the opportunity for adventure, in the form of a series of renovations.

Only the most pragmatic among us will say we own a home for tax purposes. However, the tax benefit of homeownership can be substantial. Proposed U.S. tax reforms stand to affect this benefit, which has raised consternation among industry groups. But the impact is likely to be much more modest than some fear.

A key feature of Republicans’ recent tax reform proposals is to roughly double the standard deduction. In the White House framework, the deduction would increase from $6,350 to $12,000 for an individual, and from $12,700 to $24,000 for a couple filing jointly. This is a substantial increase that would serve to tip the scales for more homeowners to stop itemizing and start using the standard deduction. Though mortgage interest would remain deductible, only taxpayers with very sizeable mortgage interest payments would continue to benefit from deducting mortgage interest. 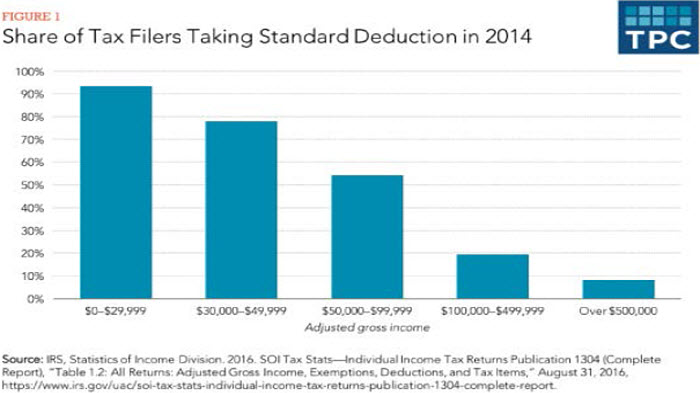 If this reform were to pass, the point of greatest uncertainty is how housing prices might respond. While taxes are just one factor among many in the decision to purchase a home, a change to the tax code may constrain buyers’ willingness to take on a higher mortgage payment, forcing sellers to lower their asking prices. We do not expect to see an immediate shift in home values as a result of this change, but it may impair future growth in housing price appreciation.

Predictably, many groups in the housing industry oppose any change to interest deductibility. Realtors and homebuilders stand against any action that could deter home-buying, depress home values or add uncertainty to a market that has been slow to recover from the Great Recession. The National Association of Realtors (NAR) states in no uncertain terms: “NAR opposes any changes that would limit or undermine current law ….
[D]ecreasing the value of the [mortgage interest deduction], even for just a limited group,
would hurt all homeowners because of the chilling effect any reduction would cause in the market.”

In a surprising change of stance, the National Association of Home Builders (NAHB) has recently signaled its willingness to compromise on its long-standing opposition to tax code changes, if Congress can agree on other incentives to promote homeowners’ interests. This is a different direction from the NAHB’s past position, but it hardly suggests that the industry feels it can do without fiscal preferences.

It is important to note that all tax policy changes, from removing the mortgage interest deduction to changing tax brackets, are only ideas at this point. We will revisit this topic as more concrete details take shape. And I will revisit the details of the concrete repair I recently attempted on my front sidewalk, which serves as a daily reminder that I’m a better economist than a handyman.

To counteract the collective aging of the population, the three arrows program (also known as “Abenomics”) was initiated in 2013. The combination of monetary, fiscal and structural reform has produced a solid economic expansion and restored a modest level of inflation. Japanese equities are at a 20-year high, and unemployment is at a 23-year low. Those kinds of numbers are great for incumbents.

For all intents and purposes, Japan has been pursuing a “helicopter money” strategy for the past several years. Fiscal expansion has been financed by the Bank of Japan through a monetary strategy of targeting low long-term interest rates. The Bank of Japan now owns about 45% of Japanese government bonds outstanding, essentially monetizing the national debt.

This closely coordinated strategy might not work in countries where the independence of central banks is more sacrosanct and where monetization is more likely to beget hyperinflation. But Japan is different in both regards. More government spending to stimulate the economy is certainly in the offing, especially if Japan moves to expand its military.

The third arrow of the program – structural reform – has had mixed success. Labor force participation among women has increased, helping sustain the labor pool. But other aspects of structural reform have moved more slowly. In particular, efforts to engineer higher real wage increases (and, by consequence, real consumption) have not been as successful. Perhaps with a strengthened mandate, Mr. Abe will take more forceful measures in this area.

Abe’s strength and continuity will also prove to be a useful counterbalance to the assertiveness of his Chinese counterpart, Xi Jinping. A good dynamic between Tokyo and Beijing will be supportive of regional prosperity and geopolitical stability.