I met Aretha Franklin once. I am a big fan of hers; she has an amazing voice, and her songs contain powerful messages. (If you want a little inspiration, you’ll find it here.) I’m not normally at a loss for words, but all I could muster was “Great music…thanks.” What an embarrassing moment.


Aretha was a delegate to the 1996 Democratic Party convention in Chicago, along with more than 4,000 others. The scenes around town, both in the convention hall and in hotel lobbies, were almost circus-like. Party gatherings elsewhere in the world can also tend toward the theatric: witness the recently-concluded Tory Party conference in the United Kingdom, which included an ill-timed coughing fit by the prime minister and an intruder delivering her a termination form.

By contrast, this week’s Congress of the Communist Party of the People’s Republic of China was a rigidly ordered affair. There were no placards, no protests and no open debate. The proceedings were carefully choreographed and the outcomes pre-ordained. But what the event lacked in entertainment value will be more than offset by the impact of the policies that emerge from the gathering.

This 19th Congress, the first in five years, came at an interesting juncture. Economic growth in China is lower than it was at the beginning of the decade, but remains at a high level. On the back of this performance, President Xi Xinping has become the most powerful Chinese leader in the last forty years. (He was recently described by The Economist as “The World’s Most Powerful Man.”) Xi is expected to emerge from the party Congress with even greater power. The question is how he will use it. 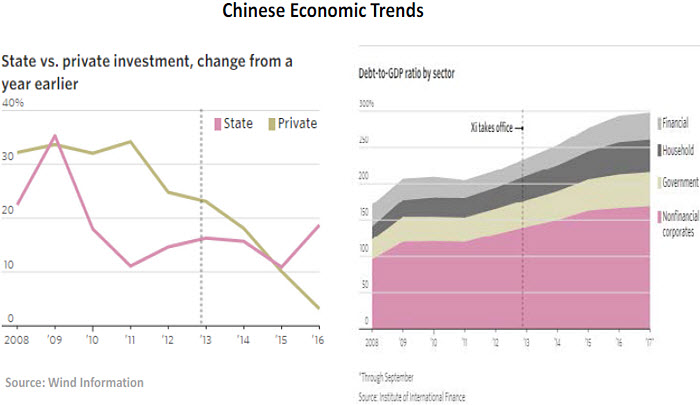 Forty years ago, Chinese Premier Deng Xiaoping began allowing more free enterprise. He called his program “socialism with Chinese characteristics.” Market forces were invited in but carefully controlled; that has been the operating model ever since. During his opening address, President Xi heralded “a new era for socialism with Chinese characteristics,” which suggests a continuation of that lineage.

China has been very protective of its economy in general, and of its domestic firms in particular. It has been especially anxious to foster the growth of local industries, shielding them from full exposure to international commerce until they were ready to compete. To provide a stable context for development, China has carefully controlled its currencies and capital account to limit the kind of volatility that was so damaging to its neighbors in the late 1990s.

In the last generation, China has lifted millions of its citizens out of poverty, and a thriving middle class has accumulated significant wealth. China’s economic influence around the world has grown immensely. As other world powers have shifted inward, China has tried to position itself as the world’s foremost defender of free trade. President Xi’s speech at the World Economic Forum in Davos last January laid claim to the high ground on globalization.

Domestically, Xi has gradually consolidated Beijing’s influence over the national economy. Provinces and their leaders have been called to account for their actions; some officials who have resisted have been singled out by the country’s anticorruption campaign. A series of recent steps have made it much more difficult for Chinese citizens to move capital outside of the country.

As well as China has performed, it faces some significant challenges in the decade ahead. Among them:

Many of China’s biggest manufacturers are state-owned and/or influenced. There seems to be substantial overcapacity in some areas, bringing prices to a level that renders some firms unprofitable. Yet the government has left some companies to limp along as “zombies.” It will be interesting to see if more aggressive steps will be taken to close these firms down. 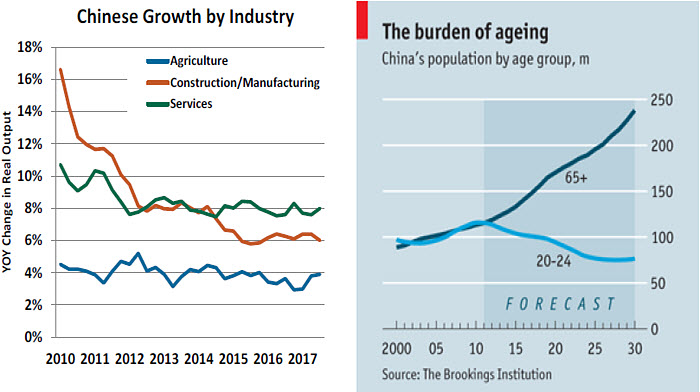 In anticipation of this evolution, China is investing heavily in robotics in an attempt to offset demographic decline with enhanced productivity. The hope is that returns from investments in capital will begin appearing just as the country’s retirement boom gets underway. 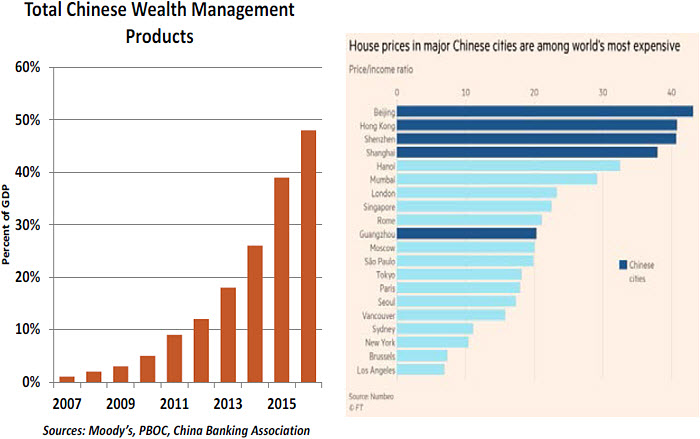 Xi’s platform at this year’s Congress calls for “two pillars” (monetary policy and macroprudential regulation) to shore up the financial system. This is similar to the approach being taken in western economies, but Chinese efforts will have to gain traction during a period of excess. Removing just a little air from a bubble, without deflating household finances or banks, is a delicate task. But Xi seems to be willing to trade a lower rate of economic growth for enhanced economic stability.

China’s commitment to further economic reform remains a mystery. Xi reiterated this week that market forces should play a “decisive” role in the economy, but added that the state sector should be “stronger, better and bigger.” To that end, Beijing recommended this month that the government acquire stakes in some of China’s leading technology companies.

To the Chinese, this is an extension of the strategic nurturing initiated in the 1970s. But the government’s sustained support of firms that are already world-class disadvantages foreign firms seeking to gain a foothold in China. When added to grievances over intellectual property rights, currency manipulation and market access, the state’s involvement in private industry has raised the ire of China’s trading partners.

The United States is foremost among them, but is not alone. The new nationalism that has risen in many countries during the past eighteen months has legislatures around the world looking at trade with a more jaundiced eye. Should there be a retreat from global commerce, everyone will lose; but nobody has more to lose than the Chinese.

Sino-American trade tensions are not new, and past frictions have been successfully ameliorated. The stakes in negotiations are not only economic, but strategic; collaboration will be needed to check North Korea, and to ensure the integrity of shipping lanes in Asian waters. These elements complicate bilateral discussions significantly.

There are those in the United States who wouldn’t be disappointed to see China fall back to earth, thereby vindicating the supremacy of the American system. But one must recognize that no single economic approach will be suitable in all cases. And a Chinese hard landing would surely intitiate global financial consequences.

The key to success may come from Aretha Franklin: R-E-S-P-E-C-T. China has earned it, and there can be no détente without it.

This week, the White House concluded its interviews of candidates to lead the Federal Reserve. A nomination is expected before the end of the month. The group of candidates is an interesting array of academics and practitioners, and includes both hawks who favor higher interest rates and doves who prefer to sustain monetary accommodation.

Kevin Warsh and John Taylor have publicly questioned the Fed’s continued embrace of low interest rates. Warsh, who served on the Board of Governors during the financial crisis, also criticized the Fed’s communication and conduct in an editorial posted last year. He is seen as the candidate most likely to press for substantial changes in the way the Fed operates.

Taylor, a Stanford professor, is best known for the “Taylor Rule,” which proposes a formulaic approach to setting interest rates. We discussed monetary policy rules here last summer. In reality, the use of the Taylor Rule still requires a lot of discretion; some of the inputs required are subjectively determined and can have a substantial impact on the recommended trajectory of interest rates. As an example, the chart below shows the recommended path of interest rates under two plausible assumptions for what the “neutral” real interest rate might be.

Janet Yellen is the incumbent. Only one Fed chair since World War II has served a single term, and the last two leaders were reappointed by a president of the opposite party. So history, at least, would suggest she has a reasonable chance at reappointment. With three seats open on the Board of Governors (including the role of Vice Chairman for monetary policy), Yellen’s experience would promote continuity.

Yellen has been characterized as a dovish voice on the FOMC, and interest rates have risen only slowly under her tenure. But during her first stint on the Fed’s Board of Governors in the mid-1990s, Yellen supported a series of pre-emptive interest rate increases with her votes and her remarks. Her orientation is much more balanced than some in the media might suspect.

As an incumbent, Janet Yellen has assembled a record hailed by some and criticized by others. Post-crisis economic performance has not been the most robust, but given the secular headwinds faced by the U.S. economy (deleveraging and demographics among them), the eight-year-old expansion should be considered a good outcome. Yellen was part of a team that
recommended the current suite of Fed communications, which has received mixed reviews.

On the regulatory side, Yellen has faithfully followed through on post-crisis legislation that was passed by the Congress. (It merits mention that the Fed did not propose or enact the Dodd-Frank Act, so holding the Fed accountable for any undesirable outcomes seems misplaced.) Nonetheless, as the banking industry has returned to health, the call for deregulation has intensified. Many see Yellen as a defender of the current regime, even though she has publicly volunteered areas where oversight can be safely reduced.

Jerome (Jay) Powell may represent a compromise amid the others. A former investment banker, Powell has served on the Fed Board for the past five years. He has never dissented from an interest rate decision, so monetary policy would likely remain on course were he to be selected. But his background in industry would position him well to take a fresh look at the level of financial oversight.

Gary Cohn, the head of the president’s National Economic Council, has also been mentioned as a possibility. But his chances seem to have diminished, and his voice within the White House could be difficult to replace.

The Fed Chair is a powerful figure, but not a dictator. The structure of the Fed and the strength of the staff provide important checks on the aspirations of leadership. Nonetheless, the upcoming transition will set the tone for U.S. monetary policy during what promises to be an eventful interval ahead.