All cultures have the challenge of balancing the past and the present. But nowhere is the contrast between the two more apparent than in the Middle East. One is reminded of that five times daily, as a traditional call to prayer sounds across avenues lined with modern buildings and filled with pedestrians busy with their smart phones.

At present, the region is trying to balance historical sources of economic success with advancement into new avenues of growth. Blessed with immense reserves of high-quality crude oil, key producers are realizing that overreliance on petro-revenue may be dangerous. Amid new global dynamics, countries around the Gulf are seeking a new business mix.

In the years after World War II, the industrialized world became deeply dependent on petroleum. Factories were at peak production, and among their more prominent outputs were motor vehicles. People were driving more, and overland shipping advanced. Substantial investments in highways facilitated all of this; heavy equipment also used lots of gasoline.

Progress on all of these fronts was fueled by cheap oil. Prices per barrel remained within a range of $20 to $25 from the mid-1950s to the early 1970s, thanks to the control exerted by the world’s largest oil companies (known as the “Seven Sisters”). Governments in the Middle East retained close colonial-era alignments with western nations. 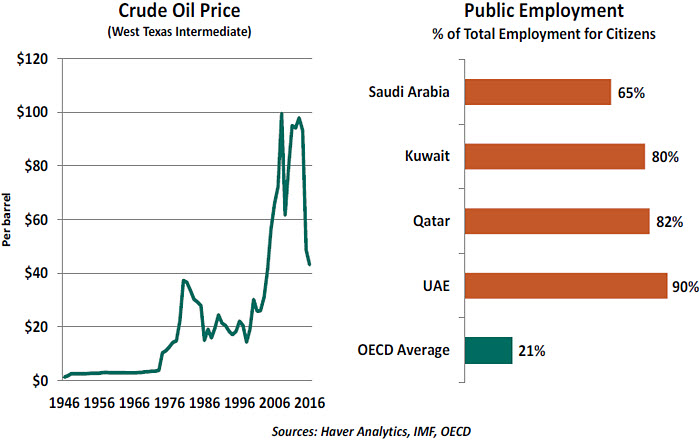 That all began to change 45 years ago, as kingdoms and emirates in the region established an increasing level of independence. The Organization of Petroleum Exporting Countries (OPEC) was formed in 1960, but rose to prominence in the following decade. Supply restrictions and outright embargos led oil prices to double in 1973, and double again in 1979. The dual shocks created immense wealth in the Middle East and immense inflation in the West. Heavy industry in the United States, and the factory towns they spawned, never fully recovered.

Oil revenue has allowed producing countries to provide employment and generous social benefits to their populations. Public payrolls as a fraction of total employment in the Middle East are four times the level seen in developed economies. For citizens, life is very comfortable.

For many years, OPEC was exceptionally effective at controlling supply. The cartel’s aim was to engineer prices high enough to maximize revenue, but not so high that alternatives became viable. The expense associated with locating new oil reserves or
conducting research into alternative fuel sources was a formidable barrier to potential competitors. 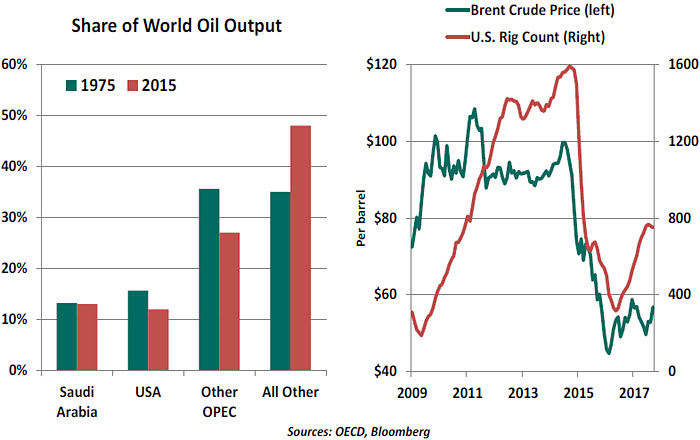 But the cartel’s power started to crack in the 1990s. Non-OPEC producers like Russia and China became more prominent, and divergent agendas between OPEC nations made sustaining output restrictions difficult. And technology made finding and surfacing reserves less expensive.

The development of shale fields has lifted American production substantially in the last decade. The sharp drop in prices that began in 2014 drove marginal U.S. producers out of the market, but those that remain have become more efficient. And they have the ability to turn output on and off relatively quickly in response to changes in market conditions, which puts a cap on prices.

OPEC has persisted in its attempts to establish and enforce supply restrictions, bringing Russia into recent rounds of negotiation. (To this end, King Salman of Saudi Arabia was in Moscow for conversations this week.) Many Middle Eastern countries need crude to trade well above $60 per barrel on a sustained basis to support current levels of government spending. (A list of these “fiscal breakevens” can be found here.) But any quota system is tenuous, given the cash needs of individual participants.

Cheaper oil has forced OPEC countries to dip into their financial reserves to sustain government spending. Assets in Saudi Arabia’s sovereign wealth fund have declined by almost one-third from their 2014 peak. While still substantial, this buffer may not be sufficient to sustain current levels of public spending if the price of oil settles at or below $50.

Long-term projections for oil prices have always been surrounded by a high degree of uncertainty. On the supply side, estimates of potential reserves change with each new find, and the potential yield from those reserves can rise as technology allows more comprehensive harvesting. Interruptions occur periodically: sanctions, regime changes and shipping frictions have hampered OPEC members in the recent past.

On the demand side, the outlook has two divergent drivers. The world’s population continues to grow, which will add to oil demand. Developing countries that have not been intense users of energy will increase consumption as they modernize. Increased income and wealth in the emerging world will allow more households to own vehicles and to purchase goods that are shipped by land, air and sea.

In developed countries, however, the story is different. Roughly three-quarters of petroleum is used for transportation, a frontier which is experiencing a series of disruptive cross-currents. Electric vehicles are advancing, thanks to innovations in battery technology and environmental sensitivity. (Energy is still required to run them, but oil is not a leading fuel in power generation.) This led The Economist to predict “The Death of
the Internal Combustion Engine.” 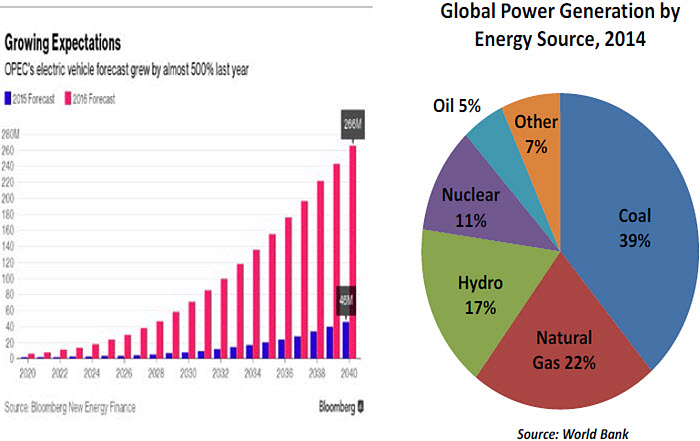 Further, technology is advancing efficiency in transportation. Ride-sharing is reducing the time that vehicles are idle and limiting automobile ownership in urban centers. Sophisticated logistics and the rise of online merchants (at the expense of traditional retailers) are limiting the number of miles traveled by physical goods.

Some forecasters are anticipating a return to $80 crude, but others see a prolonged period of more moderate prices. The risks seem to be arrayed on the downside, which has led the economies of the Middle East to seek a greater degree of diversification. The International Monetary Fund offered a blueprint for this process last year; Saudi Arabia has committed itself to Vision 2030, an aggressive plan to diminish the country’s reliance on petroleum for prosperity.

The architect of the latter plan, Saudi Crown Prince Mohammed bin Salman, is seeking to inject additional dynamism into his economy. (One Saudi official was quoted as saying that “Saudi Arabia is like an obese man disfigured from decades of gluttony and idleness.”) Private sector incentives and additional investment in education will aim to reduce reliance on government support. Ideally, this would also release entrepreneurial energy that can raise the profile of service industries, which are not as prominent in the Middle East. To finance these efforts, a portion of Aramco, the Saudi oil company, is to be offered to the public.

The transformation is incredibly ambitious. Success will require updating mind-sets and introducing a greater degree of self-reliance. The region is relatively young, and Arab millennials (unlike their Western counterparts) are not overly ambitious. Factions will certainly speak out in opposition of change, which may extend from the economic to the social arena.

Saudi Arabia has been an island of stability in the Middle East, and there is fear that diminished government contracts and patronage could create dissonance. Early efforts to reduce subsidies and adjust employee benefits have been met with stiff resistance.

But when disruption is on the horizon, those in its path have the choice of delaying it or embracing it. History has been much kinder to those who embrace change, a fact that is not lost on the next generation of Arab leaders. The transition will not be easy, but it cannot be deferred. And the world is vested in its success.

At the beginning of the year, a string of European elections loomed menacingly over the outlook for the region. Populist victories in the United Kingdom and the United States threatened to cross the English Channel and change the postwar paradigm of continental cooperation.

The last of these ballots is now past. While the eurozone no longer seems in imminent danger of dissolution, the accumulated results hardly represent a resounding endorsement of the established order. Unless the victors address the roots of resurgent nationalism, the next round of plebiscites may be more unsettling.

Angela Merkel and her party easily won a plurality in the German Federal elections, but her victory margin was diminished from its past standing. Significantly, the Alternative für Deutschland (AfD) became the first far-right party to be seated in the Bundestag since World War II. The AfD seeks to curb immigration and cooperation with other European countries, two of the pillars of Merkel’s 12-year leadership.

The AfD drew a lot of support from the eastern part of the country, which has not shared fully in Germany’s recent prosperity. Unemployment is higher in that region, and per capita output is lower. Trade and immigration are seen as threats to be limited, not avenues of opportunity. These themes are similar to the ones that spawned Brexit and the Trump presidency.

The AfD will not be able to steer the German agenda. In a way, it is a party divided; its moderate and radical factions will likely struggle to agree on a unified agenda. It won only 13% of the vote, and will not be included in the coalition that Merkel will seek to form.

Nonetheless, its progress should not be ignored. Broad economic advances in western countries since the financial crisis have masked divisions beneath the surface. To sustain popular support, regimes across Europe and the United States will need to do more to spread opportunity more evenly.

In the last government, Merkel led a “grand coalition” with Germany’s second-largest party. But a split between them will likely force an alliance among parties with disparate agendas. A “Jamaica coalition” (so-called because the colors of the component German parties match the ones on the Jamaican flag) may emerge.

Economically, two key areas will be the focus of attention. Firstly, the scope of Germany’s cooperation with the rest of Europe may narrow a bit; this will slow progress towards further fiscal integration. The new regime may have different views on the proper construct of Brexit, which could complicate negotiations that are in desperate need of additional clarity.

More positively, it appears likely that the new German government will be somewhat less austere. Germany has been running persistent budget surpluses while its major eurozone partners are in deficit. Should the Teutonic purse strings loosen (there are proposals for a tax cut or additional federal spending), it could add productively to the gathering economic momentum in the region.

Merkel’s diminished standing at home may place French President Emmanuel Macron at the center of European leadership. (Perspective on this transition can be found here.) This would have seemed an unlikely outcome at the beginning of 2017, when France seemed likely to fall more deeply into populism. To be sure, Macron has his own domestic issues to deal with: tense negotiations with France’s labor unions lie ahead. But his speech last week laid out a clear vision for what Europe should aspire to.

Many will breathe a sigh of relief at the end of this year’s European election season. But the outcomes suggest that there is no time for relaxation.