The Tipping Point for Central Banks

When my son began playing soccer, he fell into the habit of blaming every unfortunate outcome on match officials. In his telling, every goal he allowed was attributable to a missed offside call or an uncalled foul. The apparent injustice was overwhelming.

To provide perspective (and to generate earnings for college), I signed him up for training to become a referee. Two days in the classroom gave him an appreciation for the laws of the game, but the real education came when he first donned the striped jersey. As he adjudicated events on the field, he became the object of sideline vitriol. He came to realize that expecting infallibility on the part of officials is unreasonable, and his complaints dwindled to a precious few.

In the financial arena, investors often blame unfortunate outcomes on officials within the world’s central banks. Their grievances are many: central bankers don’t communicate well, they have the wrong objectives and they sometimes veer into places they don’t belong. The criticism has reached a fever pitch as monetary policy seeks to retreat from the programs that were implemented after the financial crisis. But some perspective is in order.

Historically, central banks are most at home when in the background. Their central function—regulating the supply of money in the economy—has not traditionally attracted much attention outside academic circles. Central bankers said little, kept their balance sheets small and didn’t comment on asset price levels. Officials typically shunned the limelight and avoided making statements that could be construed as guidance. Alan Greenspan once famously said, “…if I turn out to be particularly clear, you’ve probably misunderstood what I said.” 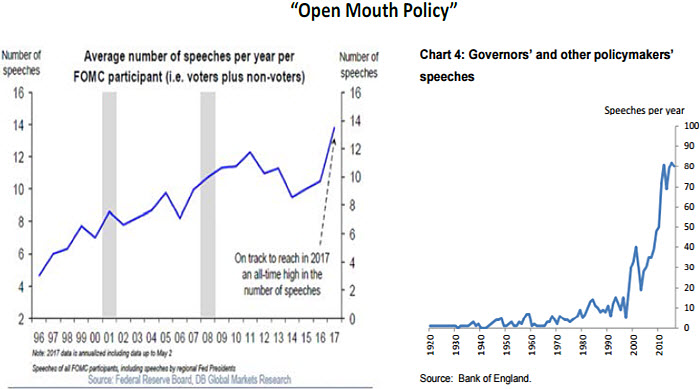 This all began to change about thirty years ago, when public interest in financial markets began to rise. Savers became investors as bank products no longer captured their wallets or their imaginations. At about the same time, media coverage of business took off, with the creation of several 24-hour news networks covering that space. Discussions of central banking became a staple in the effort to fill all of that air time.

Central bank officials were, at first, chary about entering the media maelstrom. Sound bites are antithetical to the more nuanced analysis required to explain the economy. Data is noisy and requires careful interpretation. And, let’s face it: most central bankers haven’t received much training in forms of modern communication.

Inflation targets were adopted to provide a framework for internal and external central bank conversations. The “2% solution,” an export from the Reserve Bank of New Zealand, quickly took hold in the largest developed markets. Targets are intended to anchor inflation expectations, and provide a high-level guide to monetary policy. (If inflation is running below target, the tendency would be to ease; excessive inflation would prompt tightening.)

The reclusive tendencies of central bankers had to be overcome when global interest rates started getting very low. Among the unconventional tools employed in the past decade has been forward guidance, which is essentially a promise to do something that has an impact on market expectations. (For example, suggesting that short-term interest rates will remain low for a long time should—all else equal—bring down longer-term interest rates and promote borrowing further out on the yield curve.) Steering expectations requires frequent, cogent and consistent communication.

At the depth of the crisis, central banks were thrust forcefully from the wings to center stage. Positioned to move with speed and size without requiring incremental legislative approval, they became, in the words of author Mohamed El-Erian, “The Only Game in Town.” As they accumulated assets, monetary authorities recognized their activism might eventually attract criticism. But they deemed it preferable to presiding over economic Armageddon. 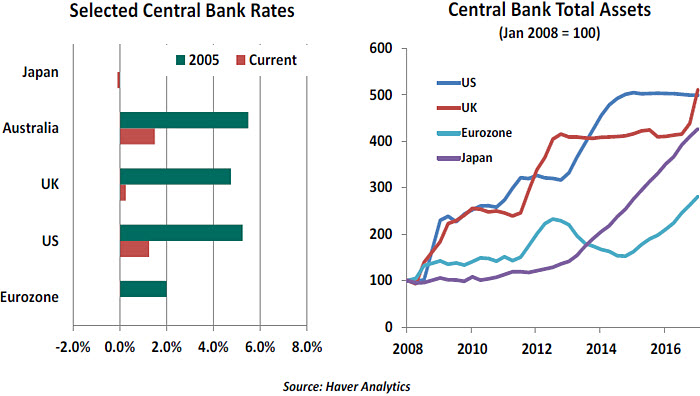 Fortunately for us all, the world’s economies have recovered and we are enjoying a coordinated global expansion. It seems clear that monetary accommodation should be scaled back. But just as there was no precedent for the scale of post-crisis policy support, there is no blueprint for reducing it. Having done the hard work to engineer an enduring recovery, central banks are loath to unwind too rapidly. But at the same time, they must manage the risk of inviting asset price excesses again by staying too easy for too long.

To complicate matters further, the post-crisis world has been characterized by a series of apparent paradigm shifts:

These deviations from past patterns render some of the central bank’s models and intuition much less helpful. This adds degrees of difficulty to formulating and communicating strategy. Market participants have not dealt well with the resulting uncertainty.

There has also been heightened tension between politicians and central bankers. Mark Carney, governor of the Bank of England, has a frosty relationship with U.K. prime minister Theresa May; Mario Draghi, president of the European Central Bank, has wrestled with his governing council and implored European legislators to move on structural reform; and Janet Yellen, chair of the Board of Governors of the Federal Reserve System, has been the subject of curt treatment during recent Congressional testimony. Central bank independence, once sacrosanct, is now being questioned.

This stems, in part, from the aggressive way monetary officials have pursued their mandates during the past decade. Legislators were likely unaware of the extensive power held by their central banks, and have been eager to control it. Further, asset purchases by central banks create allocative effects that will please some and not others. (Low interest rates help borrowers but hinder savers; buying mortgage-backed securities (MBS) instead of corporate bonds favors housing at the potential expense of other economic sectors.)

A recent survey found that trust in the world’s central banks has fallen significantly since 2007. No doubt this has something to do with the banks’ failure to see the crisis coming. But the difficulty of communicating authoritatively with governments, markets and the public about goals and outcomes has not helped.

As we embark upon a reversal of course, we can anticipate some fits and starts. Turning points are difficult to diagnose, and reactions are sometimes mistimed and poorly calibrated. But before declaring central bankers clueless and effete, allowance must be made for the shifting landscape in which they operate. It was easier when the cameras were off and the coast was clear.

In the best-refereed soccer matches, you barely notice the intervention of officials. The world’s central bankers are certainly hopeful for the day when they attract much less attention.

As expected, the Federal Reserve voted to begin reducing its balance sheet at the beginning of next month. The move was widely anticipated, thanks to thorough foreshadowing; communication worked this time around.

A prospective balance sheet strategy was released in June. Monthly inflows will only be reinvested if they exceed certain thresholds (initially $6 billion for Treasury securities and $4 trillion for MBS). These levels are set to increase every three months. At this pace, the Federal Reserve’s balance sheet should reach a new steady state in about four years.

The Fed certainly has the option of slowing or speeding up the process, but Yellen reiterated that the program will ideally operate on autopilot. Our background on the Fed’s balance sheet unwind can be found here. 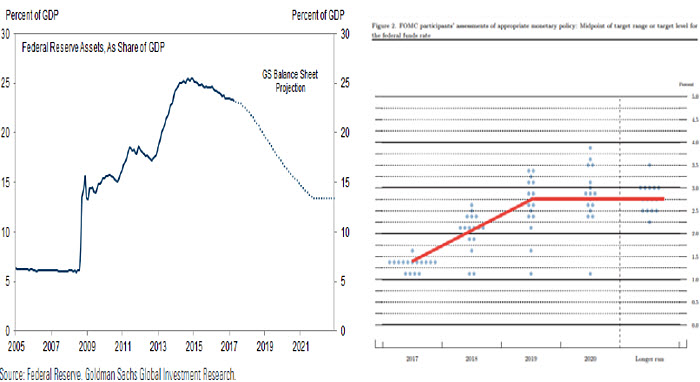 Perhaps a more surprising outcome of this month’s Fed meeting was the collective affirmation that one more interest rate increase is likely this year and three are expected next year. This year’s retreat in inflation is apparently seen as transitory; the Fed’s collective forecast reflects an anticipated convergence to 2% next year. Market-based odds on an interest rate hike from the Fed in December jumped from about 20% early in the week to nearly 70% by Friday.

With four open positions on the Board of Governors and the potential for more openings ahead, this quarter’s dot chart must be taken with a grain of salt. There could be an entirely new set of contributors to the plot in six months, so it is difficult to draw much direction about 2018 and 2019 from the current map. More generally, the value of any forward guidance from the Fed has declined as Board turnover looms.

The post-meeting statement included a passage on the impact of the two hurricanes that struck earlier this month. In the Fed’s eyes, they are unlikely to have an impact on the long-term outlook for economic growth. The statement did not mention any concern about financial conditions, although we suspect they were a topic of conversation during the meeting. We’ll have to wait until the minutes are released to find out.

The next “live” meeting for U.S. monetary policy will occur in December. There will be a lot of data to digest between now and then, and potentially some lineup changes at hand for the Fed.

From this distance, it seems apparent that the U.K. economy is struggling in the wake of Brexit. As we described, second-quarter growth in Britain moved ahead at a bare crawl as a weak currency took its toll on real incomes and spending. The corporate sector has been wracked by uncertainty as firms seek contingency strategies that will allow them to serve clients across the European Union (EU) in the event of a harder separation between trading partners.

It’s therefore been surprising to witness the increasing hawkishness of the Bank of England’s (BoE) Monetary Policy Committee (MPC). In June, three dissenting votes (out of eight) called for an increase in interest rates. While that number fell to two in this month’s balloting, the post-meeting statement indicated that “some withdrawal of monetary stimulus was likely to be appropriate over the coming months.” On the basis of this clause, markets moved to assign a much higher likelihood to an interest rate increase from the MPC this year.

The challenge for Carney and his colleagues is that U.K. growth and inflation are going in different directions. Inflation is currently running far in excess of the BoE’s 2% target, pushed up primarily by the weakness in the British pound. Other leading contributors to inflation, including wage growth, appear more benign even though unemployment is at a forty-year low.

It might be reasonable to view the realignment of sterling as a kind of “level change” that will not add to the long-term inflation outlook. But in a speech this week, Carney observed that Brexit was likely to push up the price level more persistently. Terming Brexit as an example of “de-globalization,” the BoE Governor predicted that the re-casting of trade relationships with the EU and other partners would result in higher prices paid by U.K. consumers. He further observed that a slowing rate of immigration could produce greater wage pressures.

These are all interesting observations, but the risks for the U.K. lie mainly on the downside. And in such an environment, it would seem counterproductive to tighten credit. We still do not anticipate a move from the MPC any time soon.

The Bank of England (through its governor) has threatened to raise interest rates several times over the past few years and never followed through. It may be at risk of losing the power of persuasion, robbing it of one of its policy levers. Going forward, silence might be golden.