A quote often attributed to St. Augustine, the early Christian theologian, is: “The world is a book, and those who do not travel read only a page.” I feel blessed to be able to travel as much as I do—not because I’m a big fan of 10-hour flights or living out of a hotel room. I feel blessed because travel allows me to meet and speak at length with some truly fascinating and successful people, from CEOs of firms both large and small, to deal lawyers, to audit partners.

Hearing varying opinions on global issues and politics has helped expand the scope and depth of my “book,” or understanding of the world. In turn, I enjoy sharing some of these thoughts with you, as regular readers of Investor Alert and Frank Talk know well.

Opinions come a dime a dozen, of course, and in today’s hyper-partisan world, it’s impossible to expect everyone to agree on all things all of the time.

Case in point: I recently polled readers on their approval of the way Donald Trump has handled his job as president so far. This isn’t a scientific poll by any stretch of the imagination, but for whatever it’s worth, a combined 56 percent of participants said they approve of the president. Amazingly, that’s roughly the percentage of Electoral College votes given to Trump in November. (The exact figure is 56.87 percent.) Some could easily take from this poll that Frank Talk readers are huge Trump supporters—and many of them are—but that would be overlooking the fact that nearly 40 percent said they disapprove of the way he’s handled his job.

I share this because it serves as a relatively accurate cross section of the types of opinions and perspectives I come across during my travels. Some of those opinions end up informing my own thinking, some don’t—but all of them are added to my “book.”

Now with North Korea launching even more rockets over Japan, the market makes new highs. This is what I was asked most often this week on CNBC Asia, Bloomberg Radio and Fox Business. As I said then, I’m bullish because the purchasing manager’s index (PMI) is up and oil prices are down, thanks to the ingenuity of Texas fracking, which has created a global peace tax break. The weaker dollar is favorable for exports and gold. Bitcoin on Sale After the China-Dimon One-Two Punch

Someone whose opinion I greatly admire, even if I don’t always agree with it, is Jamie Dimon’s. The highly-respected JPMorgan Chase CEO was asked this week at a global financial services conference in New York to share his thoughts on bitcoin—which can be as polarizing as President Trump. Some people love the cryptocurrency, some people hate it.

Although he likes blockchain technology, which bitcoin is built on top of, he began by saying he would fire any JPMorgan trader who was caught trading bitcoin, which he went on to call “stupid,” “dangerous” and “a fraud.”

“You can’t have a business where people can invent a currency out of thin air,” he said.

With all due respect to Dimon, some might point out that “inventing a currency out of thin air” is how we got Federal Reserve Notes and other forms of paper money in the first place. Even he admits this:

“The first thing a nation does when it forms itself—literally the first—is forming currency.”

Bitcoin—and any of the 800 other cryptocurrencies—takes this idea to the next level, the main difference being that no third party or monetary authority controls its issuances or transactions. It’s all peer-to-peer.

Governments tend to resist anything that disrupts the status quo, which is why we saw China restrict new initial coin offerings (ICOs) last week. I suspect we’ll see a few more countries attempt to regulate ICOs in other ways, and as long as these regulations are fair and reasonable, I welcome them.

The bitcoin price was knocked down following the one-two punch of China and Dimon, falling 39 percent from its peak of $4,919 on September 1. Yesterday it lost more than $611 a unit, one of its worst days ever, but today the cryptocurrency rallied strongly again.

With its ability to validate all transactions in an immutable electronic ledger, the blockchain has the potential to be as disruptive as Amazon was in the late 1990s. When the company went public in 1997, there were serious doubts whether people would willingly give up their credit card information just to buy a book. Since then, Amazon stock is up 8,000 percent, and founder Jeff Bezos briefly overtook Bill Gates in July to become the world’s wealthiest person.

If you’re curious to learn more about how blockchains work, I recommend that you watch this engaging two-minute video.

In some ways, cryptocurrency more closely resembles gold. Just as there’s only so much gold that can be mined in the world, the number of bitcoins that can ever be mined is set at 21 billion. But the exact amount is irrelevant. It could have been set at 21 trillion—the point is that supply is limited and finite.

The same cannot be said of the U.S. dollar, or any fiat currency, which today is printed “out of thin air” with abandon. This has led to hyperinflation in some instances and destroyed the value of several countries’ currency, including the Zimbabwean dollar and, more recently, the Venezuelan bolivar.

I’m not suggesting we’ll see the same thing happen here in the U.S. Nevertheless, rampant money-printing has certainly contributed to many people’s dwindling trust in traditional monetary systems. A 2016 Gallup poll found that Americans’ confidence in banks is stuck below 30 percent, where it’s been since the beginning of the financial crisis nearly 10 years ago.

When more money is printed, gold has traditionally been a beneficiary, for two key reasons: 1) If the money-printing is accompanied by economic growth, greater access to capital might boost demand for luxury items, including gold (the Love Trade); and 2) If the money-printing isn’t accompanied by economic growth, inflationary pressures might prompt investors to increase their exposure to real assets, such as gold (the Fear Trade).

These were among the findings in a 2010 World Gold Council (WGC) study. Even after seven years, the findings still apply. As you can see below, the price of gold expanded over the years as more and more money was printed. If we want to get really technical, the WGC estimates that for every 1 percent increase in U.S. money supply, the price of gold tends to rise 0.9 percent—nearly as much—within six months.

According to the most recent Federal Reserve report (September 7), more than $13.67 trillion in M2, or broad money, are now in circulation. That’s up about 1 percent since the end of June, when M2 stood at $13.54 trillion.

So will the gold price climb 1 percent in response? That would amount to only $13 an ounce, but remember, there are other factors driving gold, including negative real interest rates and geopolitical uncertainty.

One final note: A former UBS metals trader was arrested and charged this week with fraud and conspiracy over his alleged role in placing “spoof” orders for precious metals futures contracts. Andre Flotron, a Swiss citizen, was arrested while visiting his girlfriend in New Jersey. Flotron began working for UBS in 1999 but was put on leave in 2014.

See Zero Hedge for more on conspiracies and convictions in court over price manipulation of precious metals. Many cryptocurrency advocates allege this is why Jamie Dimon is so aggressive in knocking down bitcoin. The enthusiasm for bitcoin has accelerated this year with South Korean and Japanese banks accepting them as a form of money. 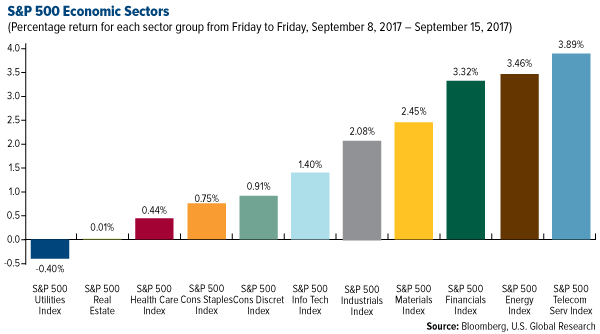 This week spot gold closed at $1,321.28, down $25.17 per ounce, or 1.87 percent. Gold stocks, as measured by the NYSE Arca Gold Miners Index, ended the week lower by 4.44 percent. Junior-tiered stocks outperformed seniors for the week, as the S&P/TSX Venture Index came in higher by 0.99 percent. The U.S. Trade-Weighted Dollar finished the week slightly higher by 0.45 percent.