I was very disappointed at the recent health care fiasco. No, I’m not referring to the failure of Congress to replace or reinforce the Affordable Care Act (ACA). The fiasco I am talking about was my daughter’s earring mishap. She and a friend apparently improvised new openings in their lobes without professional supervision. A few weeks later, I came home to find her in pain from a faux rhinestone stud that had become embedded in the improperly sized hole. It took a trip to the clinic to unearth the darn thing.

The evening’s entertainment didn’t end there. To guard against infection, she was directed to take an antibiotic, which we had to acquire from a local pharmacy. Given my luck that day, it wasn’t surprising that a long line of folks were waiting for their prescriptions. The whole affair took nearly three hours of my life, which I will never get back.

In retrospect, one aspect of that sad episode should not have come as a surprise. America consumes a lot of pharmaceuticals (I’m referring here to the legal kind), so a long line at the dispensary is not uncommon. Given our demographics and the structure of the U.S. medical industry, it’s likely that those lines will be getting even longer in the years ahead. That trend, combined with other health care challenges, could test finances in both the public and private sectors.

We wrote a piece last fall entitled “U.S. Health Care Needs Major Surgery.” It detailed a system where costs are spiraling while patient outcomes are falling behind those of other countries. A significant and growing fraction of those costs are paid by the Federal government. 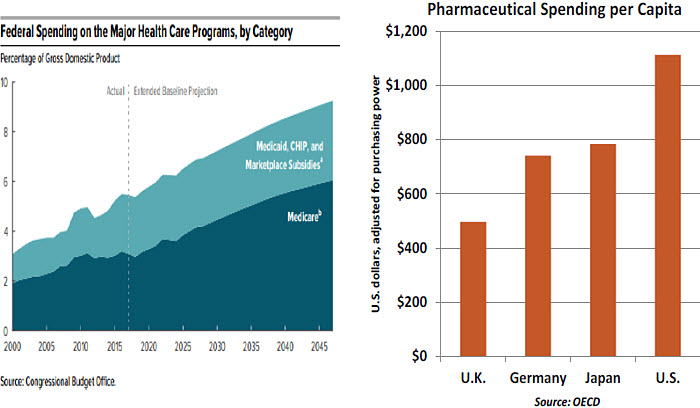 Pharmaceutical costs represent about 10% of total U.S. health care expenditures, or about $325 billion each year. The Center for Medicare and Medicaid Services (CMS) projects that the value of prescriptions consumed will increase by 6.3% annually over the next decade, well above the expected rate of general inflation and household income growth. The gap between U.S. per-capita pharmaceutical spending and the comparable level in other countries will almost certainly get even wider than it is today.

Some of the escalation is due to the aging of the Baby Boom generation. But costs per patient per year for medication are also rising rapidly. Policy makers are anxious to bend this cost curve, an effort which has support from 64% of Democrats and 60% of Republicans.

There are potential remedies under consideration. Unfortunately, none of them will be easy to achieve.

Capping these costs, or limiting access to the drugs, would soften the blow. But pharmaceutical companies contend that an inability to recoup costs would discourage innovative research. (The United States does a substantial fraction of the world’s pharmaceutical development.) And it is difficult for societies to balance the costs and benefits of applying new treatments. 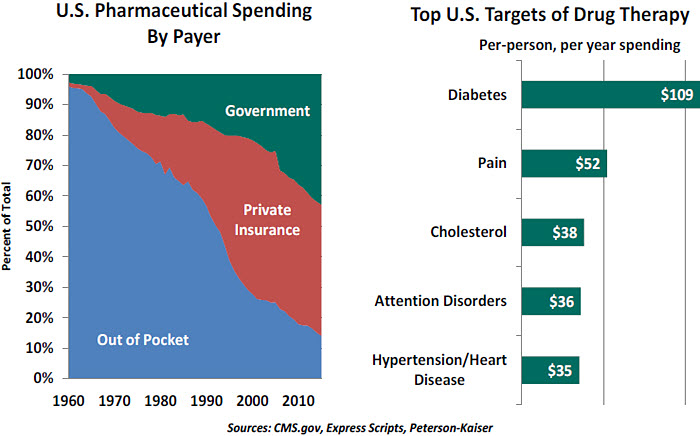 As other countries in the periphery (such as Italy) contemplate their own economic strategies, the Spanish example provides a useful data point. It hasn’t been the easiest way forward, but there may be no other way.

At any given moment, there are regional hot spots that threaten to become global conflagrations. Fortunately, these threats are most often contained, and when they do escalate, the world’s worst fears aren’t always realized.

Current tensions between the United States and North Korea have risen to the top of many lists of top concerns. The roots of antipathy between the two are decades old; no peace treaty to end the Korean War was ever signed. Chinese sponsorship of the communist effort was, and is, extensive. But a relatively peaceful (if tense) status quo has been broken by the advancing nuclear weapons program directed by Kim Jong-un. The rhetoric passing back and forth between Washington and Pyongyang recently hasn’t helped calm the situation.

From an economic perspective, North Korea is a basket case. An estimated 40% of its citizens live in poverty; power shortages and drought plague its basic industries. In a bid for relevance, its leadership has placed all of its eggs in the basket of military aggression. Experts suspect that Kim’s gambit is to use his arsenal as leverage to gain economic concessions. A bad outcome cannot be ruled out, but remains unlikely. Reflecting this, South Korean equity prices have rallied this year amid a series of North Korean missile tests. 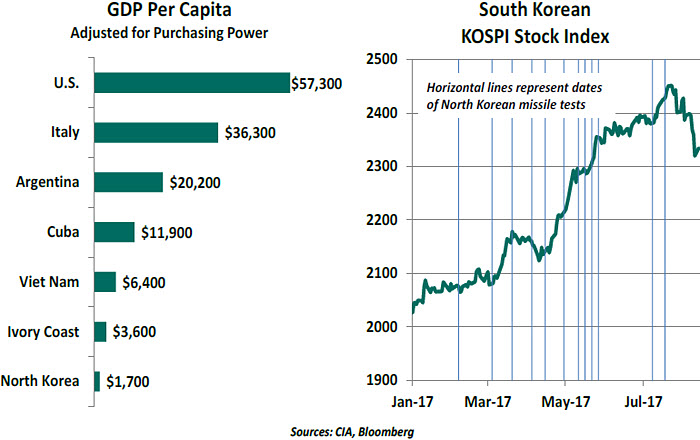 On a number of occasions over the past two decades, challenging events caused an immediate market retreat, only to see it regain traction in very short order. Our colleague Jim McDonald covers this topic well in his piece “Keep Calm and Carry On.”

One suspects that the limits of China’s support for North Korea are being tested. China’s aid in defusing the situation will be an element of broader discussions with the United States over intellectual property protection, steel tariffs and other touchy economic matters.

Leadership styles on both sides of the impasse are unconventional, and recent rhetoric is not helpful to the cause of compromise. World markets have performed so well, without much volatility, that they may be vulnerable to a correction. But history suggests that situations of this kind rarely create lasting economic consequences.