Why Are U.S. Wages Stuck In A Rut?

As many of you know, making a clean getaway out of work and into vacation isn’t easy. Last-minute requests need to be addressed, ongoing efforts must be delegated to others and out-of-office messages have to be posted. (After which you will receive 25 e-mails asking if you can call in to a committee meeting from your holiday.) The process can be very stressful.

So when I sat down to dinner on the first night of my recent sojourn, I was looking forward to relaxing. The sun was setting, the beer was cold and I had my family around the table. Just as I felt my blood pressure beginning to descend, my eldest and her fiancé began detailing their wedding plans. Sponsorship levels and guest lists were up for discussion; these are hardly the subjects of light conversation. I had to order another beer to calm my nerves.

I think I will also need a pay raise to generate the capital needed to celebrate the occasion properly. But while U.S. employment conditions are their best in a decade, pay raises remain very modest. This puzzling outcome is complicating the economic outlook and the conduct of monetary policy. There are many theories that attempt to explain this trend, but there is no definitive sense of whether it will pass or persist.

Supply and demand theories suggest worker scarcity would increase the price paid for labor. This has certainly been the case during recent American expansions, when annual wage gains topped 4%. But this time around, both nominal and real hourly earnings growth has failed to match the peaks seen in past upturns. 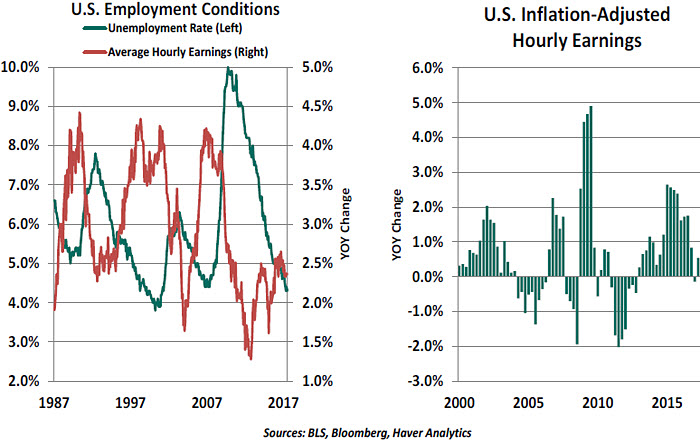 To be fair, the unemployment rate does not fully capture the full extent of available human capital. Wages can be held down by pockets of workers not well accounted for by this metric. But a broader range of indicators (part-time employment, long-term unemployment, quit rates and job openings) indicate the U.S. job market is as strong as it was ten years ago. Labor force participation is still below its long-run trend, but the difference between the two is narrowing and research has found addiction and disability to be limiting prospects for many not actively looking for work. All of this suggests there isn’t much idle capacity left and that wages should be increasing more quickly.

Observers have offered a series of potential explanations for the apparent breakdown in the traditional relationship between the availability of labor and its cost.

a) Many people get a series of benefits through their employers, health insurance chief among them. When the value of these benefits rises, workers might be content with more modest increases in their salaries. During the first six years of the current expansion, the value of employee benefits was rising much faster than wages were; this might have kept a lid on pay demands. Of late, however, the value of benefits has not been rising as quickly.

b) At the Federal Reserve’s 2014 Jackson Hole gathering, Janet Yellen hypothesized that there was “pent up wage deflation” left over from the 2008 recession. Since firms typically do not cut worker wages during slow times (preferring to cut workers, instead), they limit wage increases for a time during recovery periods until worker value and worker compensation come into closer alignment. This might have been the case during the initial phase of the current expansion, but it seems logical that this effect would dissipate over time.

c) Workers appear less willing to relocate. Housing is relatively expensive in job/population centers, and movers leave behind sources of financial and social support. A growing cultural divide between urban and rural areas may also dissuade migration. Limits on mobility limit the ability of workers to seek and find higher wages elsewhere. 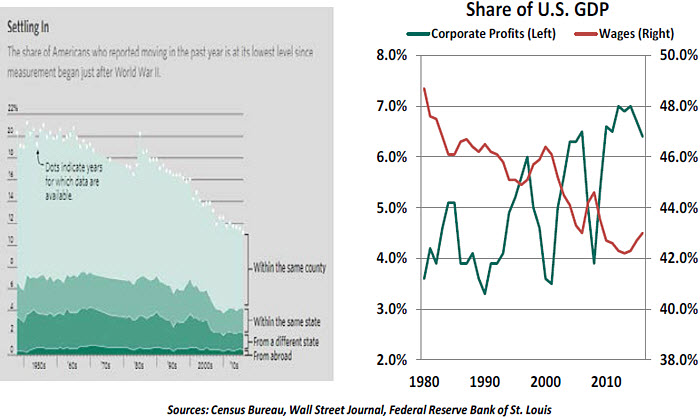 d) Corporations have become increasingly resourceful at limiting their wage bills, either by shifting work to low-cost locations or by hindering the bargaining power of their employees. In addition, the increased pace of corporate consolidation over the past several years has made it more difficult for employees to increase their wages by moving to competitors, and the slow pace of small business formation has limited opportunities at start-ups. The fraction of U.S. national income accounted for by corporate profits relative to wages typically declines during the course of expansions, but not so much this time.

e) Robotics and artificial intelligence are taking deeper root in the workplace, and some think that the advancing application of technology is placing a lid on worker wages. But as we discussed recently, innovations in the workplace tend to raise worker wages by increasing productivity. And in any event, it will be years before many novel applications of technology are commercially viable.

The current expansion’s disappointing productivity growth is probably the most cogent reason for the muted wage growth. Low productivity means that increases in output require more employees, reducing the value of individuals to the firms that employ them.

We are expecting productivity to improve in the years ahead, and we expect labor shortages in particular places and industries to become more acute. The combination of the two should lift wages and help the Federal Reserve reach its 2% target for inflation.

Having digested the wedding outline (barely), I am certainly hoping that there is ample capacity in the markets for caterers, priests, seamstresses, bands and florists. If not, the pressure on my real wages will be acute.

Earlier this year, we noted the emerging monetary divergence between developed markets and emerging markets (EMs), wherein the latter were feeling comfortable to pursue domestically oriented monetary policies even as the Federal Reserve, and to a lesser extent the European Central Bank, turned hawkish.

Since then, central banks in major emerging markets - India, Russia, South Africa and Brazil - have delivered policy rate cuts. While there have been country-specific factors involved in each case, declining inflation and unsatisfactory growth have been the underlying themes in all cases. As we have repeatedly noted, the key enabler for this policy independence has been a steady improvement in macroeconomic fundamentals that has allowed EM central banks to shrug off the Fed’s tightening cycle.

Despite narrowing interest rate differentials, capital flows into emerging markets have been strong so far this year, leading many to question whether the markets have been too sanguine about EMs. Trade balances and credit growth are good starting points if one is looking for evidence of imbalances – both indicate excess borrowing and spending. Excepting China (discussed later), credit growth (as measured by the Bank for International Settlements’ credit gap indicator) is too low in most cases. A combination of weak growth and deleveraging explains this. In fact, the credit cycle has yet to turn upwards in key emerging markets, rendering any talk of financial excesses premature.

There is plenty of room for credit and spending in emerging markets to grow cyclically. Inflation remains subdued, suggesting little evidence of demand outstripping supply. Current account balances concur with this story, with most EMs either posting surpluses or small deficits. Therefore, it is too early start worrying about EM macroeconomic fundamentals.

The spate of dollar bond issuances by stressed petro-dollar states, and countries with a bad track record of servicing their debt, (such as small African economies and Argentina) has raised eyebrows. But it is important to keep in mind a couple of points. Firstly, external debt as a percentage of gross domestic product (GDP) remains low in most cases. Secondly, more and more of these countries have flexible exchange rate regimes and significant reserve buffers. Finally, much of the refinancing risk now rests on private balance sheets and is largely hedged. Sudden stops can create short-term challenges with rolling over, but the risk should not be overstated. 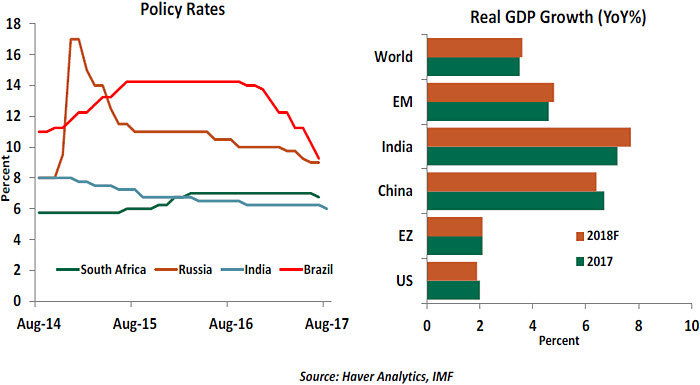 There are a few dark clouds on the political and policy front, but the economic or financial implications for EMs are less obvious. Countries such as Poland, Hungary, Turkey and the Philippines have seen a resurgence of nationalist sentiment and some repression of democratic institutions. In the first two cases, the European Union has had an important restraining influence on the more extreme tendencies of national governments. The political issues in Turkey have been going on for a while now, and are largely priced in to the financial markets. In the Philippines, the economic and diplomatic implications of President Duterte’s agenda are not clear.

We recently noted the political trouble for the governments in Brazil and South Africa, something that has weighed on their markets. While terribly disappointing, these issues are largely reflected in asset prices and might potentially provide upside.

The dysfunction in Washington has been both a boon and a bane for EMs. The concerns over a border adjustment tax and doubts over the North American Free Trade Agreement have faded for now, allowing EMs to breathe a sigh of relief. Washington’s inability to pass legislation and the fiscal challenges facing the Congress has also weighed down the U.S. dollar, something that has been beneficial for EM balance sheets.

On the other hand, any inability to raise the U.S. debt ceiling, or a possible shut down of the American government, could be a trigger for market risk aversion. Again, this could lead to temporary rather than systematic issues for the EM universe.

Oil has had an important role to play in the EM rebalancing and an oil shock can be potentially destabilizing. We believe that the reason for any oil shock would be more important than the price change itself. If it is demand-led, then it should be welcome. However, a supply shock would be a detriment for everyone but the handful of major exporters.

Finally, China remains a key driver for EM growth – both as a source for final demand and as a support for commodity prices. We do not see a hard landing as a base case scenario. We presume the upcoming party congress in China will include discussion of the country’s debt burden and some financial reform to bring credit into line. China’s debt is almost entirely denominated in its own currency, providing some flexibility in any kind of restructuring. But monetizing the debt could potentially raise inflation, lower real incomes and damage Chinese consumption.

U.S. trade policy towards China remains in a state of flux. After some initial friction, conditions seemed to improve on the heels of the meeting between presidents Xi and Trump in Florida last April. More recently, however, American policy makers have made issues of steel dumping and Chinese theft of intellectual property. Escalating tensions between the U.S. and North Korea have placed additional strain on Sino-American relations.

We ultimately expect China and the United States to mediate their differences without undue acrimony. This would certainly be of benefit to peripheral Asian countries that benefit from broad trade relationships with both nations.

Overall, we remain positive on EMs, which withstood last winter’s dollar rally and the Fed’s tightening cycle splendidly. It would take a combination of a significantly strong dollar, an unanticipated tightening of global monetary conditions and a marked slowdown in EM growth rates for us to change our thesis. None seem to be in the offing.

Editor’s note: Our colleague Asha Bangalore will be retiring next week after 23 years with Northern Trust. Her contributions to our collective economic understanding have been substantial, and she will be missed. She departs with our great thanks and best wishes.