Editor’s note: Carl is on vacation this week, studying cherry pie and Wisconsin lagers instead of economic indicators. The following is an update of an article that first appeared in this space almost exactly five years ago, shortly after Carl joined Northern Trust. With the debate over central bank rules and communication as active now as it was then, the review seems especially timely.

When I used to ask my children what happened during the school day, I got one of two styles of response. Sometimes they’d say “nothing,” after which you have to depose them like an attorney to get sufficient detail. Or at other times, they’d launch into a narrative of minutiae so lengthy that you had to cut them off. I really didn’t need to know whether the chicken nuggets in the cafeteria were crispy or not.

It is sometimes difficult to find the middle ground between reticence and verbosity. The world’s central banks have been finding this out the hard way, as they try to find the right balance between saying nothing and saying too much in their efforts to signal their intentions to the markets. Some would prefer to end the suspense by putting monetary policy on autopilot and adopting a rules-based approach.

This would be unwise. Even the best of rules requires discretion to operate, and if underlying economic dynamics change, a rigid framework could lead to poor decisions. As much as we might wish for an end to policy ambiguity, it is endemic to the challenge of macroeconomic management.

A generation ago, the curtain of secrecy surrounding monetary decisions was almost complete. There was no immediate announcement of changes in policy; analysts had to infer them from market trading, which sometimes took weeks. Minutes of the meetings of the U.S. Federal Open Market Committee (FOMC) were released with a six-week lag, and background materials considered by the committee were entirely confidential.

Since then, the curtain has been pulled back a great deal. Decisions, and some color around them, are captured in a release that goes out immediately after each central bank meeting. Forecasts of economic conditions are released regularly. Chairmen/women now conduct press conferences to explain their thinking. Some senior central bankers appear as guests on business television.

To some, all of the added color has been helpful. To others, though, the extra information has made monetary policy muddier. Central bankers share a range of opinions, and sometimes change their tones with uncomfortable frequency. Too many voices, and the lack of a clear reaction function, have challenged the market’s powers of interpretation. And there is concern in some corners that central banks have too much independence and not enough accountability.

Many in this latter camp would therefore prefer that monetary policy be set using simple rules that would be transparent to the market. A leading candidate is the Taylor rule, developed by Stanford professor John Taylor, which produces a target overnight interest rate by considering the distance of actual inflation from some target level and the distance of gross domestic product (GDP) growth from its potential. The greater these two
distances are, the greater the need for an adjustment to policy. Formulaically: 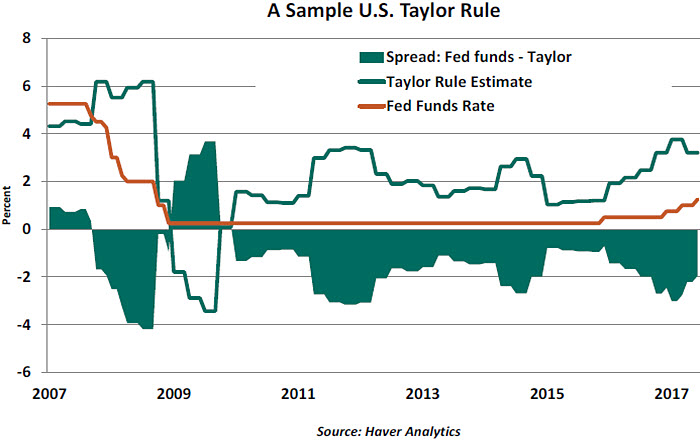 The Taylor rule has won adherents because of its suggestion that U.S. monetary policy was too easy for too long ten years ago, and thereby contributed to excesses which formed kindling for the 2008 crash. Current Taylor rule calculations also suggest that the Fed is being too easy, potentially setting the stage for new problems down the road.

The use of discretion to override the formulaic approach, from this perspective, is to be discouraged: not only can discretion be misused, but it creates mystery where markets want clarity. But central to the application of a rule like Taylor’s is the establishment of key parameters. And mystery surrounds many of them. Consider: 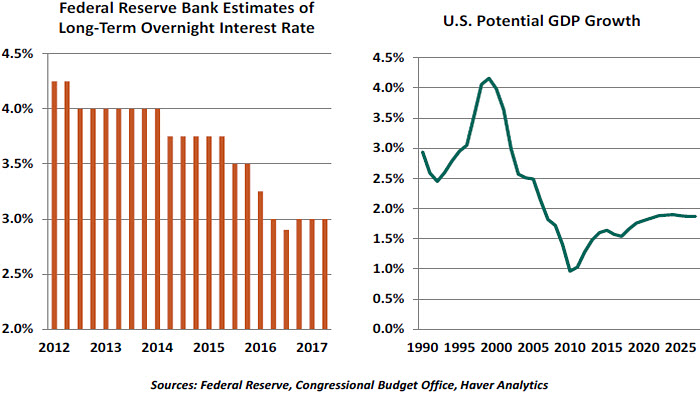 These are but several of many uncertainties that must be addressed before putting a quantitative regime into place. The reality is this: even the application of policy rules involves educated judgment. Rules can be a useful place to start the conversation, and central banks employ them as inputs to their decision-making. But the conversation cannot end there.

With several openings on the Federal Reserve Board soon to be filled, the rules-based approach favored by some in Washington may be used as a kind of litmus test to screen applicants. I certainly hope that candidates are also evaluated based on their ability to reach sound decisions amid uncertainty. Those skills will be called upon frequently.

As my children got older, rules became less effective and less binding. At a certain point, I had to trust we had given them the means to reach sound decisions under uncertainty. There are moments, I will admit, when I wish for additional transparency into their thought processes. Like when they decide to wait until the last minute before packing or paying. My back and my bank account can’t take much more of this…

Among developed economies, Japan has been lodged at the bottom of the economic growth rankings for a very long time. The country has arguably never recovered from its market crash of 27 years ago, and some think it never will. But a review of the evidence reveals encouraging signs.

Abenomics, the set of stimulative policies associated with current President Shinzo Abe, were initiated almost half a decade ago. The project has been more than a partial success. GDP growth, corporate performance, business confidence and employment have all seen improvement. Though reforms have stalled recently, significant gains have been made on several fronts during the last five years, such as increased female labor force participation, the liberalization of hitherto closed sectors such as agriculture and improved corporate governance.

Last week, permanent job vacancies outnumbered applicants for first time on record in Japan. Crucially, labor shortages are now spreading from casual part-time jobs to full time salaried jobs. As we noted recently, part-time employment was one of the factors keeping a lid on wage growth in Japan. That will hopefully change in the near future as employers are forced to attract workers for full-time roles.

It is true that inflation has refused to show its face in Japan, despite substantial monetary and fiscal stimulus. But the present “low-flation” is still an improvement over the deflation that had characterized much of the last two decades. Even though the rate of increase in prices remains stubbornly below the Bank of Japan’s (BoJ) ambitious 2% inflation target, it is worth pondering why Japan needs higher inflation and the accompanying monetary stimulus. 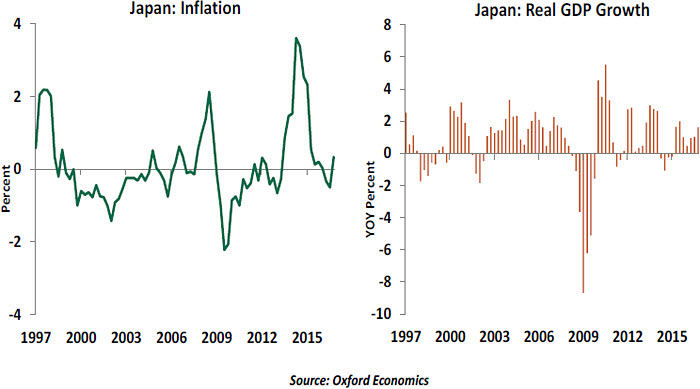 There are a number of economic arguments in the favor of positive (but low) inflation. It does represent price stability, albeit at a point that is uncomfortably close to zero. Positive changes in the price level have curtailed the crippling revenue-liability mismatches that accompany deflation.

But some have argued that unless accompanied by a significant increase in wages, higher inflation is likely to erode household purchasing power and damage economic growth. Until the Japanese wage dynamic evolves to reflect growing labor shortages, pursuing an undeliverable inflation target may not be worth the risks of the extraordinary monetary easing that it entails. This is the question the BoJ is facing in the present day.

The BoJ’s current policy regime has a critical role in ensuring a declining, or at least a stable, path for Japanese public debt to GDP ratio – by far the highest in the world. By keeping interest rates low (monetary policy currently pegs the 10-year government bond yield at 0%), the BoJ helps keep a lid on the numerator, while any incremental inflation increases the denominator. Therefore, the current monetary policy stance is fulfilling some non-traditional goals as well.

Of course, a higher rate of GDP expansion would help, and would certainly be the preferable path to debt reduction. But there are limits to how fast Japan can grow given its mature level of economic development and unfavorable demographics. The Japanese Cabinet Office pegs potential growth at just 0.8% annually. 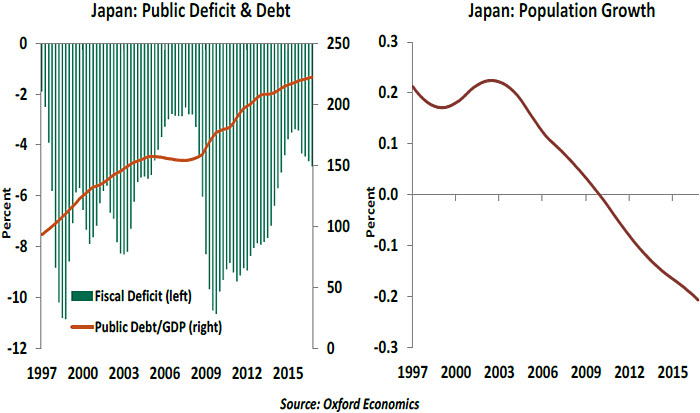 A sub-1% potential growth rate appears abysmally low. But it is important to remember that the Japanese population has been shrinking for the better part of a decade now. Thus, the headline growth figure underestimates productivity gains and the returns on investment. This phenomenon is unlikely to change unless Japanese fertility and immigration trends change significantly.

A typical economy would ideally not be bothered with this divergence as long as per capita output is growing. Unfortunately, average earnings in Japan have been fairly flat for some years now; economic gains have been accruing to the corporate sector and have not been passed on in the form of higher wages. As we have noted before, this is likely to change.

The size of the economy matters for Japan because of its debt burden. But it cannot expect
to just grow itself out of its public debt situation. Japan needs higher inflation and a loose monetary policy.

Japan’s favorable external position, large pool of domestic savings, and reserve currency status means it carries the weight of debt lightly. A large part of that debt is owed to other arms of the Japanese government and domestic institutional investors. Hence, the BoJ can technically continue with its purchase of government bonds in the foreseeable future without much ado.

But monetary policy can only buy time for more fundamental and structural forces to kick in. Japan has made some promising steps in this direction, but there is still some distance left to travel.