Venezuela on the Brink—An Opportunity for Oil Investors? Venezuela is sliding closer and closer toward the brink, and things look as if they’ll get worse, unfortunately, before they improve.

A country that boasts the largest proven oilfield in the world should not be facing such dire food and medicine shortages, not to mention rampant protests and violence in the streets. But that’s what happens when far-left, authoritarian socialist regimes threaten to dissolve economic freedom, the rule of law and democracy itself.

As you might have heard, Venezuelans will be participating in an election this Sunday that could permanently amend the country’s constitution for the worse. Depending on the outcome, President Nicolas Maduro is poised to become the world’s next absolute dictator.

On Wednesday, the U.S. Treasury Department issued economic sanctions on 13 current and former Venezuela government officials in an effort to encourage Maduro to drop the election, which—let’s be honest—is likely rigged in his favor. According to Transparency International, Venezuela is among the most corrupt countries on the planet, ranking 166 out of 176 in 2016.

So why am I telling you this? Again, Venezuela sits atop the world’s largest proven oil patch. Crude accounts for roughly 95 percent of its export earnings. If Maduro does not relent, the U.S. could very possibly target the country’s oil industry next.

As Evercore ISI put it this week, the Treasury Department’s decision is “the first step toward comprehensive sectoral sanctions, including crude oil imports into the U.S.”

This would be phenomenally disruptive to Venezuela’s already fragile economy. Right now, the U.S. is the country’s top cash-generating market. Unlike most other markets, the U.S. pays its oil import invoices in full and on time. Venezuela could always boost exports to other existing clients, but the cash would dry up.

To be fair, such a move wouldn’t be exactly painless for the U.S. either. Venezuela is currently its third-largest supplier of crude, following Canada and Saudi Arabia. Several large American producers, including Chevron, Halliburton and Schlumberger, have joint-venture contracts with Petroleos de Venezuela (PDVSA), the South American country’s state-run oil company. And a number of oil refineries in the U.S. are equipped specifically to handle Venezuela’s notoriously extra-heavy crude. Speaking to MarketWatch this week, Oil Price Information Service energy analyst Tom Kloza said the “possibility of chaos” in Venezuela could adequately spur an oil rally that the most recent global production cuts have failed to achieve. Despite the Organization of Petroleum Exporting Countries’ (OPEC) December agreement to trim output in an effort lift prices, crude fell more than 14 percent in the first six months of 2017 and is currently underperforming its price action of the past four years.

Venezuela’s vote this weekend, followed closely by fresh U.S. Treasury Department sanctions, could be the “only true element that would change the dynamic for crude,” Kloza says.

On Tuesday, oil jumped 3.34 percent, its biggest one-day gain since November 2016. And with only one more trading day left in July, the commodity is on track to have its first positive month since February.

But don’t expect domestic output to slacken anytime soon. In its Short-Term Energy Outlook, released this week, the EIA forecasts crude production to reach a record high of 9.9 million barrels a day on average in 2018. That would push it over the previous record of 9.6 million barrels a day, set way back in 1970. 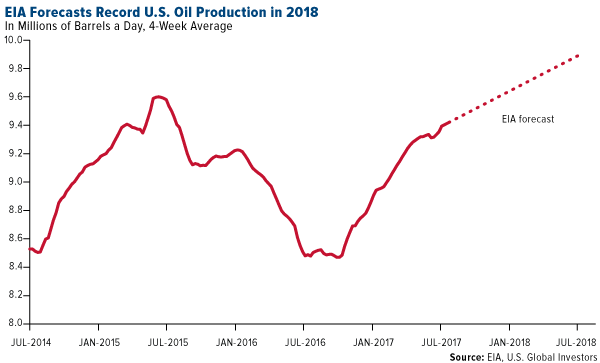 It’s important to remember, though, that a common theme among American frackers is that operations have become exceedingly more efficient than ever before. When oil prices collapsed more than two years ago and rigs were mothballed, output remained strong. So it’s possible that even with fewer rigs actively pumping crude, and less capital going into mining structures, we could still see domestic production reach 10 million barrels a day by next year.

Obstructing price appreciation right now is news that a number of OPEC countries are not complying with production guidance laid out earlier in the year. The compliance rate fell from 95 percent in May to a six-month low of 78 percent in June, with monthly output from Algeria, Ecuador, Gabon, Iraq, the United Arab Emirates and Venezuela totaling more than what should be allowed.

Meanwhile, Libya and Nigeria—which are exempt from the OPEC agreement because recent political instability in those countries knocked out months’ worth of production—dramatically increased output that reportedly has Saudi Arabia worried.

Looking ahead on the demand side, we could see global oil consumption peak as soon as the late 2020s or early 2030s.

That’s according to Ben van Beurden, CEO of Royal Dutch Shell. Speaking to CNBC yesterday, van Beurden cited growth in electric vehicle sales as well as countries switching from fossil fuels to renewables as major catalysts that would trigger peak demand much sooner than previous estimates. Back in November, the International Energy Agency (IEA) said it didn’t expect demand to peak before 2040.

But things are changing more rapidly every day. Last month, Volkswagen—the world’s number one manufacturer by sales—announced it would cease selling fossil fuel-burning automobiles by 2020. Both France and the United Kingdom recently said gas and diesel cars would be banned by 2040. India, the fastest growing automobile market, set a similar target for 2030.

Even when oil demand peaks—whether in 2030 or 2040—it won’t “go out of fashion overnight,” van Beurden said. Planes, ships and heavy trucks will continue using fossil fuels all around the globe, and smaller emerging markets will not be able to make the transition to renewables so easily as larger economies such as Western Europe, China and India.

“Supply will shrink faster than demand can shrink,” he explained, “and therefore, working on oil and gas projects will remain relevant for many decades to come.”

Shell reported knockout second-quarter earnings as cash generation rose sharply. The Anglo-Dutch producer’s earnings attributable to shareholders rose to $1.9 billion in the June quarter, a whopping 703 percent increase over the same period last year. Free cash flow stood at an incredible $12.1 billion, up from negative $3.1 billion during the same quarter in 2016.

With the price of oil having averaged $45 a barrel for the past two years, Shell will remain “very disciplined” going forward, van Beurden said.

Explore investment opportunities in natural resources, including materials and energy! This week spot gold closed at $1,269.93, up $14.88 per ounce, or 1.19 percent. Gold stocks, as measured by the NYSE Arca Gold Miners Index, ended the week higher by 2.02 percent. Junior-tiered stocks underperformed seniors for the week, as the S&P/TSX Venture Index rose just 1.53 percent. The U.S. Trade-Weighted Dollar Index continued lower this week by 0.59 percent.