by Carl R. Tannenbaum, Asha Bangalore, Ankit Mital of Northern Trust, 7/22/17
SUMMARY
The first computer I ever used was a monster. I have no idea how they got the device up to the second floor of my grade school (which was more than 80 years old and had no elevator), and the lights in the library flickered every time we turned the thing on. To bring the machine to life, we had to dial a number on an adjacent telephone, wait for a tone, and then plunge the receiver into a set of suction cups.


Interestingly, the first thing I ever did on that contraption was play Mancala, a game invented by Bedouins thousands of years ago using sand pits and stones. The computer defeated me the first few times, but then I began to recognize patterns in its play that made its moves easy to anticipate. After I began to beat it consistently, I rapidly lost interest because the opponent was overly robotic.

That vintage computer seems as primitive today as the idea of playing games in the sand was back in the 1970s. Computers have become much more powerful, and they are able to learn from their experiences; today’s software plays chess and Gomoku better than top grandmasters. With artificial intelligence now trained on more commercial applications, many are wondering what other things machines might eventually do better than people. And that prospect is creating economic unease around the world.

The transition from man to machine is a long-running industrial theme. Two hundred years ago, steam-powered mills began replacing human weavers (prompting destructive retaliation from the Luddites). In the 1800s, the advent of automated reapers disrupted agriculture. In the last century, robots took deep root on the factory floor. And, most recently, the internet has deeply diminished the need for transaction agents like travel consultants, bank tellers and retailers. 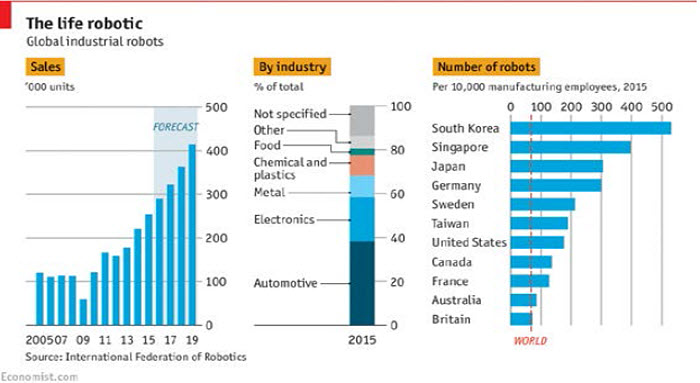 Despite the inexorable march of innovation, employment has continued upward. When change occurs, it is fairly easy to identify the jobs that might be at risk but more difficult to identify the ones that will arise to take their places. But those new opportunities have always appeared, and market economies adapt to embrace them. Thirty years ago, few would have foreseen that thousands of people would be working in cybersecurity, genetic medicine or driverless logistics. But all are growth fields today.

Economic theory also suggests workers should welcome technological advances, not fear them. Anything that makes labor more productive raises its value, which generally results in better pay, more leisure time, or both. At a time when global productivity growth has been slow, the press for additional efficiency should be seen as a good thing.

Further, the developed world has a demographic problem. Postwar generations are transitioning into retirement, birth rates are low and global attitudes towards immigration are under review. With labor force growth slowing to a crawl, advancing the use of robotics would seem to be an elegant solution. The example of long-haul logistics is often cited here: driverless transportation could compensate for substantial impending retirements from the ranks of truck drivers and train engineers.

Nonetheless, there seems to be significant apprehension about current advances in automation. The science seems to be moving ahead rapidly, transforming work across a broad range of industries. The race to disrupt has captured the imagination of venture capitalists, but strikes fear into the hearts of the masses.

It has been traditionally assumed that human beings would transition from repetitive work to more cerebral work as robotics took deeper root. Programmers would provide instructions to the machines, technicians would monitor their performance, and analysts would interpret the immense amounts of data collected in the process.

But advances in artificial intelligence have enabled machines to analyze outcomes and direct their own actions. Interestingly, the programming for driverless vehicles is largely being done by neural networks, which can digest more data more rapidly than people can. Extrapolating on these developments, observers have created lists of jobs that will become obsolete (in whole, or in part) in the coming decades. 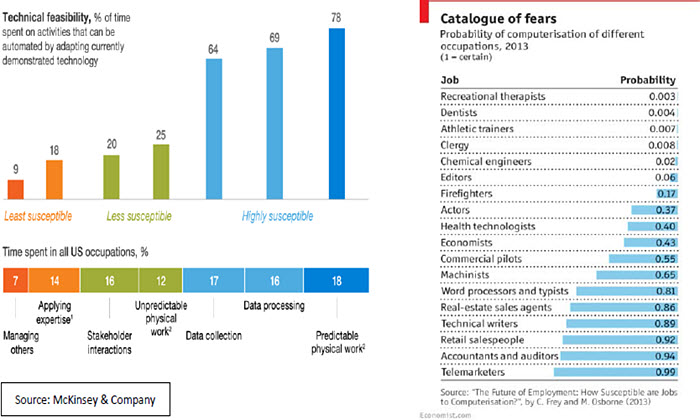 On the roster are a number of vocations that have traditionally provided stable, well-compensated employment to millions of people. As a result, professionals across a wide range of “white collar” fields (including finance) are feeling vulnerable. When you add more basic occupations (like retail) that are seeing roles disappear at a frightening rate, you have the makings of broad-based anxiety. And this feeling can affect what people do within polling places.

While today’s threats seem pressing and proximate, it could be many years (or even decades) before we see broad-based worker displacement. New concepts require long periods of testing before they are ready for mass implementation. Some may prove too costly, while others may be hindered by social or regulatory restrictions.

To assuage concerns, some have proposed placing a tax on robots, and potentially using the proceeds to fund universal basic income for citizens. But history suggests that it is better to embrace progress than hinder it. There is certainly more work to do in many societies to sustain equality of opportunity, but few would recommend a policy of banning backhoes so that people can go back to digging foundations with shovels.

Nonetheless, I am hedging my bets. Futurists suggest there is a 50% chance that economists will be superseded by computers, but less than a 1% chance that dentists will. Goodbye, Keynes, hello, cavities.

The U.S. Senate failed this week in its efforts to repeal-and-replace the Affordable Care Act (ACA), known colloquially as Obamacare. While the outcome was not a surprise, it raises the level of fiscal risk in Washington.

Arriving at acceptable parameters for ACA reform was always going to be a challenge. There is a clear tradeoff between saving money and sustaining the quality and scope of medical coverage offered under the program. There is a broad range of opinion across the U.S. Congress on how to balance the two objectives, including quite a spectrum within the Republican Party. In the end, the distance between factions proved too wide to span.

The Congressional leadership was hoping for a better outcome so that it could begin delivering on promises made during the campaign. But ACA reform was critical on another front. Any cost savings achieved could have been factored into the foundation of the 2018 Federal budgeting process, which will be getting underway soon. Lower projected deficits to start with would have allowed room for steeper tax cuts going forward. With ACA repeal/replace unsuccessful, there is less room to maneuver.

Some have suggested that tax reform should be easier than ACA reform, given greater support in Congress and among the public for change. But to us, that seems like folly.

Firstly, there is little consensus among Washington’s leaders on the proper structure for tax reform. The House of Representatives has been developing its plan for some time under the direction of Ways and Means Committee Chairman Kevin Brady. But the White House has its own outline, which differs in many important ways. And as we learned from the ACA debate, the Senate has its own views.

Secondly, objective scoring of the various tax-cutting proposals has found they would add substantially to Federal deficits and debt. (As we discussed last January, scoring is the arcane science of determining how fiscal proposals affect government revenues and expenses.) The Administration has offered its own projections, but the assumptions used in the analysis have been deemed overly generous by most observers.

Lower taxes can promote incremental economic activity, although the size of the boost to growth is the subject of some debate. But in a recent University of Chicago survey, just 5% of those polled thought that tax cuts would pay for themselves and leave a neutral impact on the national budget. 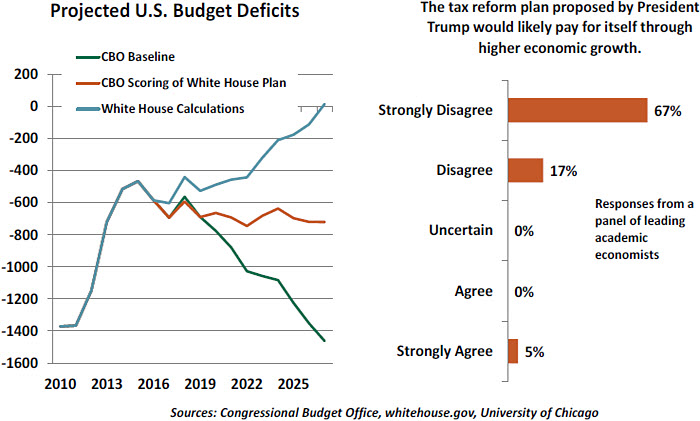 Deficit discipline has been a focal point for many in Congress, including the vocal “Freedom Caucus.” Offsetting the cost of tax reform will require tackling sacred cows such as Medicare, Medicaid, Social Security and defense. With mid-term election campaigns already developing, representatives may be loath to step on what some
have called the third rail of American politics.

Finally, reform of the tax code will create a broad array of winners and losers, and the potential losers will be lined up in the hallways of the Capitol to press their cases. Tax simplification for American corporations aims to lower marginal rates, but it will raise effective rates for some companies by eliminating deductions. The latter group will not be pleased.

On the individual side, people tend to have deep affection for their favorite tax deductions and the industries that benefit from them (like housing) are deeply vested in their preservation. And much as they might rail at the complexity of the code, members of Congress actually like to use tax preferences to curry favor with their constituents.

Expecting these legislative frictions, we declined to include any fiscal stimulus in our forecasts. The U.S. economy has been moving ahead reasonably well without the additional help.

But there may be trouble on the horizon. When Congress returns from its month long summer recess after Labor Day, the weather will be cooling and the debt ceiling drama will be heating up. Given this week’s events in Washington, the odds of a bad outcome are rising.

Most central banks in developed markets have turned decidedly hawkish recently. The U.S. Federal Reserve is more than a year into its hiking cycle, the Bank of Canada raised rates last week and Australia and Sweden are likely to follow suit soon.

Curiously, all this tightening would happen even as inflation remains below target in these economies. The current condition raises questions about the inflation-targeting regimes that have become so popular over the past 25 years.

We have noted how the wage-employment relationship has weakened over the last few years. The latter is described by the Phillips Curve, and this concept gives central bankers confidence in predicting that inflation will advance towards its targeted level as joblessness falls. But the absence of wage pressures despite very low levels of unemployment in many countries raises questions about this anticipation.

It has been argued that the Philips Curve is not really broken, but that slack is being underestimated (due to low labor force participation rates and prevalence of part-time work). In his recent speech at the recent Sintra Forum, ECB President Mario Draghi added that wage-setting behavior continues to be colored by the after-effects of the financial crisis.

Some policy makers and commentators have suggested that raising the inflation target might help anchor inflation expectations at a higher level and translate into higher current inflation. But as Mr. Draghi noted in his Thursday press conference, raising a target when you are struggling to meet the current one might not be seen as credible.

The shift in the tone of policymakers suggests they may be drifting from a strict adherence to their inflation targets. It might be that they are beginning to recognize that the Phillips Curve is irretrievably broken, and that pushing ever harder toward an unattainable objective raises the risk of financial excess. It may be an exaggeration to say that inflation targeting is in decline. But central banks may be placing more emphasis on other objectives in the months ahead.