by Carl R. Tannenbaum, Asha Bangalore, Ankit Mital of Northern Trust, 7/14/17
SUMMARY
Veteran business travelers have a repertoire of tricks to make trips more manageable. We know which airport security gates have the shortest lines, which seats provide the best access to bin space and how to get a nice room at a hotel. (Tell the desk attendant that you are a sleepwalker and need lots of space to wander in the middle of the night.)


My recent trip to Europe added several degrees of difficulty to the trials of travel. The voyage covered three-and-a-half weeks and six cities, so sustaining an adequate supply of clean clothes was not easy. And when my family members joined me for the final segments, their relative inexperience with the rules of the road created additional complications. (Like using limited French to negotiate separate beds for two collegiate children.

It was a very good time to be in Europe, where sentiment has been rising and markets have been outperforming. I found both developments to be well-justified. 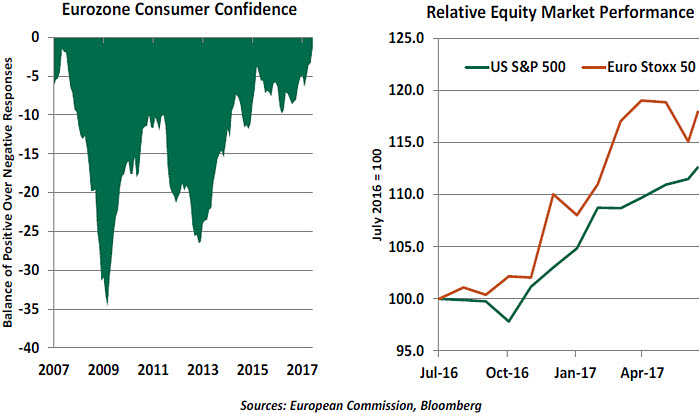 As we discussed last month, Europe’s economic recovery and the profitability of its major companies have lagged other markets substantially during the past nine years. To an optimist, though, this leaves upside potential that may not exist in other developed markets. Unemployment has significant room to decline, consumption has significant room to increase and businesses have significant opportunity to add to capacity.

Entering 2017, the potential for anti-European Union (EU) forces to gain ground in spring elections was a distinct downside risk. But Emmanuel Macron’s victory in France seems to have changed the tone in Europe by 180 degrees. Macron’s rise has been meteoric. A relative unknown a year ago, he was elected president of France only two months ago and is now viewed as one of the most dynamic leaders in the world. He has forged an early, strong alliance with Chancellor Angela Merkel of Germany, bringing the eurozone’s two central countries into close alignment. This raises prospects of solving some of the continent’s lingering problems with continental coordination.

First, however, Macron must address issues at home. France is not the most dynamic economy in the world, given its myriad limitations on labor markets. Allowing more flexibility to hire and fire, extending the retirement age and lengthening the standard 35-hour work week are seen as essential steps to unlocking France’s economic potential. These strictures have denied many young French professionals access to full time employment and forced them to work on contracts.

Macron has initiated pursuit of reforms with France’s labor unions, which are tremendously influential to the economy. (Interestingly, union membership in France is lower than that of the United States, but union delegates in France serve on workplace councils that govern a broad range of business practices.) So far, the discussions have been cordial. But one union leader compared a longer work week to “treason against the Republic.” An accusation of that kind during the French Revolution might have caused the target to become… lightheaded.

The view from Paris is that Macron will have to capitalize quickly on his popularity. He has a working majority in the French legislature, but many of the newly elected deputies have little political experience. Domestic progress will be an essential foundation for Macron to achieve the international leadership many hope for.

Perhaps Macron can convince Ms. Merkel to creative incentives for additional German consumer spending, which would accrue to the benefit of the remainder of Europe. Perhaps he can help find a solution to Europe’s migration crisis that is sensible, humane and sensitive to Europe’s demographic needs (see chart below). Perhaps he can set the tone for successful negotiations on a new relationship between the United Kingdom and the EU. 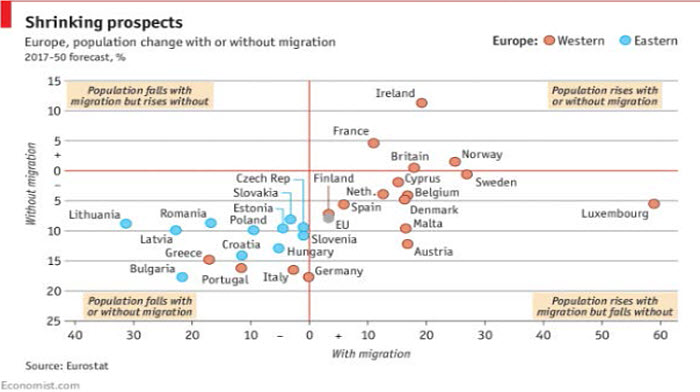 That is an awful lot to ask of such a callow politician. But should he succeed at all levels, the Economist article depicting him walking on water might not be such hyperbole. The sense of possibility in Europe is the strongest I’ve felt in many years.

Across the waters of the English Channel, the mood is considerably more apprehensive. Theresa May, the British leader, sank in the most recent election and barely held onto her position. She will be forced to steer toward a softer Brexit (a good thing) but with a much weaker mandate (a bad thing). The uncertainty is apparent in British economic performance and monetary policy, which is diminishing the attraction of U.K. markets.

We still think a productive relationship between the U.K. and the EU can be sustained. But the situation may get worse before it gets better.

The distance of 4,000 miles was not enough to escape questions about the United States. Europeans sense a lack of interest from the White House in international cooperation that extends from trade to defense to climate change. The absence of leadership from Washington in all of these areas was a significant source of concern in each of the cities I visited during the trip.

I also fielded many questions about the increasing dysfunction in the U.S. Congress and the unwillingness of American legislators to deal with a dire long-term budget outlook. The justification for U.S. asset prices was seen as somewhat shaky. In the eyes of the rest of the world, we clearly have room for improvement.

I have two months before my next international trip; hopefully, that will be enough for America to clean up its act. Or, at very least, enough for me to clean all of my dirty laundry.

So Close, and Yet So Far

The minutes of the June Federal Open Market Committee meeting noted the Fed’s concerns about persistently low inflation. However, these concerns were largely dismissed as stemming from transitory factors. But there may be more brewing underneath the headline numbers, which implies that inflation readings may take some time to reach the Fed’s target.

The overall and core personal consumption (PCE) price indices increased 1.4% for the 12 months ending in May. In January, core inflation as captured by this metric was running at a 1.8% year-over-year pace. This sort of inflation reversal is very unusual in a fully employed economy.

In January 2017, the U.S. Bureau of Labor Statistics (BLS) introduced methodological changes to the assessment of cell phone service costs. This component is only about 1% of the core PCE price index, but the resulting 7% drop in the measured price of cell phone services ultimately led to a 0.1% reduction in year-over-year inflation. The BLS does not undertake methodological changes frequently, so the impact of this new measurement approach should wear off in the months ahead.

Fed Chair Janet Yellen also suggested that a temporary moderation in prescription drug price increases–believed to be caused by recent launches of generic medication—contributed to benign inflation readings during the last three months. Prescription drugs account for roughly 4% of core PCE, and by its nature, this moderation is also unlikely to recur.

At her semi-annual Congressional testimony this week, Yellen indicated that “part of the weakness in inflation reflects transitory factors, but well recognize that inflation has been running under our 2 percent objective, that there could be more going on there.”

There is certainly more going on. The contained inflation trend involves more than these two special factors. Goods make up about a third of total U.S. consumer spending. The year-over-year change in goods prices excluding food and energy items has held below zero for several months. Clothing prices have fallen due to significant global competition. Lower prices for automobiles are consistent with the reduction in demand for vehicles and an increase in the inventory of unsold used cars. Both of these trends have the potential to be considerably longer-lasting than the situations with cell phones and prescriptions. 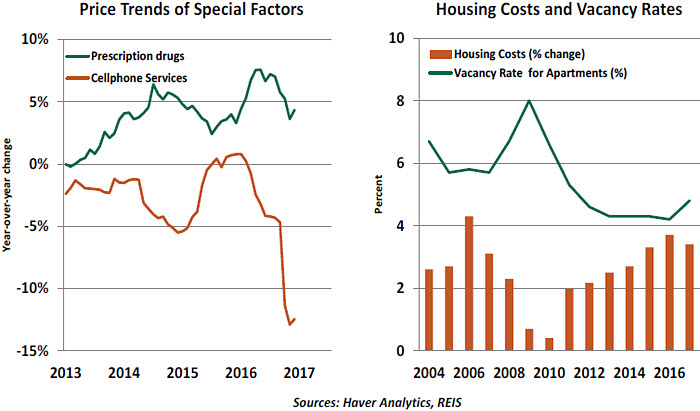 Services account for two-thirds of the personal consumption price index. Shelter is, by far, the most significant component here, accounting for about 18% of the PCE deflator. Shelter costs grew by 2.7% on a three-month annualized basis in May, after advancing by close to 4.0% in the latter part of 2016. This has placed significant downward pressure on the rate of increase in the price level.

On the supply side of the housing market, construction began on a large number of apartment buildings in 2015 and 2016 in light of favorable demand conditions. The completion of these buildings has resulted in a lower vacancy rate, which is projected to move up further in the quarters ahead. Asking rents are consequently expected to moderate even further. The importance of shelter costs in core inflation suggests further declines will move the year-over-year change in the price level even further from the Fed’s target.

The recent reversion of inflation will certainly complicate monetary policy deliberations in the months ahead. Chair Yellen continued to signal her intention to reduce the Fed’s balance sheet and continue normalizing interest rates, but the basis for these actions seems less firm that it was earlier in the year. Market participants will be seeking firm guidance to clear the cloud hanging over U.S. inflation at this late stage of the business cycle.

Wonderment about the decline of the Phillips curve is an international obsession. Japan presents a particularly challenging puzzle for policy makers: Japan’s labor market appears to be getting tighter by the month, but Japanese workers don’t seem to be getting much in the way of pay hikes. Even as unemployment is at a multi-decade low of just 3.1% and reports of worker shortages abound, average wage growth remains almost non-existent on a real basis.

The BoJ also blames the lack of labor mobility, and therefore lack of competition for workers, for holding back wage increases. This is where structural reforms can help, by both increasing labor mobility and by leaning on industry leadership to revise wage setting norms. Changes of this kind were proposed in the “third arrow” of the Japanese government’s 2012 reform program, but they have yet to progress.

But there must be something more going on. Surely, firms should be able to fill open positions by raising salaries. Wage setting norms also evolve with a changing macroeconomic environment without needing a nudge from the government; rewriting contracts to include “look-back” clauses could better reward workers with true options to go elsewhere.

The composition of Japanese employment is another important factor in the wage picture. Almost a quarter (22.7%) of the Japanese work force is employed on a part-time basis. (This is just a fraction below that of the United Kingdom, another major economy with a seemingly tight labor market and low wage growth.) Part-time workers are counted as being employed, but they have capacity to work further without stressing their salaries.

The prevalence of part-time work also explains the paradoxical coexistence of lower than average hours worked in Japan (1719 annual hours versus an Organization for Economic Cooperation and Development average of 1766) alongside a culture of long working hours – something that has recently attracted a government crackdown. The Japanese labor force participation rate, especially among women, has also been increasing steadily, which also keeps wage increases in check.

While low wage growth is undesirable in itself, it also inhibits the BoJ’s ability to generate inflation. Considerable fiscal and monetary stimulus has been aimed at defeating the deflation that has plagued Japan for many years. What the wage dynamic illustrates, however, is that victory may hinge more on structural battles. Maybe it is time to put the third arrow back into the quiver.