“Active funds are now 71% overweight in the FANG companies after making the biggest move from value to growth since 2008.”

Andrew and I have been traveling a lot recently and are getting the same question from both individual investors and professional investors. The question goes something like this: “The 10 largest market capitalization stocks are ‘driving’ the overall stock market’s performance. For those of us old enough to remember, it is very reminiscent of the nifty-fifty phase of an era gone by. That nifty-fifty craze did not end well, so can it be any different this time, especially given the current lofty valuation levels?” Speaking to this point is Strategas’ Chris Verrone writes, “The combined weight of the 10 largest in the S&P 500 is only 19%, still below the long-term average (20%) and not even in the ballpark of what we saw in 1999 (27%).”

Concentration was an American television game show based on the children’s memory game of the same name. Matching cards represented prizes that contestants could win. As matching pairs of cards were gradually removed from the board, it would slowly reveal elements of a rebus puzzle that contestants had to solve to win a match (Concentration). In this case, however, we are not referring to the game show, but rather, the ubiquitous notion that, “The 10 largest market capitalization stocks are ‘driving’ the overall stock market’s performance.” We have often addressed this “concentration” point, most recently in the last two weeks. Piqued by our comments, the uber smart Lawrence Hamtil (Fortune Financial Advisors LLC) pinged me and we began an exchange of emails on the subject. In one of those emails, Lawrence included an article he recently scribed and gave me permission to reproduce it in one of these missives. The individual stock names in his article have been removed because, under the new Department of Labor regulations (The DOL Rule) evidentially we cannot mention any stocks in these reports. Here’s what Lawrence wrote:

In "Relative Equity Valuations, Diversification, and Creative Destruction," I argued that one of the main attributes of the U.S. equity market, - one that warrants it a premium to other global markets, - is its dynamism, which almost ensures that the leadership of the market, whether by sector, industry, or company, is constantly changing. The practical effect of this is that investors in U.S. equities, unlike most of their foreign counterparts, are not relying on the same handful of companies that have dominated other markets for years, if not generations. An additional result of this innate market dynamism is that the ability of only a few giant companies to dominate the market is checked by the creative destruction that serves as a kind of automatic rebalancing mechanism for the market.

To follow up on that theme, I wanted to share a few data points that illustrate that even though the feeling is that the U.S. market (as gauged by the S&P 500 index) is currently dominated by several megacaps the reality is that the current market weightings are fairly average, and perhaps even less top-heavy than it has been in the recent past.

This seems fairly concentrated at the top until it is revealed that from 1980 through 2014 (the latest for which I have data), the average weighting of the top ten S&P 500 components was about 20.5%. The current structure is nothing remarkable: 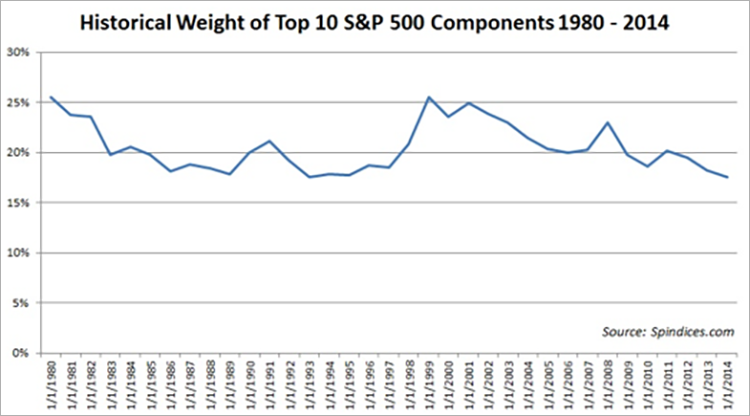 Five Steps to Get Back an Ex-Client Who Dumped You

The Formula to Catch Leads

Interest Rates and Their Impact On Stock Values