The United Kingdom Faces a Rising Degree of Difficulty

by Carl R. Tannenbaum, Asha Bangalore, Ankit Mital of Northern Trust, 6/17/17
SUMMARY
For the second year running, a British Prime Minister has taken an electoral gamble that has backfired. We are left with more questions than answers: what will British leadership look like in six weeks or six months’ time? Do voters prefer a so-called “Soft Brexit” or a “Hard Brexit”? Will negotiations with the European Union (EU) start on time, and end on time? With the U.K. economy faltering, resolution on these fronts must come quickly.


When the election results came out last Thursday, Prime Minister Theresa May’s position looked untenable. But potential challengers have kept their knives sheathed. After securing the backing of Tory backbenchers (the 1922 Committee) in a highly choreographed meeting, it looks like she may survive for the time being.

This outcome seems to reflect the reality that Brexit has made the Prime Minister’s job a poisoned chalice. Prospective aspirants to 10 Downing Street are letting the incumbent take the blame for Brexit’s inevitable economic damage (or an inability to regain sovereignty from Europe), and living to fight another day. Predicting British politics these days is a fool’s errand, but the prospect of May surviving at least until 2019 (when the United Kingdom leaves the EU) is not as outlandish as it appeared last week.

The new make-up of Westminster Palace is not without silver linings. Tory gains in Scotland have taken the threat of another Scottish independence referendum off the table. Further, a minority Tory government reliant on the support of Irish Democratic Unionist Party is expected to be a more level headed negotiator with the European Union. Securing a frictionless border between Northern Ireland and the Republic of Ireland would now be a matter of political survival for the government. This, along with the reality check delivered by the voters, should end the bravado of a “no-deal” Brexit.

Some observers are now expecting a softer outcome, but that will be an exceptionally challenging outcome to reach. Retaining the benefits of membership in the single market inevitably means that the United Kingdom would continue to allow free movement of people with the EU and that the EU would retain a heavy hand in setting U.K. regulations. This not only makes leaving the EU pointless, but would be politically impossible to sell since the Brexit referendum was won on concerns over immigration and sovereignty.

With negotiations soon to get underway, the focus will be on agreeing to the terms of exit from the EU, securing a transition agreement for the United Kingdom and establishing the United Kingdom’s future trading status with the remaining EU members. Time is of the essence here — not only does everything need to be negotiated by March 2019, but it also has to be ratified by 27 parliaments.

The first phase of negotiations will aim to reach a decision on immigrant rights and resolve the United Kingdom’s obligations to the EU budget as it makes its transition (the so-called Brexit bill). While the British government has been defiant on the Brexit bill, and noncommittal on the rights of EU citizens in the United Kingdom, London would gain both time and goodwill for its post-Brexit demands if it displays generosity here. 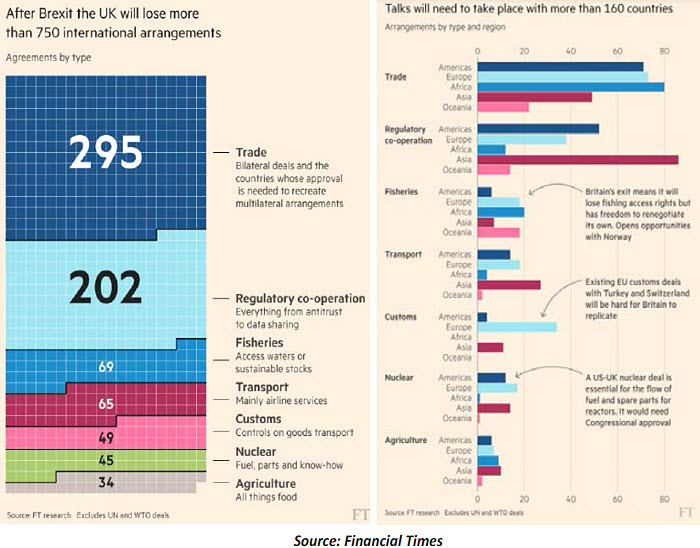 Finally, market indications of Fed policy and inflation expectations must be taken cautiously. Treasury securities are an international asset class, and the past two decades have seen a massive influx of foreign buyers to the market for U.S. government debt. Recent reports indicate that China (among others) has been more active in purchasing U.S. government securities, despite the Fed’s outlook.

These investors are certainly looking for good returns, but they may also be trying to achieve better currency diversification and hold assets in a market which is the most liquid in the world. All of this is to say that the market prices that are used to make inference about monetary policy may not be providing the purest readings, and the apparent dissonance between markets and the Fed may be something of an exaggeration.

The Fed is certainly not infallible, which is why policy has proceeded cautiously. But markets are certainly not omniscient, either. Each party will need to watch incoming data over the next few months and recalibrate expectations.

Indexes tracking market volatility and policy uncertainty have diverged, a change from historical patterns. Observers are actively debating which of these two signals best captures the current circumstance.

Two political events led to an increase in economic policy uncertainty in 2016 – the Brexit vote and the U.S. presidential elections. This can be seen in the Global Economic Policy Uncertainty Index (GEPUI), which is a gross domestic product-weighted average of national indexes for 18 countries. The GEPUI reflects the frequency of newspaper articles, in the respective countries, containing terms pertaining to the economy, policy and uncertainty. The GEPUI rose sharply last June and last November, and continues to hover at an elevated level.

The GEPUI and the VIX, the ticker for the Chicago Board Options Exchange Volatility Index, have historically tracked very closely, but have gone their separate ways in recent months. The VIX is a measure of market expectations of near-term volatility as suggested by S&P 500 stock index option prices; it is viewed as a gauge of investor sentiment.

The VIX has been remarkably sedate, even as U.S. equities have reached a series of new highs. Both developments are somewhat at odds with the more alarming signal from the GEPUI. The European Central Bank produced some research about the reasons for the divergence, suggesting that policy reactions have played a role in holding down the VIX even as uncertainty indices continue to rise. But it is not clear why policy actions began to have an asymmetric impact on the two last year, after affecting them similarly in years prior.