We Should Be Giving More Credit to Students, Not Less

Both Asha and I are celebrating graduations this month. Congratulations to Jason, Veronica, and the class of 2017!

Seniors and their families approach this milestone with a mix of pride and trepidation. Pride arises from the achievement of heightened status within the community of educated women and men. But there is trepidation about what lies ahead at the next level.

The transition anxiety is compounded by the challenge of financing higher education in America. Many of those who will be matriculating to college are soon to begin accumulating student loans. Many completing college will soon have to start paying off those loans. The amounts involved have grown substantially in the last decade, burdening young professionals.

Some have suggested that U.S. student debt is a $1.4 trillion problem that cries out for restriction and reform. But in the current environment, it is hard to argue for lower levels of investment in human capital. Financial support for students is a problem, all right—in that there isn’t enough of it.

Student loans have grown by more than three times during the past decade, while overall consumer credit has moderated. 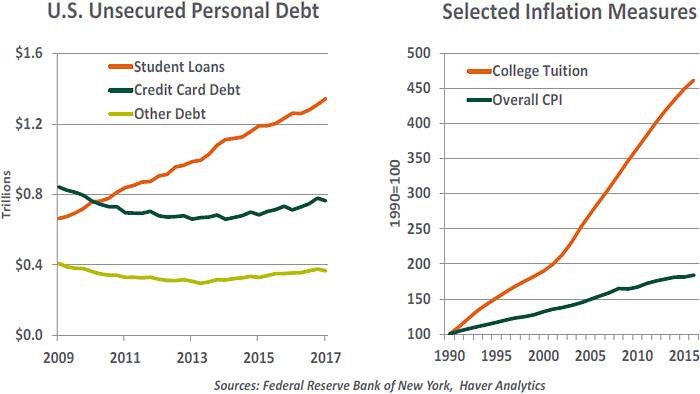 Rising college costs are the main contributor to this trend. Tuition and related expenses have grown by more than twice the rate of consumer inflation since 1990. Demand has been higher, as the children of baby boomers form the largest high school graduating classes in American history. Adding to this has been the influx of foreign students attending college in the United States, whose numbers topped one million last year. And an increasing number of adults have returned to school since the 2008 recession, seeking to improve their skill sets.