Trump Bids Adieu to Paris Climate Agreement. What Does this Mean for Energy Investors? Surprising no one, President Donald Trump announced his decision to withdraw the U.S. from the Paris climate agreement this week, highlighting the depth of his commitment to keep “America First.” Also surprising no one, the media is making much of the fact that the U.S. now joins only Nicaragua and Syria in refusing to participate in the accord.

Trump was under intense pressure from business leaders, politicians on both sides of the aisle, environmental activists, members of his Cabinet—even his own daughter Ivanka, reportedly—to stay in the agreement, but he made his decision with the American worker in mind. The Paris accord, Trump said, “is simply the latest example of Washington entering into an agreement that disadvantages the United States,” leaving American workers and taxpayers “to absorb the cost in terms of lost jobs, lower wages, shuttered factories and vastly demised economic production.”

This is the assessment of Secretary of Commerce Wilbur Ross, who went on Fox News to defend the decision. “Any time that people are taking money out of your pocket and you make them put it back in, they’re not going to be happy,” Ross said, making a similar argument to the one that prompted the Brexit referendum last year.

Just as many Brits were tired of following rules passed down from unelected officials in Brussels, many Americans have feared the encroachment of global environmentalists’ socialist agenda, which they believe threatens to usurp their freedom.

A thought-provoking article from FiveThirtyEight outlines how climate science became a partisan issue over the last 30 years in the U.S. It was the fall of the Soviet Union in the early 1990s, the article argues, that brought on a significant partisan shift in attitude, with conservative thinkers beginning to see the regulations that went along with environmentalism as the new scourge.

No, the Sky Isn’t Falling

Despite the withdrawal, I believe that the U.S. will not stop innovating and being a world leader in renewable energy—even while oil and natural gas production continues to surge. As the president himself said, we will still “be the cleanest and most environmentally friendly country on Earth.”

Last week I shared with you that we’re seeing record renewable capacity growth here in the U.S., with solar ranking as the number one source of net new electric generating capacity in 2016. In the first quarter of 2017, wind capacity grew at an impressive 385 percent over the same period last year. The “clean electricity” sector now employs more people in the U.S. than fossil fuel electricity generation, according to the 2017 Energy and Employment Report.

This was all accomplished not because of an international agreement but because independent communities, markets and corporations demanded it. Solar and wind turbine manufacturers will likely continue to perform well in the long term as renewable energy costs decline and battery technology improves. Clearly people’s attitudes toward climate change—and its impact on business operations—are changing. This week, Exxon Mobil shareholders voted to require the company to disclose more information about how climate change and environmental regulations might affect its global oil operations. The energy giant—along with its former CEO, Secretary of State Rex Tillerson—favored staying in the climate deal.

At the same time, markets reacted positively to the exit, with the S&P 500 Index, Dow Jones Industrial Average and NASDAQ Composite Index all closing at record highs on Thursday following Trump’s announcement. 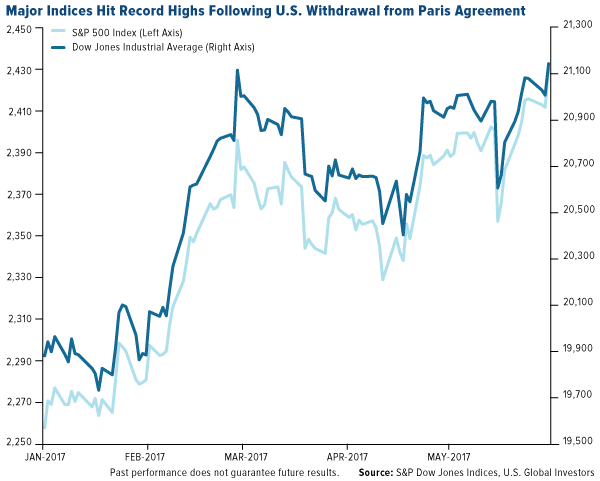 So What Does This Mean?

The question now is what investment implications, if any, the withdrawal might trigger.

The short answer is no one knows exactly what happens now. There’s already speculation that some countries might act to raise “carbon tariffs” on U.S. exports, increasing the cost of American-made goods “to offset the fact that U.S. manufacturers could make products more cheaply because they would not have to abide by Paris climate goals,” according to Politico. German chancellor candidate Martin Schulz has said that, should he be elected in September, he would refuse to “engage with the U.S. in transatlantic trade talks.” Schulz’s comments are not that far removed from those of his political rival, incumbent Angela Merkel, who called Trump’s decision “extremely regrettable.”

This has the potential to widen the rift that’s been forming between the U.S. and Germany since Trump took office. Recall that Trump refused to shake Merkel’s hand during her Washington visit in March. More recently, the president reportedly called the Germans “bad, very bad,” adding that he would stop them from selling millions of cars in the U.S.

One of the biggest winners of the withdrawal could be China. Just as the Asian giant is poised to benefit from the U.S. distancing itself from multilateral free-trade agreements such as NAFTA and the Trans-Pacific Partnership (TPP), it’s also in a position to brand itself as the world’s leader in renewable energy. Just today, Chinese Premiere Li Keqiang met with European Union (EU) officials in Brussels to discuss trade between the two world superpowers, but they also took the time to condemn the U.S. president’s actions, with European Council president Donald Tusk saying that the Paris agreement’s mission would continue, “with or without the U.S.”

China might be the largest carbon emitter right now—it overtook the U.S. a decade ago—but it’s also the biggest investor in renewable energy generation, with $361 billion being spent between now and 2020. The country just fired up the world’s largest floating solar power plant in what used to be a coal mine, now flooded. The plant will provide as much as 40 megawatts (MW) of power to Huainan, China, home to more than 2.3 million people.

On the same day President Trump shared his decision, new purchasing manager’s index (PMI) data was released, and just like last month, European manufacturers were the big surprise. The EU manufacturing sector strengthened its expansion for the ninth straight month in May, reaching a 73-month high of 57, right in line with expectations. Jobs growth grew to an incredible 20-year high. Germany led the group with a PMI of 59.5. Of the eight EU countries that are monitored, only Greece fell short of expansion.

The U.S., meanwhile, slipped from 52.8 in April to 52.7 in May, posting the weakest improvement in business conditions in eight months, before the election. China fared even worse, falling from 50.3 to 49.6, signaling a slight deterioration in its manufacturing sector for the first time in almost a year.

In Gold We Trust

With the U.S. dollar taking another hit today on a weaker-than-expected jobs report, gold closed up 1.12 percent today. A Bloomberg gauge of 72 junior miners, however, has lost 15 percent since the end of January, and the rebalance of the VanEck Vectors Junior Gold Miner ETF (GDXJ), which I previously wrote about, is also having a depressing effect on many gold names.

This was a major concern among investors at the International Metal Writers Conference in Vancouver, which I presented at earlier this week. Despite gold gaining 9 percent so far this year, junior gold miners have not followed through with those gains as the GDXJ is set to cut in half its exposure to the junior mining space on June 16.

Other investors aren’t so pessimistic. Every year for the past 11 years, Liechtenstein-based investment firm Incrementum has issued its closely-read “In Gold We Trust” report. The 2017 edition, released yesterday, raises a number of interesting observations that add some shine to gold’s investment case.

For one, its analysts firmly believe that gold’s price turnaround last year “marked the end of the cyclical bear market,” adding that “the rally in the precious metals sector has probably only just begun.” To illustrate this, the group tracked the performance of every gold stock bull market going back to 1942, using the Barron’s Gold Mining Index. The bull market that began last year, highlighted in red below, does indeed look as if it has much more room to run. Among the reasons why “prudent investors” should consider accumulating gold and gold stocks now, according to Incrementum, are excessive global debt, the “gradual reduction of the U.S. dollar’s importance as a global reserve currency” and what the group sees as a high probability that the U.S. is close to entering a recession. Interestingly, the investment firm shows that nearly every U.S. recession, going back 100 years, was preceded by an increase in interest rates.

“The historical evidence is overwhelming,” Incrementum writes. “In the past 100 years, 16 out of 19 rate hike cycles were followed by recessions. Only three cases turned out to be exceptions to the rule”—one in the 1960s, one in the early 80s, the last in the mid-90s.

The U.S., of course, is currently at the start of a new cycle, though the ho-hum jobs report for May—138,000 jobs added, versus expectations for 185,000—casts doubt on a rate hike this month. Nevertheless, Incrementum’s research makes a compelling case that a recession could be imminent, making gold even more attractive as a store of value.

As for gold stocks, Incrementum favors “conservatively managed companies which are not merely pursuing an agenda of growth at any price, but are instead prioritizing shareholder interest.”

This is an apt description of the kinds of gold companies we prefer—frugal, small- to mid-cap names such as Klondex, Wesdome Gold Mines, Kirkland Lake and many others. This week spot gold closed at $1,278.45, up $11.55 per ounce, or 0.91 percent. Gold stocks, as measured by the NYSE Arca Gold Miners Index, ended the week lower by 0.72 percent. Junior-tiered stocks underperformed seniors for the week, as the S&P/TSX Venture Index fell 0.94 percent. The U.S. Trade-Weighted Dollar Index finished the week lower by 0.77 percent