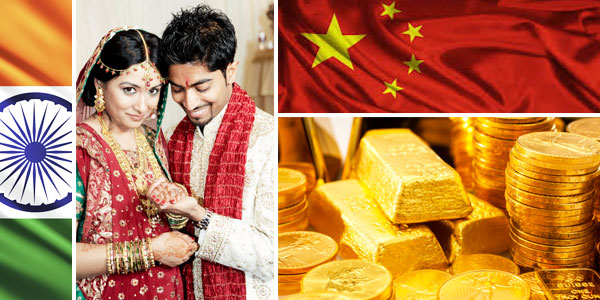 Here at the outset, I want to share with you an interesting observation we made this week of gold’s seasonal trading pattern. As you can see in the chart below, based on data provided by Moore Research Center, the five-year pattern, represented by the orange line, is diverging from the longer-term trends. Note that the index on the left measures the greatest tendency for the asset to make a seasonal high (100) or low (0) at a given time.

The data show that lows are now reached late in the year, not in January (according to the 15-year period, represented by the dark blue line) or August (according to the 30-year pattern, represented by the light blue line). Historically, September has seen the highest returns on gold as Indians make huge purchases in preparation for Diwali and the fourth-quarter wedding season, but lately we’ve seen changes. When we calculate the average monthly returns of the past five years, from January 2012 to December 2016, we find that January is the strongest month, returning 5.3 percent, following by August with 2.3 percent. September actually returns negative 1.3 percent.

There could be a number of reasons why this is, but it’s important to recognize that the five-year period captures the bear market that dragged gold from its high of $1,900 an ounce in August 2011 to a recent low of $1,050 in December 2015. The years 2013, 2014 and 2015 all saw negative returns, so it’s little wonder why the orange line trends down from February-March to December. On numerous occasions I’ve shown that higher inflation supports demand for gold, which has often been seen as a safe haven investment. The money you have sitting in the bank right now is guaranteed to lose value over time. The five-year Treasury bond is currently yielding a negative return. Diversiying a part of your portfolio into gold and gold stocks could help mitigate the effects of inflation on your household wealth. I’ve always recommended a 10 percent weighting with annual rebalances.

Chindia Demand Was Strong in the First Quarter

In India, no one questions this. Aside from property, gold is seen as the most reliable store of value, which is why it’s routinely given as a gift during weddings, graduations, births and other important life events.

Indians’ demand for gold jewelry jumped 16 percent year-over-year in the first quarter, according to the World Gold Council (WGC), as the country slowly recovers from the economic shock of Prime Minister Narendra Modi’s demonetization scheme in November.

Demand in China for gold bars and coins had an unusually strong start to the year, fueled by concerns over a weakening renminbi and uncertainty over the country’s real estate market. The first quarter has historically been a good time for Chinese demand, as that’s when the Lunar New Year falls. This year, though, demand was up an amazing 30 percent, with 105.9 metric tons (tonnes) purchased during the three-month period. According to the WGC, this was the fourth-strongest quarter on record.

Looking ahead, gold prices could be supported by steadily declining mine production. Over the next five to 10 years, output from currently-operational mines is expected to drop off steeply as a consequence of deep spending cuts for project development as well as a lack of significant new deposit discoveries. Between 2012 and 2016, capital expenditure for companies in the NYSE Arca Gold BUGS Index contracted 65 percent, the WGC reports. This will inevitably squeeze the supply chain and help prices firm up.

Stock Investors Have No Fear

In the near term, gold faces a number of headwinds, including a strong U.S. dollar, rising nominal interest rates and a still-robust stock market. Despite recent geopolitical shockwaves such as President Donald Trump’s firing of FBI director James Comey, investors still see stocks as a good place to be, with the CBOE Volatility Index, or VIX, trading at lows last seen in 1993. Popularly known as the “fear gauge,” the VIX measures expected volatility in the S&P 500 Index over the next month. That it’s trading so low suggests that geopolitical uncertainty doesn’t always translate into investor uncertainty. Evidently Wall Street doesn’t share the same sense of impending doom as some voters and media figures appear to have right now concerning Comey’s termination and the ongoing investigation into possible collusion between the Trump campaign and the Russian government.

This matters because gold has historically benefited in times of crisis and uncertainty, whether real or perceived. But with the VIX signaling near-record-low fear in the marketplace, some investors might see this as weakening the case for gold.

Where We See the Gold Opportunities

In this environment, we seek high-quality producers that are profitable and show improvements in revenue and cash flow. This yields junior companies such as Klondex and Wesdome, both of which have demonstrated strong fundamentals, low SG&A (selling, general and administrative expenses), cost-conscientious management and higher-grade ore.

The recent bubble in gold stocks unwound, which was harmful to some quality gold names that were affected by the issues involving the VanEck Vectors Junior Gold Miners ETF (GDXJ), which I wrote about last week. Since the GDXJ methodology update was announced, the ETF has recorded large redemptions, with assets plunging as much as 25 percent.

The GDXJ doesn’t have any smart beta attributes—instead, it relies on market cap. As portfolio manager Ralph Aldis put it, this means “we find a lot of high-quality companies being indiscriminately sold down.” We see this as an opportunity to nibble at some attractive small-cap growth names.

Net debt of my home province, Ontario, has been steadily expanding for years. In 2016, it actually crossed above $300 billion for the first time ever—and this is for a province of only around 14 million people, which is a little more than Pennsylvania.

Led by Premiere Kathleen Wynne of the socialist Liberal Party since 2013, Ontario is addicted to social spending, and its just-released 2017 budget is no exception. Free prescription drugs will now be provided for everyone aged 24 years and under. And for the first time, a guaranteed basic income, with no strings attached, will be handed out every month to people between 18 and 64 who earn less than a given amount. These programs are implemented with admirable motives, but they’re unsustainable.

To be fair, I should point out that Ontario’s 2017 budget is the first in 10 years to be “balanced.” But that doesn’t mean debt is going down any time soon. By the end of the decade, debt is projected to reach $335 billion, or about 40 percent of province GDP. Writing for the Toronto Sun, columnist James Wallace called Wynne’s undisciplined spending glut a “selfish burden on future generations.” I couldn’t agree more. As things stand now, each Ontarian owes more than $22,000 on principal alone, before interest.

We’ve seen it in Venezuela, Chicago and elsewhere—out-of-control socialism weakens economic growth and enslaves taxpayers. I’m sorry to see this happen to the great province I grew up in and still visit multiple times a year.

To show you the difference between that and a truly well-managed jurisdiction, I made the table below comparing Ontario to my present home state of Texas. It’s like night and day!

This Mother’s Day weekend, consumers are expected to spend a record $23.6 billion, up from $21.4 billion last year, according to the National Retail Federation (NRF). Most of the spending will be on jewelry ($5 billion), special outings ($4.2 billion) and flowers ($2.6 billion).

However you plan on celebrating the special mom(s) in your life—whether it’s your own mom, a wife, sister or daughter—make it count. It’s crucial we show gratitude to those charged with the most important task in our society. Have a blessed weekend! This week spot gold closed at $1,228.38, up $6.78 per ounce, or 0.56 percent. Gold stocks, as measured by the NYSE Arca Gold Miners Index, ended the week higher by 5.72 percent. Junior-tiered stocks underperformed seniors for the week, as the S&P/TSX Venture Index climbed just 1.52 percent. The U.S. Trade-Weighted Dollar Index finished the week up 0.54 percent. Are Your Portfolios Ready if US Stocks Underperform?

Understanding Our Dismal Ability to Forecast

The Financial Freedom of Owning Less

Inflation Is Starting to Weigh on Consumer Confidence and Spending

Knowledge Vs. Experience: Why Most Investors Wind Up Losing

H2 2021 Investment Outlook: Return to (Much Closer to) Normal

by Anastasia Amoroso of iCapital Network, 7/19/21

Still No Reason to Panic About Inflation

Three-Question Survey You Must Send to All Prospects

Don’t Let Your Clients Buy Bitcoin (or any other cryptocurrency)

Here’s Why the Yield Curve is Likely to Re-steepen, and What that Means for Stocks