What Does It Mean To “Buy American?”

President Trump issued an executive order recently that advocated a “Buy American” policy. The fundamental assumption behind this directive is that buying only goods produced in the United States will create a multitude of jobs and enhance the country’s prosperity. But while this may sound logical on the surface, the program misunderstands key features of the integrated global economy and the root causes of worker displacement. The imposition of “Buy American” laws will lead to larger government deficits, a distortion of trade flows and higher prices for consumers.

The primary aim of the “Buy American” part of the executive order is to maximize “the use of goods, products and materials produced in the United States.” A number of free trade agreements and the World Trade Organization (WTO) limit the favoring of domestic providers in government contracting, but U.S. officials have been instructed to investigate the latitude available for them to turn inward. A report is due to the President in the fall.

One of the challenges in implanting rules of this kind is determining what qualifies as a domestic product. It is rare indeed to find something that is created exclusively from local content; more commonly, goods are the end result of global value chains (GVCs). GVCs are networks of production stages that span national borders. A GVC involves combining intermediate goods and services into products that are used at a subsequent stage of production. 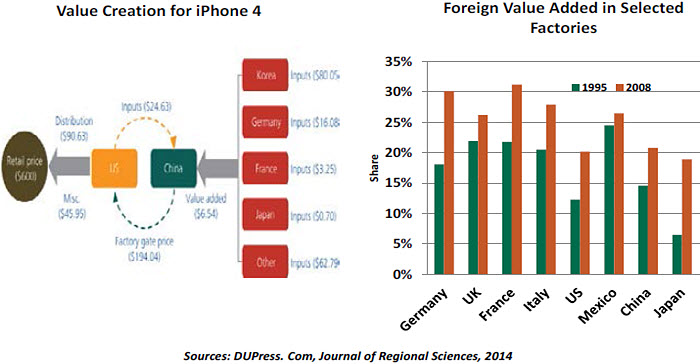 A typical GVC consists of several steps, from conception to assembly to branding and marketing. Organizing production in this manner captures efficiencies from across the world.