Globalization has profoundly affected politics, society and economic performance. Among its most significant results has been persistent downward pressure on prices. As governments across the world consider their participation in free trade, they should appreciate that withdrawal could come at a high cost.

Among the most prominent developments of the last generation has been the taming of inflation in major markets. Monetary policy has often been credited for this; restrictions in money growth and the anchoring of expectations have been widely cited as bringing about this end. But the dominant driver of this outcome may instead have been the integration of national markets into a global marketplace.

A direct and easily measured example comes from trade in goods. Price movements for goods in an exporting nation are echoed in price movements of finished and intermediate goods in an importing nation. This is especially true for globally traded raw materials, where individual countries are often price takers. The chart below shows the growth in the trade of both final and intermediate products, where the blue line represents total trade in finished goods (exports plus imports as a percentage of GDP) and the red line charts the growth of trade in intermediate goods. 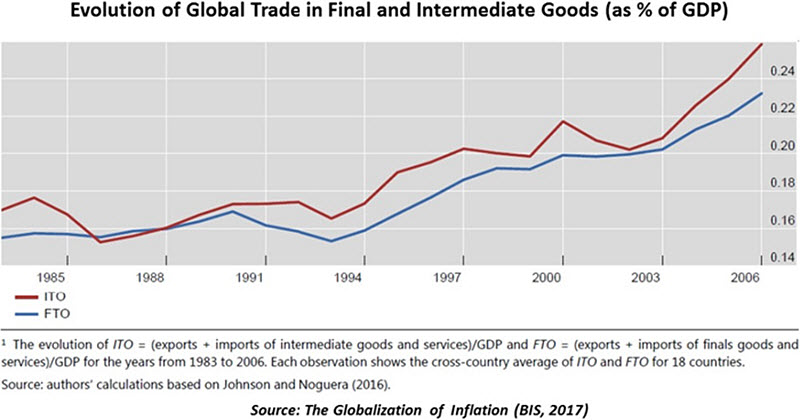 Indirect effects of globalization on prices can be even more powerful. The import content of U.S. personal consumption expenditures is less than 15 percent, but the influence of trade on the prices paid is much larger. Opening an economy to trade leads to competition at a global level and pushes down prices of domestically produced goods. The “threat” of cheaper imported substitutes keeps a lid on domestic production costs. Like the cost any other factor of production, wage growth (and its impact on overall inflation) is also kept in check through this mechanism.

It works something like this: slack in the Chinese economy keeps Chinese wages, and export prices, down — a phenomenon often called “exporting deflation.” Since U.S. producers compete in the same marketplace, they must either gain efficiencies or increase the import content of their value chains to remain competitive.

A recent paper by the Bank for International Settlements (BIS) documents the importance of global value chains in determining domestic prices. Their findings challenge the country-centric view of inflation and emphasize the need to look at the global output gap (actual output minus potential output) as a determinant of domestic inflation.

To illustrate this, the charts below plot U.S. inflation against the U.S. output gap (left) and against the global output gap (right). Each dot represents a year from the period 1985-2015. An upward sloping scatter would suggest strong positive correlation between the two variables. As we can see, the U.S. slack versus inflation scatter is quite dispersed, while the association with global slack is tighter and more positive.

To be sure, this is an asymmetric relationship, driven by both the direction of trade and the type of goods traded. Developing nations have a much larger impact on developed ones than the other way around, as the former have a competitive advantage in the production of goods.

The Federal Reserve was among the first to appreciate this. In the 1990s, Alan Greenspan cited a “new paradigm” as support for holding interest rates constant even as real growth accelerated. A later paper assessing import competition’s impact on U.S. inflation vindicated his observation. As a result of Greenspan’s prescience, the American economy entered what came to be known as the Great Moderation —an era of unprecedented price and output stability that lasted until 2008.


It will be interesting to see whether they take the same posture on proposed fiscal expansion that comes from within the Republican platform. Tax reductions and infrastructure expansion are unlikely to be deficit neutral, and the hawks in Congress could use the debt ceiling to pre-empt their advancement.

Democrats might consider blocking an increase in the debt ceiling if spending reductions are not to their liking. But they would do well to avoid another government shutdown, which tarnished the Republicans the last two times around. And the 2011 debate over the debt ceiling resulted in a rating downgrade of U.S. government debt.

President Trump has yet to share his current view on the debt ceiling, but he has been critical in the past of the willingness of Republicans to allow increases. Without leadership from the White House, an impasse may develop, which has the potential to upset financial markets.

There is no need for this kind of volatility. The United States is the only developed country with a limit on its borrowing capacity. Proponents note that the debt ceiling provides a useful checkpoint that focuses budget priorities. But since the debt ceiling has been raised 44 times since 1980, it really isn’t providing much discipline at all. We would be better off without it.

Economic projections are hard to assemble. They rely on a long series of assumptions that can certainly be questioned. They are based on past patterns which may not be a good guide to future performance. They are almost always wrong. But they are also absolutely essential.

There was controversy this week when the CBO released its analysis of American Health Care Act (AHCA). The AHCA is designed as the “replacement” for the Affordable Care Act, the sun-setting of which was a key campaign promise of the current administration. The CBO found that the AHCA would save $337 billion over the next ten years, but would also cost 24 million people their health care coverage.

Immediately after the report was filed, it met with ridicule from supporters of the new legislation. The integrity and intelligence of the CBO were called into question. Tom Price, secretary of the Department of Health and Human Services, stated that “The CBO report’s coverage numbers defy logic.”

To economists, though, the findings are entirely logical. Eliminating the mandate that people purchase health insurance and trimming the subsidies they receive will result in lower levels of coverage. While this would save the government money, society would to pay higher health care bills for the uninsured through taxes and insurance premiums.

The CBO has a well-deserved reputation for rigor and impartiality. Evaluating programs through an economic lens (however cloudy) reveals causes and effects that can be a useful guide to possible alterations. There are signals that this process is already working as intended.

The evaluation of the AHCA is only a warm up act for the review of larger proposals that headline the administration’s fiscal plans. As we head toward the main events, support for the CBO and economic analysis must be sustained.