The World Can’t Afford to Retire

Nine months after I started my first banking job, I got an official-looking letter from an insurance company I had never heard of. It informed me that I would be provided with a monthly annuity of about $60 upon my retirement, the result of the bank’s decision to close its pension plan. I filed the letter away without giving it much heed, since retirement seemed a long way off.

I didn’t realize it at the time, but that event was significant at a micro and at a macro level. The gradual fade of private pension plans has shifted responsibility for retirement preparedness to employees, a responsibility that some have not borne well. For the pensions that remain, the secular decline in global interest rates that began in the early 1980s has created new challenges to solvency. Today, with populations aging, the challenge of fulfilling retirement expectations is an immensely expensive problem.

Pensions are centuries old. Post-retirement payments were often offered as an incentive to military enlistees to fill out the ranks. Governments gradually offered these schemes to the general population as a means of combatting indigence among the elderly. Today, government pensions provide more than 60% of retirement income in the United States and Western Europe. 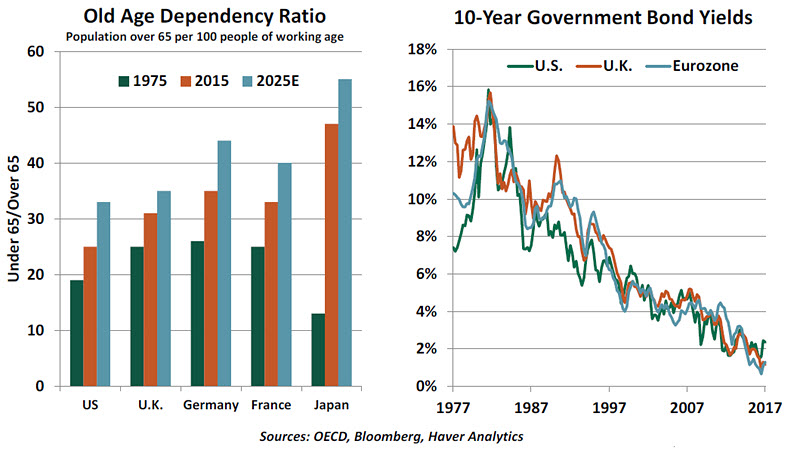 When beneficiaries are young and asset returns are ample, pension systems enjoy robust health. Given long time horizons, programs are free to invest aggressively, without much regard to the timing of prospective liabilities. Under these circumstances, funded ratios (which compare the values of plan assets to the value of benefit commitments) are easy to sustain.

But today, pension systems in the public and private sector are grappling with a perfect storm. With the ranks of retirees growing rapidly, plans have had to shift to fixed income investments just as interest rates are at generational lows. Pensioners are living longer, extending the annuity of benefits owed to them. Funded ratios are consequently slipping.

Well managed programs thought ahead, taking risk off the table by setting terms carefully and matching their prospective liabilities. Others weren’t so fortunate. Private sector pension backstops, like the Pension Benefit Guarantee Corporation in the United States and the Pension Protection Fund in the United Kingdom, have seen their caseloads grow and their financial positions tested.

Pensions in the public sector are a particular problem. In this arena, pension contributions compete with other fiscal priorities, and often are limited to keep budgets in balance. (This is a fundamental design flaw.) Proposed benefit reforms meet significant resistance and create a political furor. Aggressive investment strategies, aimed at digging out of the deep hole, haven’t been successful. 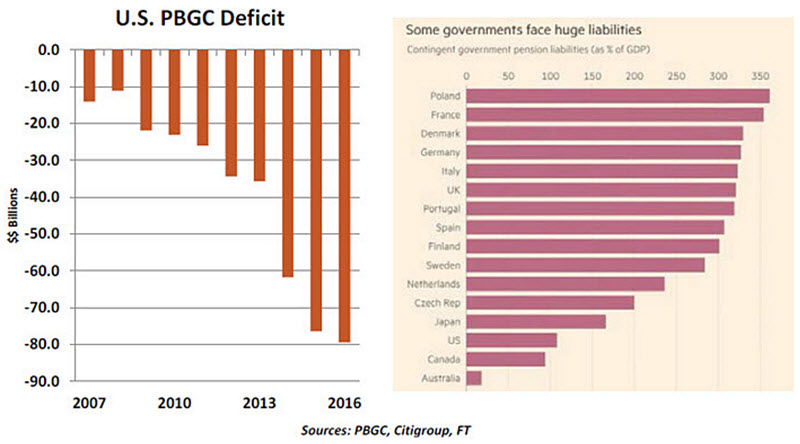 As a result, retirement obligations threaten the solvency of U.S. states and some national governments. Pensions remain a point of stress in negotiations over Greece’s debt restructuring, and Brazil must soon enact changes to its national pension plan to avoid a painful reckoning. These are not isolated incidents: a series of governments will need to think creatively to avoid seeing pensions bankrupt their economies.

The consequences of underfunded retirement systems will be wide-spread. Keeping pension promises will require significant amounts of revenue from taxpayers. The monies channeled in this direction will not be available for public investment, and high tax rates can be a deterrent to businesses and residents. Certain areas are already in a demographic death spiral, and others may join them.

Changing benefit formulas as a path to solvency will be exceedingly difficult. Broad communities of people around the world are reliant on their pensions, having set aside relatively little for their own retirements. The strain they feel has been, and will be, expressed at the ballot box. Challenging encounters between local governments and international financiers will likely become more frequent in the years ahead.

Defined contribution plans, which have replaced pensions in many sectors, are no panacea. These plans require participants to make intelligent choices about saving, investing and taking distributions when the time comes. Studies suggest that many struggle with these concepts.

To compensate, behavioral economists have intervened with default selections that participants have to take active steps to undo. This kind of “nudging” was once looked at as overbearing, but is now viewed as essential to avoiding bad outcomes.

While pension systems have acquired a bad reputation, they do include elements of intelligent design. They relieve individuals of responsibility for decisions they find difficult to make on their own. Pension professionals are in a much better position to do the calculations and formulate the strategies that maximize the chances of retirement security. It’s a shame that some custodians of these structures, primarily in the public sector, have done their constituents such a disservice.

The bill for bad decisions is now coming due. The invoice threatens global growth, creates dangerous generational divides, and invites financial instability. Demographic change and its impact on fiscal positions could be the most significant global economic issue of the coming generation.

My bank was one of the smart ones. By terminating its pension plan when interest rates were near their peak, the company was able to record a sizeable gain. But $60 per month is not going to pay my mortgage. The latest calculations suggest that I will have to work until age 85 before retiring … so you’ll have to put up with my writing for a long time to come.

It seems that move toward “cash-lite” if not “cash-less” systems is accelerating, with a considerable assist from governments.

At the end of last year, the Indian government retired 500 and 1,000 rupee notes ($7.50 and $15 at current exchange rates). The ECB has announced that it will be phasing out the €500 banknotes. Meanwhile, the Bank of England offered reassurance again this week that it has no plans to discontinue its £50 bank notes.

The policy thrust against currency (especially large denomination notes) has been driven by concerns over its use for illicit activity and tax evasion. As well, printing and retiring currency is costly for central banks, and paper currency remains subject to counterfeiting, despite improved designs.

It is estimated that nearly half of all U.S. dollars and euros are held abroad, a significant portion of which is likely being used for illegal activity. The Internal Revenue Service found last year that tax evasion in the United States amounted to an annual average of $458 billion between 2008 and 2010, or more than 40% of the combined Federal budget deficit for those years. The problem is even more acute in Europe, where income tax rates tend to be higher, with the European Commission suggesting that tax evasion levels reached about a trillion euros in 2012, or double the combined budget deficit of EU member states.

India lacks credible estimates of tax evasion or of illicit wealth kept in cash, but indicators such as the disparity between the consumption of luxury goods and the income tax payer statistics suggests that the number is high. Moreover, medium and small businesses in a cash heavy and informal economy like India rely on informal or kinship credit networks that exclude large sections of people. A “cash-lite” economic system backed up by better technological and banking infrastructure can be a nudge to formalize the economy, improve tax collection and expand banking coverage.

Future Proof Your Practice: Learnings from 2020

The Results of the Veres/T3 Annual Software Survey

by John Mauldin of Mauldin Economics, 4/9/21

So You Say You Market to Business Owners…

Ask Brad: Is a CFP About to Become a Requirement for RIAs?

How to Spot a Bubble