Our family was among the first to move onto the block where we live. At its first meeting, the homeowner association banned fencing between the lots. The hope was to encourage productive exchanges among the inhabitants.

A few years later, a family on the block relocated and was replaced by a couple who promptly began to erect a fence around the perimeter of their back yard. Called to account by the homeowner association, the new neighbors pleaded ignorance of the bylaws and offered the defense that “good fences make good neighbors.” A bitter conflict ensued.

It is certainly a stretch to use the events of a suburban subdivision as a metaphor for international economic stress. But there are some common elements between what we saw on our street twenty years ago and today’s debate over the North American Free Trade Agreement (NAFTA). Should exchanges be promoted, and are they mutually beneficial? Should members of a community begin with self-interest before attempting collaboration? Particularly in today’s atmosphere of high passion, these questions beg answers.

A huge fraction of U.S. imports and exports travel immediately north and south. Geography is certainly a contributing factor, and the benefits of proximity have been accentuated by the implementation of NAFTA in 1994. NAFTA eliminated most tariffs on products traded within the continent, paving the way for an immense increase in trade flows.

NAFTA was path-breaking in its marriage of two well-developed economies to an underdeveloped one. The arrangement with Mexico was destined to see capital flowing south and products flowing north. The data bear this out: U.S. direct investment into Mexico has grown from $15 billion in 1995 to more than $100 billion today, and exports from Mexico into the U.S. have grown by 370% during that interval.

The eventual hope was that improved economic conditions in Mexico would make it a substantial export market for the United States. That, too, has come to pass—but not quickly enough to prevent the accumulation of a $60 billion merchandise trade deficit. This number has been cited frequently in the debate surrounding NAFTA as evidence that the accord has gone horribly wrong.

But the story is more complicated. Some of the deficit represents parts sent from the U.S. to Mexico and later returned as finished products. American content makes up an estimated 40% of the value of U.S. imports from Mexico. These arrangements muddy the distinction between Mexican and American products. Further, trade in services is often overlooked; the U.S. is thought to run a considerable surplus with Mexico in that area.

Any analysis of NAFTA’s impact on the United States would be incomplete without including the direct and indirect returns investors have earned as a result of the treaty. Direct investments have certainly proved lucrative, and the performance of corporate profits and equity prices would likely not have been as robust without the opening of continental supply chains. Cross-border sourcing has also meant lower prices for consumers.

Much has been made of the U.S. manufacturing jobs lost to factories south of the border, and the new U.S. administration has taken aim at firms that continue to outsource. We’ve written that the decline of manufacturing jobs in the United States has had more to do with technology than trade. U.S. automakers have seen employment decline by a third since 1994, but the lion’s share of these reductions have resulted from the advance of robotics. Prospects for restoring employment by reshoring production may therefore be modest.

There are also an estimated 5 million American jobs dependent on trade with Mexico, so it has not been a one-way flow. And Mexican consumption of American goods has escalated in tandem with Mexico’s standards of living. 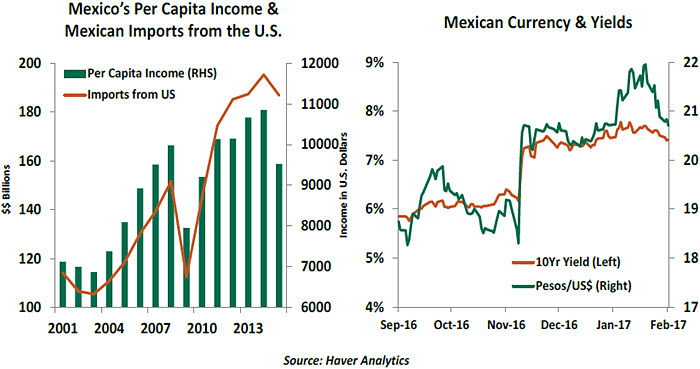 Improved economic prospects in Mexico have had a noticeable impact on northward migration. A Pew Center study finds that net migration was very large in the years before 2000, but has actually reversed since then. Ironically, steps to weaken NAFTA might cause renewed flight, which the U.S. administration is trying to discourage.

It is extremely hard to analyze the impact of a broad and complicated trade agreement. Outcomes are multifaceted, and must be compared with what might have happened in the absence of the accord. And opinions depend critically on one’s perspective. An idled line worker takes littles solace in academic work trumpeting NAFTA’s success.

As detailed in the article that follows, alterations to NAFTA would challenge Mexico at several levels. Reflecting this possibility, the Mexican peso has fallen sharply and Mexican interest rates have risen sharply over the past three months. Financial instability created a crisis in Mexico in 1994, and no one was asking for an encore afterwards. Mexican challenges could easily lead to American challenges, through several different channels.

The inventory of concerns enumerated here does not consider the third partner in this economic alliance. Canadian concerns are important, and we will return to them in time. For a whole host of reasons, modifying NAFTA is a step that should not be taken lightly.

Our incoming neighbors ultimately completed construction of their fence. The homeowner association had failed to properly file the bylaws with the county, rendering them not legally binding. But although the legal process ended, civil penalties continued: the community never really welcomed the newcomers. In that case, good fences did not make for good neighbors.

A Mexican standoff is a confrontation between two equally matched adversaries, where neither party can make a move without endangering itself. The current U.S.-Mexico impasse is not one of those: Mexico has the cards badly stacked against it.

Unravelling of the U.S.-Mexico trade relationship would be devastating for the Mexican economy. America is the destination for about 80% of all Mexican exports and about 27% of all Mexican economic activity. The U.S. is also the source of about half of all foreign direct investment in Mexico. Worker remittances from the U.S. to Mexico represent 2% of Mexican national income (not an insignificant sum), and they are critical for many poorer families. Even a marginal decline in trade and capital flows could have substantial macroeconomic implications.

On the other side of the ledger, a trade war would hurt American companies that remain globally competitive by locating parts of their supply chains in Mexico, and consumers who benefits from cheap cars, food, and clothes produced in Mexico.

Mexico does have some avenues of retaliation. It can stop cooperating on matters such as migration, drug trafficking and terrorism. If the U.S. ignores the rules of the World Trade Organization and imposes unilateral trade tariffs, Mexico could retaliate by disregarding U.S. pharmaceutical patents. Appropriation of American business assets in Mexico would be a “nuclear option.”

Nevertheless, Mexico has a weaker hand, based on the ill health of the Mexican economy. Growth continues to disappoint, despite the great hopes from Mexican President Enrique Peña Nieto’s economic reforms.

For an economy that exports oil, is a regional manufacturing hub, and receives large remittances, Mexico is unusual in running a persistent current account deficit. External debt has continued to rise as a consequence, and stands at a level relative to gross domestic product (GDP) last seen at the height of the 1994 Mexican “Tequila” Crisis. More than a third of local sovereign debt is owned by foreigners, a high ratio for an emerging market. The domestic financial system would be ill-equipped to replace these funds in case of substantial capital outflows. 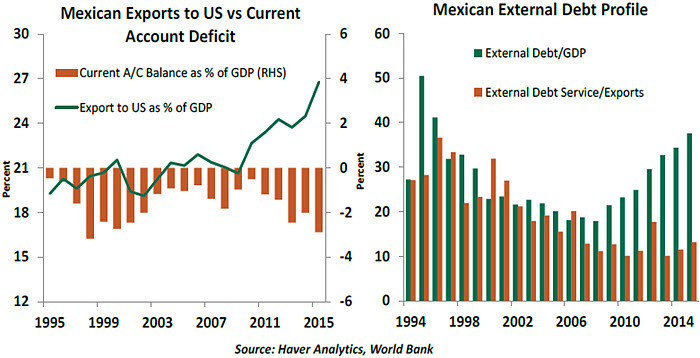 Policy options are limited. Elevated public debt limits the extent to which fiscal policy can step up — and long-term damage to Mexico’s trade relationships would render fiscal policy even less effective. The Bank of Mexico has been tightening policy to reign in the peso’s weakness, but has been cautious not to deploy its precious foreign reserves. The central bank would have its hands full as by tackling a weak peso, oil and exchange rate-induced inflation, an economic downturn and financial instability.

Mexico can take some succor from its foreign reserves, which are sufficient to either cover short term debt obligations two times over or pay for six month of imports. Mexico’s debt maturity profile is healthier than it was in 1994, limiting the scope for a short-term funding squeeze.

Unfortunately, the domestic political environment doesn’t bode well for an easy resolution with the U.S. president. Peña Nieto is fighting a battle for political survival, and presiding over economic upheaval would be the surest way to lose the 2018 election. It is likely that Mexico will have a new populist president next year, making U.S. trade relations even more complicated.

The acrimony may pass and a successful resolution may emerge. The two countries have come a long way together, and each stands to lose a great deal. But if things continue to go south, the potential for a damaging crisis will go northward.

The two key messages from the January employment report are that firms continue to increase payrolls and that wage growth is not threatening.

The unemployment rate moved up one notch to 4.8%, partly due to a two-tenths increase in the participation rate. The improvement in the participation rate is a desirable development, as it implies that favorable economic conditions are bringing back people to the labor force. The broad measure of unemployment increased to 9.4% from 9.2% in December. Part-time employment due to economic reasons fell in January. Low educational attainment remains a major impediment to further labor market progress.

Payroll employment rose 227,000 in January, after a gain of 157,000 jobs in the prior month. Annual revisions lowered estimates of job growth by 39,000 in November and December.

In the goods sector, the increase in construction employment (+36,000) stands out. Retail employment (+46,000) led the overall improvement in hiring in the service sector. The 192,000 increase in private sector employment includes payroll gains in health care, restaurants, finance and professional services.

Growth in hourly earnings slowed in January (+2.5%, year-over-year) after a stronger performance in December (+2.8%). Nineteen states raised minimum wages in January, but because only around 3.0% of the workforce is affected by this change, it had no visible impact on wage growth. Also, the Employment Cost Index, a broader of employment compensation, increased only 2.2% from a year ago in the fourth quarter. Taken together, these indicators of wages do not suggest that the labor market is stressed.

The combination of growth in hiring with modest wage pressures suggests there is no urgency for the Fed to change monetary policy in the near term. Their meeting this week was uneventful, and the March meeting may not be much more interesting.