Holiday Edition: Here Are the Top 6 Frank Talk Posts of 2016

This year has been one for the history books. Donald Trump was elected as the 45th president of the United States, gold had its best quarter in a generation, Warren Buffett decided he likes airlines again and voters in the United Kingdom elected to leave the European Union. Loyal readers of the Investor Alert newsletter and my CEO blog Frank Talk know that we covered it all, too.

As we head into the New Year, I want to share with you the six most popular Frank Talk posts of 2016. Before I do that, however, I think it’s important to note one recurring theme I write about that continues to help our investment team and shareholders better understand the movement in commodities and energy: the purchasing managers’ index (PMI).

Using PMI as a Guide

As I explain in this January Frank Talk, our research has shown that PMI performance is strongly correlated with the movement in commodities and energy three and six months out. PMI forecasts future manufacturing conditions and activity by assessing forward-looking factors such as new orders and production levels.

When a PMI “cross-above” occurs—that is, when the monthly reading crosses above the three-month moving average—it has historically signaled a possible uptrend in crude oil, copper and other commodities. The reverse is also true. When the monthly reading crosses below the three-month moving average, the same commodities and materials have in the past retreated three months later.

In the three months following a “cross-above,” oil rose about 7 percent, 75 percent of the time, based on 10 years’ worth of data. Copper, meanwhile, rose more than 9 percent most of the time. 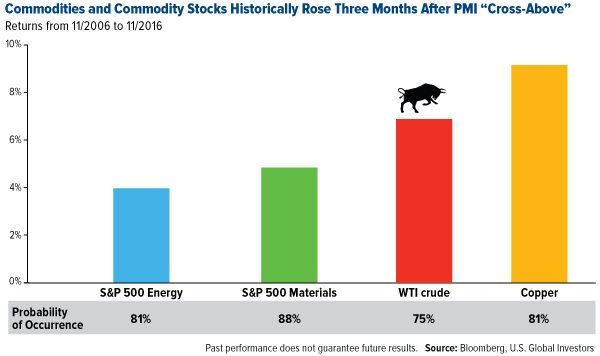 In November, the JPMorgan Global Manufacturing PMI reading clocked in at 52.1, a 27-month high. This shows that sector expansion has extended for a sixth straight month, which is very encouraging news. Following OPEC's recent production cut, we believe the decision is constructive for energy in the near-term, while a rising PMI is good news for the long term.

We are finally seeing major media outlets and other Wall Street thought leaders recognize the importance of PMI as well.

Every year I have the opportunity to engage and educate curious investors through my Frank Talk blog, and I am grateful to all of my subscribers who continue to stay engaged with the stories I share. Below are the top six Frank Talk posts of 2016 based on what you found most fascinating. I hope you enjoy this brief recap.

1. Gold Had Its Best Quarter in a Generation. So Where Are the Investors?

In April we were pleased to report that gold was having its best quarter in 30 years—rising 16.5 percent year-to-date at the time. During the first quarter, the yellow metal had its best three-month performance since 1986, mostly on fears of negative interest rates and other global central bank policies.

What we noticed, however, was an anomaly in terms of investor interest. Retail investors were very bullish on bullion but remained bearish on gold stocks.

This was a missed opportunity. Even though gold stocks have retreated since the summer, the NYSE Arca Gold Miners Index is still up 40 percent for the 12-month period. Over the same period, the S&P 500 Index is up only 10 percent, with the Trump rally driving most of it.

As you can see in the oscillator below, gold is currently down more than two standard deviations. In the past, this was a good time to accumulate, as mean reversion soon followed.

The 2-year Treasury yield, meanwhile, is looking overbought and set to correct, based on our model. The math suggests a nearly 90 percent probability that mean reversion will occur over the next three months, with yields falling and the gold price rising back to its mean.

What’s more, ICBC Standard Bank recently highlighted the growing costs of higher yields, which are being overlooked. Net interest payments on the nearly $14 trillion of U.S. debt will amount to around $250 billion this year—or 1.4 percent of U.S. gross domestic product. “If we apply an 80 basis point increase to the net interest forecasts,” the bank writes, “then by 2026 the Treasury would be paying an additional $185 billion in interest annually, and interest will have increased to 3.3 percent of GDP.” This could strengthen the investment case of gold.

2. What Brexit Is All About: Taxation (and Regulation) Without Representation

Just three days before U.K. voters went to the polls, I shared my thoughts on why those betting on the “stay” campaign might be surprised to find Eurosceptical Brits prevailing in the Brexit referendum. British citizens voted to exit the EU on June 23, a move that many were not expecting. One of the main grievances of voters was the heavy burden of EU regulations, which are decided by unelected officials in Brussels with little to no cost-benefit analysis.

According to Open Europe, a nonpartisan European policy think tank, the top 100 most expensive EU regulations set the U.K. back an annual 33.3 billion pounds, equivalent to $49 billion. 3. 11 Reasons Why Everyone Wants to Move to Texas

As a “Tex-Can”—born in Canada, living in Texas for the past 26 years—I am so blessed to call Texas my home. Although we are global investors, often focusing on macro-economic issues and government policies, I enjoyed writing this piece highlighting 11 reasons why Texas is truly a remarkable place to live. Did you know if Texas were its own nation, its economy would be about the same size as Canada’s? Back in October, the Organization of Petroleum Exporting Countries (OPEC) tentatively agreed to a production cut at its meeting in Algiers. Officials announced a “plan” to limit daily production, but I warned investors not to get too excited over OPEC’s decision at the time, since nothing was set in stone. Some OPEC members were already wavering, with Iraq questioning output numbers and Nigeria moving to boost production.

Fast forward to December. For the first time since 2008, OPEC has agreed to a crude oil production cut, renewing hope among producers and investors that prices can begin to recover in earnest after a protracted two-year slump.

Many people might have the impression that the top 1 percent of society—those making over $521,411—deal mainly in exotic investments such as derivatives, fine art and rare French wines. The truth is actually a lot less exciting—they invest in munis. Muni bond income, after all, is entirely exempt from federal and often state and local taxes—a feature that should appeal not just to money-saving, high-net worth individuals but to all investors. 6. Romania Did This, And Now It's Among the Fastest Growers in Europe

In July I wrote a piece highlighting a country I don’t always discuss—Romania. At the end of last year, and after years of tepid growth, Romania’s government moved to revise its tax code. The country reduced the value added tax (VAT) rate from 24 percent to 20 percent, lowered the income withholding tax rate, nixed a controversial “special construction” tax, simplified deductibles and exempted certain dividends from corporate income tax.

The changes have worked much faster than expected. In the first quarter of 2016, Romania grew 4.3 percent year-over-year, beating the 3.9 percent analysts had expected, and up 1.6 percent from the fourth quarter of 2015.

Keep Calm and Invest On

I want to end on one final point. Trump recently responded to the Berlin Christmas Market massacre—the perpetrator of which was just shot dead by police in Italy—saying the event validates his past support of banning Muslims from entering the country and creating a Muslim registry for those already in the U.S.

I’ve said before that people too often take President-elect Trump literally but not seriously, and I think this is one of those cases. I don’t believe he will literally ban all 1.6 billion Muslims from coming into the country, nor does he literally mean it. More likely such a ban would resemble President Jimmy Carter’s temporary cancellation of Iranian visas in response to the hostage crisis, but that’s mere speculation. The issue of Shia-Sunni relations alone is far too complex, with the schism as deep and nuanced as when Protestants broke from the Catholic Church in the 16th century.

But let’s say for a moment that Trump somehow succeeds in implementing a complete ban and creating a registry. These plans would not come cheap. One team of researchers estimated a ban would cost the U.S. economy at least $71 billion a year in lost spending on tourism, education and more. As for a registry, the similar National Security Entry-Exit Registration System (NSEERS)—created in response to 9/11 and dissolved this month by President Barack Obama—cost taxpayers about $10 million a year.

This is the very definition of the law of unexpected consequences, and it’s important to be cognizant of “the negatives of Trump’s anti-globalization ideas,” in the words of billionaire money manager Bill Gross. It’s for this reason that investors should remain diversified, in gold, equities and tax-free municipal bonds.

To all of our readers around the world, I wish you robust health, buckets of wealth and tons of happiness this holiday season! This week spot gold closed at $1,133.77, down $1.07 per ounce, or 0.09 percent. Gold stocks, as measured by the NYSE Arca Gold Miners Index, ended the week higher by 1.94 percent. Junior tiered stocks underperformed seniors for the week, as the S&P/TSX Venture Index fell 0.96 percent. The U.S. Trade-Weighted Dollar Index finished flat this week with a gain of just 0.05 percent.