Highlights of the Year

by Carl R. Tannenbaum, Asha Bangalore, Ankit Mital of Northern Trust, 12/17/16
SUMMARY
It’s been an extraordinarily eventful 12 months. We hope that you all have an opportunity to rest and reflect as year-end approaches. To those who are celebrating holidays this month, please accept our warm wishes for the season. And to all, our hopes for a prosperous new year.


We asked our contributors to offer thoughts on the economic themes that were most impactful in 2016. The following items stood out.

Looking Beneath the Surface

A main lesson to be learned from this year’s events is that we must pay attention to the texture of economic performance. So often, we content ourselves with aggregates and averages: the level of gross domestic product (GDP), the number of jobs created, the performance of the equity markets and median levels of income.

By those measures, the global economy hasn’t performed all that poorly since 2008, especially if one accounts for the headwind of deleveraging. But these overall signs of progress conceal the stasis, and even regression, endured by many groups within the world’s population. Hardened cores of unemployed, diminished saving and exaggerated inequality are a lingering legacy of the 2008 Global Financial Crisis.

It isn’t as if these issues were new in 2016; the French economist Thomas Piketty highlighted them three years ago in his book, “Capital in the 21st Century.” But politicians around the world have diagnosed latent discontent and fanned the embers to their advantage. 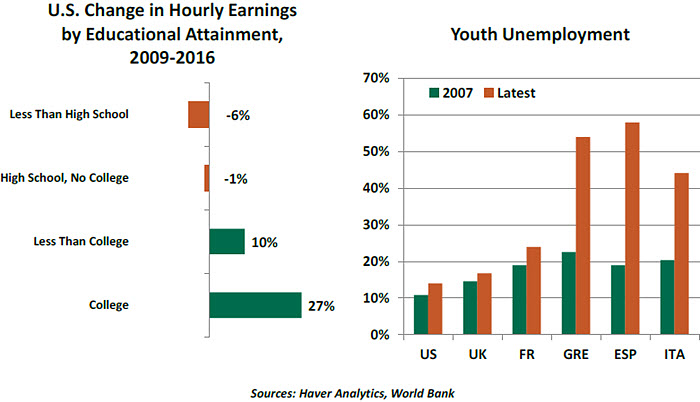 Not all populist movements are alike. In some countries, older groups are in the vanguard; in others, youth is demanding to be served. But they are united by skepticism of global trade, global immigration and global institutions. Their concern may be misplaced (technology may be a much more significant force for economic change), but their passion is intense. The aftermath of 2016 balloting, along with some key votes in 2017, will determine whether the new world order can long endure.

The euro was supposed to be an anchor of stability, relegating the never-ending series of currency revaluations in Europe to history. But the common currency has become a source of instability.

The euro was a triumph of political imagination over economic logic. Without associated fiscal and structural integration, a monetary union had inherent vulnerability. Despite non-existent growth, an interminable sovereign debt/banking crisis and rising public antipathy, Europe’s traditional politicians have pressed their unifying vision. 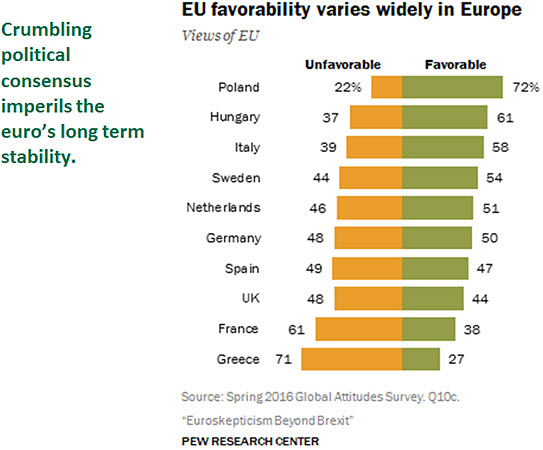 Voters have not responded well to this tactic. The European electoral cycle that began with the Italian constitutional referendum this month and will end in the autumn of next year with the German national elections will see the euro face one existential test after the other. Unless economic performance in Europe improves markedly in the years ahead, it will only be a matter of time before an anti-EU party wins in a major European capital.

It should be alarming that only a small majority of Europeans supports the euro right now. In any referendum on the membership in the euro, nativist rhetoric to separate would be seductive in a way that flagging the technical difficulties of departure can never be.

It was thought that a European coin would strengthen European identity. Leading French policy maker Jacques Rueff went as far as to say that “Europe would be created through the common currency or it will not be created at all.” Perhaps that was too much to expect from a few grams of copper.

Looking back, the year commenced with the Federal Reserve’s “dot chart” suggesting four rate increases in 2016. The Fed’s assessment was incorrect; it waited until the last meeting of the year to actually raise the policy rate.

A single weak employment report and the anxiety around the Brexit referendum crushed expectations of a higher federal funds rate in June. As September drew closer, the probability of the Fed moving the policy needle grew stronger as bullish economic data were visible. Several members of the Federal Open Market Committee expressed a preference to raise the rate at the September gathering. But, once again, the divided Fed passed the opportunity and stood pat, with only three members voting in favor of a higher policy rate.

The seemingly low threshold for delaying policy normalization frustrated many Fed watchers. For an organization that prides itself on taking a long view, the Fed seemed to be placing undue weight on short-term developments (most of which proved fleeting). Data dependence took a back seat to event risk.

The financial markets became skeptical of the Fed’s attempts to guide them. It wasn’t until relatively recently that any interest rate hikes became embedded in asset prices. But as we enter the new year, the markets and the Fed are more in line. Inflation is moving up, and the economy is close to full employment. The path forward from here seems clear - but there is no telling whether the Fed will follow it.

This year’s election outcomes were improbable. So were the market’s reactions to the results. The British voted to leave the European Union in June, defying polling results suggesting the contrary. Initial market reaction was as you might expect: the pound plunged and equity prices fell. However, in a matter of days, equity markets recovered.

A few months later, on the other side of the Atlantic, polls favored Hillary Clinton to win the U.S. presidential election. The Trump victory was a genuine surprise. But the adverse market reaction expected by many did not materialize. Equity prices are setting new record highs in the United States and the dollar continues to move up.

Most recently, the Italian preference against constitutional reform had the potential to jolt investors. The vote represents a genuine blow to the Italian economy. Italy’s banking system is fragile and the economy is weak. Markets once again shrugged off the outcome, and Italian equity prices are moving forward.

Electoral and market prognosticators are now engaged in cathartic self-examination. With more elections on the horizon, we should pause before embracing the polls. 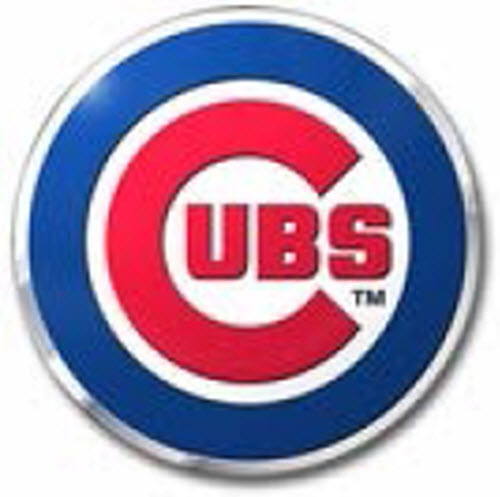 The Cleveland Cavaliers brought their U.S. city its first championship in more than 70 years. The Western Bulldogs won their first Australian Football League premiership since 1954. Leicester City topped the English Premier League for the first time ever, in improbable fashion.

And then there is the triumph of the Chicago Cubs, who ended a drought of 108 years by winning baseball’s World Series. The Cubs found themselves trailing three games to one in the final series, but went on to win the final three games and the title. Once lovable losers, these newly-crowned winners will now have to get used to an entirely different identity.

Early this year, the Bank of Japan joined the European Central Bank (ECB) and several others by taking its interest rates below zero. The collective thinking of these central banks was simple: if low rates are helpful to economic activity, negative rates might be even more so. By making it even more expensive for individuals and institutions to hold on to cash, capital would move into sectors that would be more supportive of growth.

The move backfired. Financial institutions were reluctant to pass along the negative rates to their depositors; the consequent reduction in their profit margins made them more reluctant to lend. Savers proved reluctant to increase their risk appetite, and negative rates only served to diminish their capital and force them to save even more.

Central banks have done yeoman’s work to support activity in the years since the Global Financial Crisis. But they may have pushed past the edge of their effectiveness. As we enter 2017, a rotation toward fiscal stimulus seems underway.

No central bank with negative interest rates has yet taken steps to return to zero. But expect them to do so at the first available opportunity.

China’s economic woes were front and center at the beginning of the year. Hard landing fears were introduced in early January by the combination of a significant stock market correction and a currency devaluation. Poor communication exacerbated the situation.

Chinese authorities responded by putting monetary and fiscal policies in place that worked to stabilize conditions. But the measures focused on short-term growth instead of long-term fundamental challenges.

As the year progressed, net capital outflows soared ($530 billion year-to-date) and China’s currency depreciation continued. The authorities have responded with capital controls and market interventions to limit the declines.

The intervention has a cost, because as long as the currency is artificially set, pressures on the capital account will persist. The focus should be on indebted state-owned enterprises, an impaired banking system and volatile property markets. 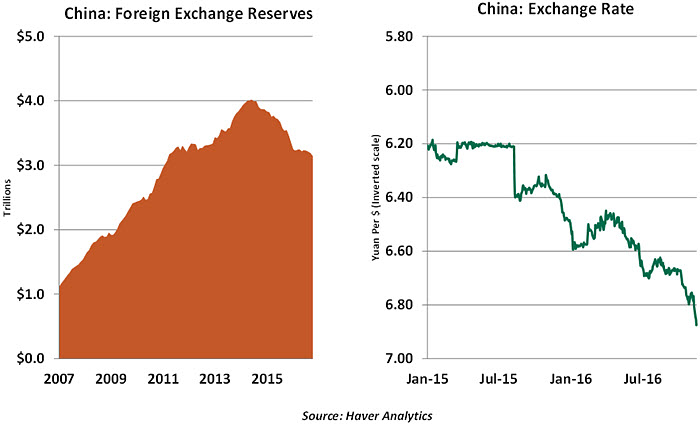 Beijing’s challenge is to manage growth and bring about deleveraging. The large increase in debt in a short period of time cannot generate enough profits for firms to service the debt. Japan is a case in point; it had too much domestic debt and growth collapsed.

Some have taken China off their list of top risks, but we continue to see a Great Wall of worry.

First, a half-decade long sovereign debt crisis in Europe; then Brexit and now the United States election—policy uncertainty has been on the rise in developed markets. Does that reflect an erosion of credibility in the world’s major economies? Credit rating agency S&P certainly thinks there is regressive convergence going on between developed and emerging markets.

We are skeptical. Sovereign credit ratings between the two have certainly converged, but that reflects the significant gains in institutional and policy frameworks in emerging markets—progressive converge, in other words. While it is certainly true that policy path has become more unpredictable in the developed world, it is far from clear whether that has had a material impact on the creditworthiness of those countries.

The scale of misbehavior in large emerging markets such as Brazil, South Africa, India and South Korea is remarkable and highlights the chasm between the levels of corruption in the emerging and developed markets. Furthermore, the former set continues to remain vulnerable to capital and currency controls in way that can seriously imperil creditworthiness. So, while it is important to be cognizant of the shift in the political consensus in the developed world, it would be reckless to overreact.