A wave of positive economic data suggests the Chinese economy is stabilizing and that business confidence is improving. The country’s purchasing managers’ index (PMI), which measures the health of its manufacturing industry, rose to 51.2 in October, handily beating economists’ estimates of 50.3. 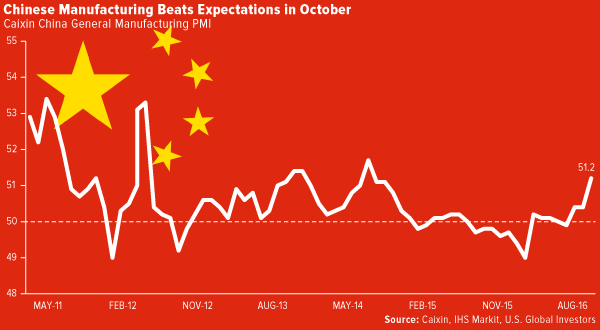 Expanding at its fastest pace since July 2014, the industry was stimulated by a strong rebound in new orders and higher commodity prices. Output rose to an incredible five-and-a-half-year high. And with backlogs of work beginning to pile up, manufacturers trimmed employees at the slowest pace in 17 months.

Also encouraging is the country’s third-quarter gross domestic product growth, which came in at 6.7 percent for the third straight quarter, all but assuring investors that the economy can achieve the government’s earlier guidance of between 6.5 percent and 7 percent. Higher business confidence helped maintain steady growth, “as proved by the rebound of medium to long-term corporate loans and reacceleration of private investment growth,” according to Singapore-based OCBC Bank.

Consumer spending appears to be robust. In the first nine months of the year, consumption contributed nearly 60 percent to GDP growth, with significant demand gains made in health care, education, financial products and entertainment.

Automobile sales jumped a phenomenal 32 percent year-over-year in September, the fourth straight month of growth exceeding 20 percent. Sales have been so robust—reflecting a rush to purchase new cars before the government’s reduction in sales tax on small vehicles expires at year-end—that new vehicle purchases in China are expected to surpass sales in North America for the first time ever this year.

Such a great number of cars on the road has resulted in famously massive traffic jams that turned miles of highways into parking lots. Some as many as 50 lanes wide, the very worst incidents in Beijing found hundreds of drivers stuck in lines for days. Beijing officials have recently proposed stopgap measures, but the nightmare congestion underscores the need for greater capacity, which will require even more investment from the Chinese government, not to mention untold amounts of cement, asphalt, steel and other materials.

But really, these are traffic jams you have to see to believe.

The market seems to like what it sees. The Shanghai Composite Index is back up to levels last seen in January, fueled by not only encouraging manufacturing data but also hopes the government will make good on its promises to support infrastructure spending and restructure state-run enterprises. Stocks recently signaled a bullish “golden cross,” when the shorter-term moving average crosses above the longer-term average. In a note this week, Goldman Sachs analysts reported they expect reforms to accelerate in the next few years as China transitions from a middle-income country to an advanced economy. Reforms include efforts to restructure or eliminate “zombie” state-owned enterprises and remove marginal capacity. New policies on how to address public corruption have also been floated.

Among ETFs focused on a single emerging market, China funds attracted the largest inflows in the month of October, with new money totaling $275 million, according to Citi Research data.

Inflows into Mexico-focused ETFs were a distant second, at $133 million, indicating a surplus of bets on a Hillary Clinton presidential win next week. (It should be noted, though, that since the FBI announced last week that it would be reviewing just-discovered Clinton emails, Mexico ETFs have turned volatile as the chances of a Donald Trump victory improve.)

Who Will Lead the SEC in a Clinton Administration?

While I’m on the topic of the election, I find it worth sharing that a shake-up at the very top of the Securities and Exchange Commission (SEC) could be unfolding in front of our eyes—with some potentially serious ramifications.

Massachusetts Sen. Elizabeth Warren, one of the most outspoken critics of Wall Street serving in Congress today, recently urged President Barack Obama to remove Mary Jo White as head of the SEC for, among other things, failure to fully implement the Dodd-Frank financial reforms.

The White House flatly rejected Warren’s request, but it raises a few questions: Is she positioning herself to run the SEC herself? Could Sen. Warren, a strong supporter of Clinton, be appointed as the new SEC chair if Clinton were to win? What effect would that have on capital markets?

Although pure speculation, the scenario is worth pondering.

Another Infrastructure Boom Ahead?

Much has been made of the Chinese economy’s transition from one driven by industrial production to one supported by consumption and services. While this shift is indeed taking place, China still remains the world’s largest engine for energy and materials demand, with support from a growing population and rising household income.

The country imported a record amount of crude oil in September, up 18 percent year-over-year, surpassing the U.S. for the second time in 2016. Averaging 8 million barrels a day, imports came close to the 8.6 million daily barrels the U.S. produces on average. I also would like to point out that China remains the world’s number one generator of electricity. The chart below shows just how dramatic capacity growth was in the first decade of the century. In 1990, the country’s electricity needs were equivalent to Latin America’s, but as its government pushed ahead with fiscal spending for huge infrastructure projects, demand blew past the continents of Europe and North America. Although infrastructure investment has declined overall from this period, there’s still plenty to get excited about. In the first eight months of 2016, infrastructure spending rose an impressive 19.7 percent over the same period last year, and in May, the government announced it would be pumping more than $721 billion into as many as 303 transportation projects over the next three years.

Two projects in particular are worth noting here. Construction on what will eventually be the world’s largest airport by surface area is currently underway in Beijing. Upon completion in 2019, the $12 billion airport, to be called Beijing Daxing International Airport, will serve as many as 100 million passengers a year, roughly in line with the world’s busiest airport, Hartsfield-Jackson Atlanta International Airport.

Then there’s the ongoing Belt and Road Initiative (BRI), one of the most ambitious undertakings in human history. With total infrastructure costs estimated at $5 trillion, the biblical-size trading endeavor—a sort of 21st century Silk Road—will cost 12 times as much as what the U.S. spent on the Marshall Plan to rebuild Europe following World War II. The initiative has the participation of 65 countries from Asia, Africa and Europe, and is poised to raise the living standards for more than half of the world’s population. “Though China’s pace of expansion has slowed from the double-digit rates seen in the first decade of the century,” writes HSBC’s Noel Quinn, Chief Executive of Global Commercial Banking, “its global influence—as the world’s second-largest economy and a trading powerhouse—is far greater than 10 or even five years ago. The country’s overseas investments are only likely to increase, further underlining its pivotal role.”

With the U.S. presidential election just four days away, London-based HSBC says gold investors should see a significant bump in price no matter who wins.

The bank sees a Trump victory more supportive of gold as a potential “protection against protectionism”—the New York businessman has been very critical of trade deals, including the North American Free Trade Agreement (NAFTA) and the proposed Trans-Pacific Partnership (TPP)—but a Clinton win could also help boost prices to as high as $1,400 by year end, HSBC says.

The yellow metal jumped above $1,300 an ounce this week after the Federal Reserve stayed pat on interest rates. It’s stayed in that range even with the mostly positive jobs report today, which tells me investors are feeling some anxiety as we draw closer to the election.

As always, I recommend a 10 percent weighting in gold—5 percent in bullion and coins, 5 percent in gold stocks. Rebalance every year.