The Myths of Manufacturing

A friend of mine recently retired from his job as a senior engineer at a local auto plant. A month before he left, he invited a few of us to take a tour of the assembly lines. For more than three hours, we worked our way from one station to the next, witnessing the intricate choreography of machines, parts and people. The sophistication of the assembly, aided by some very advanced technology, was amazing.

Over drinks afterwards, I confessed to being a little envious. Not about the fact that my friend was retiring, but because he had spent his career making things. It was easy for him to point to the output of his efforts and the ingenuity that he had applied to that output. This is something that those of us who work in service industries sometimes struggle with: it is harder for us to establish the value we add to the economy.

For these and other reasons, countries have a romance with manufacturing. Physical production is a tangible manifestation of economic strength, and factory work is frequently thought to be more accretive to a nation’s reputation. But some of the idyll that surrounds the shop floor can be overdone. As countries debate industrial policy, it is critical to move beyond nostalgia and focus on contemporary conditions.

2016 has not been the most robust of years for the global economy, but recent news on manufacturing has been upbeat. Among the more prominent leading indicators of economic performance is the purchasing managers index (PMI), which is available for a broad range of countries. While there are PMIs addressing the service sector, the survey that addresses manufacturing is followed much more closely. Rising PMI levels have long been a source of encouragement about global economic prospects. 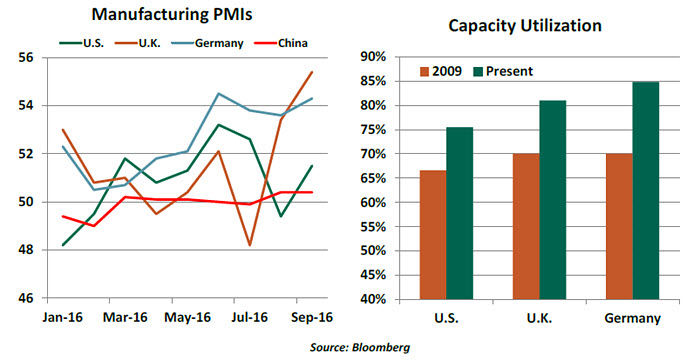 Factories in developed countries are operating at rates of capacity that are much higher than they were seven years ago, at the depth of the global recession. Industrial output in the United States is at an all-time record level.

There is an increasing body of evidence that manufacturing is “re-shoring” and returning to the U.S. from China and other competitors. The reasons for this are varied: labor costs in China have been rising, product reliability is uncertain, the long supply lines from Asia can be unpredictable and energy is more readily available from American producers than it was ten years ago.

Despite these positive trends, there is a broad sense that manufacturing is endangered, and this weighs on the public consciousness. Heavier industries have traditionally been paths through which hard-working women and men have ascended the socioeconomic ladder. Policymakers are keen to keep those avenues open in the name of egalitarianism.

Political candidates can therefore get a lot of mileage by promising more factories, more factory workers and higher wages for those workers. In the U.S., the Democratic platform suggests incentives for industrial projects, tax penalties for companies that ship jobs overseas and higher minimum wages. The Republicans are calling for more punitive tariffs on trading partners and much higher bars for new trade agreements.

Whatever the means, the ambition to create more manufacturing jobs in developed markets may be at odds with reality. Employment in the factory sector has been in decline for decades, even as output has continued to advance. The trend predates China’s rise as an industrial power. (In fact, it predates the rise of Mao Zedong.) 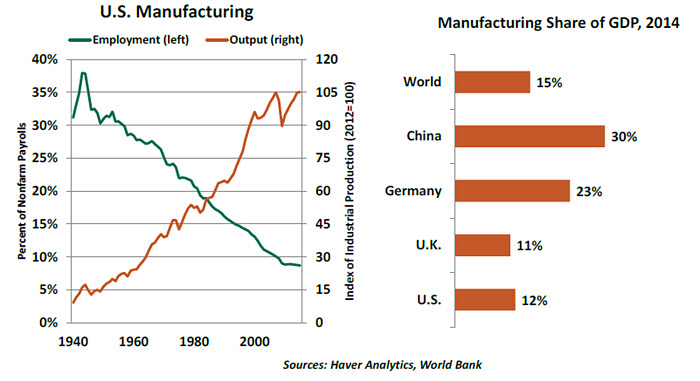 Technology, not trade, is the root cause of the disconnect. The application of computer-aided design has reduced defects and the need for human inspection or intervention in the production process. Those employees remaining in the plants typically need higher skill levels: instead of performing a task themselves, they have to monitor the instruments that do. A strong back and a high school diploma used to be sufficient for a manufacturing career and a path to the middle class. But no longer.

Among the lingering pockets of underemployment in the U.S. are mid-career professionals with more modest levels of education. Retraining is their best strategy for getting back to work. Some candidates have suggested that financing for this effort should be offered generously in order to transition workers from benefit rolls to payrolls. To the degree that trade arrangements (past and future) contribute to this challenge, additional increments of adjustment assistance could be considered.

With all of that said, manufacturing’s hold on candidates’ attention and the public consciousness remains out of proportion with its share of gross domestic product. Services have been in the ascendance for a long while in developed countries, and developing markets are likely to follow a similar path in the decades to come. China is embarking on an ambitious, but necessary, transition away from heavy industry that will be critical to its economic success over the coming generation.

Global economic strategy must devote additional attention to the service sector in all of its various dimensions. At the highest end, what’s the best way to foster technological innovation that can create new products, new jobs, or even new industries? And at the other end of the spectrum, what policies might support service workers like home health aides, who struggle to make ends meet and lack a voice in policy discussions?

The factories on the south side of Chicago had already started to decline when I first saw them as a boy. The transition for the neighborhoods and the industries was painful. But areas and industries that can take advantage of inevitable transitions will remain in the lead. Those that don’t will be left behind.

Challenges for the Kingdom

The override of President Obama’s veto of the Justice Against Sponsors of Terrorism Act (JASTA) is the latest blow to the Kingdom of Saudi Arabia. The country has faced three years of low oil prices, a faltering oil revenue strategy, a painful economic transformation program and now this. There is much to occupy the leadership in Riyadh.

Even though there is no proof of the complicity of the Saudi government in the 9/11 terror attacks, JASTA allows families of the victims to sue the Kingdom and permits U.S. courts to order the seizure of Saudi government assets in the U.S. as fines. The U.S.-Saudi relationship, built on oil, defense and mutual foreign policy interests, is perhaps at its lowest point in history.

While the White House has the levers to stay some of these actions, the Saudis could consider moving out of their large U.S. asset holdings as a precaution. According to official data, Saudi Arabia holds $96.5 billion in U.S. Treasury securities. A bulk sale of these assets could certainly have some impact on the supply and demand dynamics of these assets. Saudis are likely to go ahead with a planned multi-billion dollar sovereign debt issuance, but this latest development has given them time to pause and reassess their strategies.

Only a few days before the JASTA override, Saudi Arabia agreed to agree to a deal that emerged from the Algeria summit of major oil producers. Ever since oil prices started declining in late 2014, the Kingdom had pursued a policy of keeping up its oil supply and bearing the associated pain of low prices. The goal was to drive out high-cost producers, eventually see a revival of prices and enjoy the larger market share at those prices.

However, a prolonged economic slowdown, a steady decline in foreign reserves, and wide fiscal and current account deficits, combined with the prospect of lower-for-longer oil prices, has finally forced the government’s hand. While the government has been successful in bringing down the fiscal break-even oil price to $66.70 (International Monetary Fund estimate) from $94.80 in 2015, oil prices are still too low for the government to balance its books. Most recently, government ministers have been given a 20% percent salary cut while public sector perks and bonuses have been curtailed. The change in oil policy must be seen in this context.

It is unlikely that the Algeria deal would make any difference to the barrels of oil delivered to the market. We have previously expressed skepticism over a credible oil production freeze agreement in this space and see the Algiers agreement as part of a more sophisticated jaw-boning exercise by beleaguered oil producers.

OPEC’s commitment for a collective production target of 32.5-33 million barrels per day (mbpd) for late 2016 and 2017 might look like a cut from the current production level (33.24 mbpd). But once seasonality (output always rises during the summer) is accounted for, it’s a slight increase from the H1 2016 level (32.09 mbpd). Furthermore, Iran, Iraq, Libya and Nigeria retain the flexibility to reclaim their temporarily disrupted production capacity as part of the agreement. Russia, too, has not signed on to any formal agreement. Saudi Arabia, therefore, may be forced to undertake a very modest cut in its supply.

Nevertheless, oil prices have experienced a post-Algeria bounce, and the strategy seems to be paying off for now. Deputy Crown Prince Mohammed bin Salman had reassured earlier this year that oil prices were irrelevant for the Kingdom’s future. But the Kingdom is following through on its Vision 2030 plan, and its centerpiece, the National Transformation Program, was unveiled in Jeddah last week. It laid down some ambitious targets for creation of a non-oil sector and private sector jobs. The events of the last few days underline why the success of these plans is crucial for the Kingdom’s prosperity.

The September U.S. employment report was not earth-moving, but it was very acceptable. The mix of data continues to paint the labor market in a positive light.

Because the labor force surged by 444,000 individuals, the unemployment rate inched up to 5.0% in September from 4.9% in the prior month despite an increase in the number employed. The higher participation rate bodes well for the economy, as it indicates discouraged workers are returning to the labor market. The pool of workers who would prefer to work full time but can only find part-time employment fell in September and the share of long-term unemployment hit a new cycle low (24.9%).

Payroll employment rose 156,000 in September, while net revisions of hiring in July and August led to 7,000 fewer jobs. Although the 3-month moving average at 192,000 indicates slight deceleration in the pace of hiring, only about 100,000 new jobs are necessary to keep the unemployment rate steady. The September count should not be taken as a sign of weakness in the labor market.

Hourly earnings climbed 2.6% in September, an improvement which, when combined with employment gains, translates into a solid increase in income. The upward trend of employment and income supports expectations of forward momentum of consumer spending in the near term.

Politicians hoping for either very good or very bad economic news to press their cases with voters will find little conclusive in today’s report. The October employment report, scheduled for publication on November 4, provides one last opportunity for spin before the balloting, which takes place four days thereafter.

The November Federal Open Market Committee meeting will take place too close to the presidential election for the Fed to institute a policy change. Yet the Fed will have two more labor market assessments prior to the December meeting. If the results are similar to those we received today, there should be sufficient grounds to justify a higher policy rate.