As a young man, my neighbor was the victim of an industrial accident that damaged his knee. The surgery to repair the injury required a long hospital stay and painful rehabilitation. He worked diligently to maintain his mobility, taking up cycling to strengthen his leg.

Late last year, though, the discomfort became too great and he went in for a knee replacement. He was up and walking within hours of the operation, and the rehabilitation was much less painful than it had been 30 years earlier. He is back to riding; the straightening of his leg proved a convenient excuse to purchase a new $10,000 ride. Bionic joint, bionic bike, he told us.

But my neighbor hadn’t completely escaped the pain of his hospitalization. Within days, bills the length of encyclopedias began arriving at his house, written in language he barely understood. Fortunately, he has good insurance, but he was left to cover considerable copayments.

This story, repeated many times daily, illustrates the contradictions in the American health system. For those with access and insurance, treatments have never been better. But the cost of medicine in this country is becoming unsustainable, and many still don’t have access to adequate coverage. For these and other reasons, health care is one of the key economic issues in the 2016 election campaign.

Covering the subject comprehensively would require far more space than we normally allot to our weekly musings. In the main, it seems clear that the system’s costs and benefits are dangerously misaligned. The United States spends much more of its national income on health care than other developed countries. And the return on this investment, whether measured by life expectancy, infant mortality, cardfiovascular fitness or other metrics, is generally worse than what is seen elsewhere. 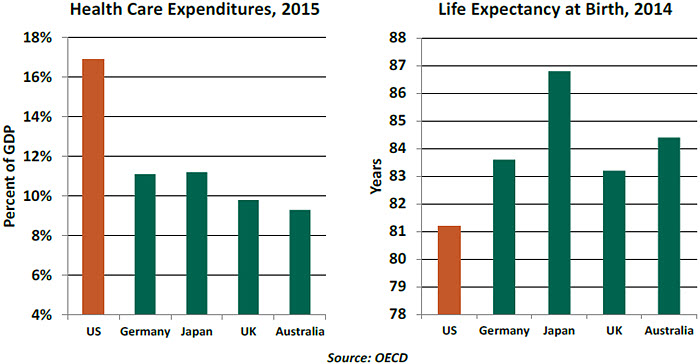 The bill for health care in the United States is projected to exceed 25% of gross domestic product (GDP) over the next 25 years. Demographics are a driver, but studies suggest that the rising costs of individual therapies are also a significant contributor. As well, our citizens (on average) are less healthy and therefore cost more to care for.

Determining the root causes of our healthcare affliction is far more complicated than diagnosing patients. Among the leading contributors to cost escalation are:

The Affordable Care Act (ACA), passed in 2010, attempted to contain the cost of care while extending coverage to those who were uninsured. From its passage to the present day, the ACA has been extraordinarily controversial. Objections range from the functional (it won’t work) to the constitutional (it has survived two Supreme Court challenges). 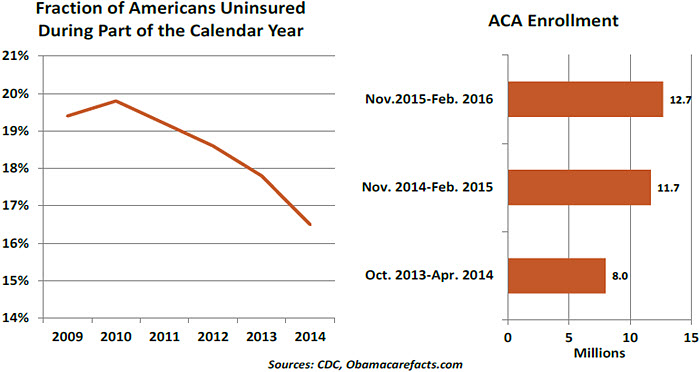 ACA enrollment has moved the needle on coverage for the uninsured. But sign-ups have not met initial projections and analysis suggests that self-selection has brought the program fewer young and healthy people. Insurers have been losing money on their ACA businesses, and are withdrawing from ACA exchanges.

The Republican platform calls for repealing the ACA and replacing it with more of a free market system. Dismantling the ACA would represent a substantial administrative challenge, and relying on consumer choice would represent a significant conceptual challenge. Most Americans have a difficult time comprehending health care, and often make decisions about it under considerable duress. Rather than providing more cost discipline, further fragmentation of demand could cause costs to rise.

The Democrats have called for opening Medicare to paid enrollment for people as young as 50 years old. That would certainly make care available to many more, but at what cost? As mentioned earlier, Medicare’s fee-for-service structure will create substantial long-term budget challenges in its current form. Adding more enrollees could make this problem far worse.

Because most working Americans get their insurance through their emfployers, the cost of care has become a disincentive to full-time hiring. Some want to take this responsibility away from business, but many would also prefer that the government not take up the slack. This leaves individuals on their own in an arena where poor understanding could lead to poor choices.

My neighbor fell off his bike recently, leading to yet another expensive encounter at the hospital. Like our healthcare system, he needs to maintain better balance.

As mentioned above, the rising cost of health care is a serious issue for the United States. Healthcare inflation trends are critical to America’s fiscal outlook: Medicare, Medicaid, and subsidies related to the ACA and Children’s Health Insurance Program account for 25% of the federal budget. Bending the cost curve just a little can have substantial fiscal benefits in the long term. And medical expenses are an important element of the overall inflation picture, on which the Federal Reserve is intently focused.

The two major inflation indexes present very different trajectories for healthcare inflation. The reason is that they tackle the problem at different levels. The consumer price index (CPI) covers medical costs borne by consumers, which are limited to out-of-pocket expenses related to medical care, such as co-pays and insurance expenses. The personal consumption expenditure price index (PCEPI) goes beyond those elements to include employer insurance costs and government healthcare expenditures such as Medicare and Medicaid.

For both, measuring medical prices is complicated by the challenge of adjusting for quality. Accounting for new features and improved performance is straightforward when assessing car prices, but elusive for complex services such as hospital stays.

Healthcare expenses in the CPI are 4.9% higher than they were a year ago. But healthcare prices in the PCEPI have risen by just 1.0% in the last 12 months. There is a 3.9 percentage point difference in healthcare inflation between CPI and PCEPI.

Healthcare inflation in the CPI has exceeded the corresponding reading in the PCEPI persistently over the past several years. Factors behind this development include cost shifting on the part of insurance providers and an advancing preference among some workers for low-premium, high-deductible plans. These elements tend to increase out-of-pocket costs for consumers without much impact on the overall cost of health care (which is the focus of the PCEPI).

Further, the ACA trimmed healthcare inflation by introducing strong regulatory controls that prevented premiums from increasing rapidly. Coverage expansion under the ACA stemming from an increase in Medicaid enrollment is another factor holding down the PCEPI because Medicaid pays health providers less than private insurers do. In addition, recent budget sequestration capped reimbursement levels under Medicare, which visibly flattened the cost curve for hospital prices (see below).

The comprehensive nature of the healthcare component in the PCEPI justifies its place as the Federal Reserve’s preferred index. As well, consumers typically do not think of health care when forming their inflation expectations, so focusing too much on trends in the CPI is probably unnecessary. From the perspective of the PCEPI, health care is not pressing overall inflation toward the Fed’s 2% inflation target.

So where are things going from here? The answer is impactful; studies have demonstrated that modest differences in healthcare inflation can create huge differences in the ratio of debt to GDP in the coming decades. The discipline on costs in Medicare can restrain medical inflation as more and more Americans transition from private coverage to public coverage when they retire, if past practices prevail. Drug prices may be an important frontier; they have been rising sharply, and Medicare is forbidden by law from negotiating discounts.

Policies can and do change over time; but any modifications to our medical system must retain the cost consciousness that has advanced over the past decade.

A person in Western Europe or a Canada can expect to live on an average three years longer than someone in the United States, with lifetime healthcare costs that are nearly half as large. On average, 115 per 100,000 Americans die every year due to healthcare neglect, compared to 76 in the rest of the developed world. No wonder Americans are also the most dissatisfied with their healthcare system. Three quarters of Americans favor radical change to the health system, compared to around half in other rich countries.

America also is one of the few developed countries without universal health care. Though there is significant heterogeneity in global healthcare systems, the United States stands out for its low level of public sector support.

State support can take many forms, from sponsorship of the entire system to micromanagement like capping charges and subsiding prescription costs. Predictably, though, public health systems also are often associated with long waiting times, lower quality (in some cases) and lengthy hospital stays. Many people in developed countries with nationalized systems end up buying private insurance just to jump the queue for procedures and operations.

us A highly public funded system is expensive and unsustainable without higher taxes. Japan is a case in point: the Japanese government bears 85% of all healthcare costs. Healthcare expenditures in that country have increased from 6.4% of GDP to 11.2% as the proportion of the population above 65 years of age has gone from 14.5% to 26.7%. The average length of hospital stays in Japan — 17 days versus 5.4 in the United States — is also the highest in the developed world.

On other end of the spectrum, poorer countries such as India or China have some type of universal health care. But the quality of public healthcare infrastructure tends to be substandard. People of means are forced to rely on private health care, while the poor are left with limited options. There has been a global debate about the role of health care in a society. Is it a basic human right that should be provided universally at an equal depth for everyone? What should the role of markets be in this very unique sector of the economy? There is a wide span of answers to these questions around the world, but none are entirely correct.
© Northern Trust
www.northerntrust.com

by Nouriel Roubini of Project Syndicate, 4/14/21